Egyptian-brokered ceasefire between Israel, Hamas comes into effect in Gaza 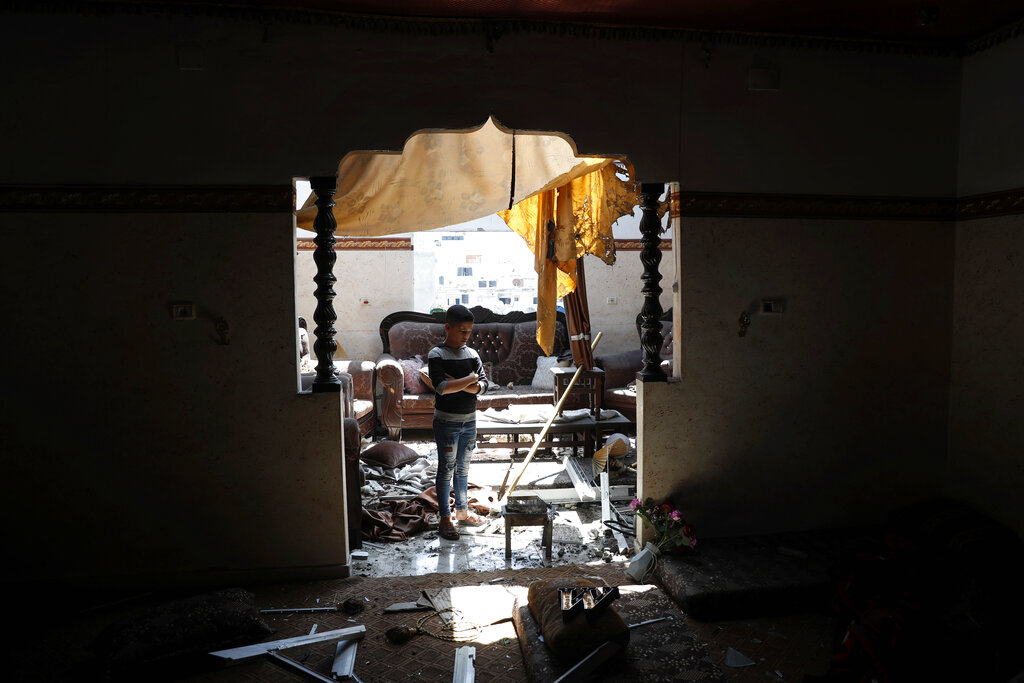 A child looks at the damaged room of his family apartment after by Israeli airstrikes near a residential building, in Beit Lahiya, Gaza Strip, Thursday, May 20, 2021. (Photo: AP)

GAZA, May 21 (Xinhua) -- An Egyptian-brokered ceasefire agreement came into effect early on Friday at 2:00 a.m. Palestinian time between Israel and militant groups led by the Islamic Resistance Movement (Hamas).

As soon as it turned 2:00, loudspeakers of the mosques all over the Gaza Strip shouted Allahu Akbar (God is great) celebrating the end of more than 11 days of tit-for-tat trade of fire between Israel and Hamas-led militants in the Gaza Strip.

Militants fired into the air, while tens of thousands of people took to the streets, while whistling and shouting Allahu Akbar.

Earlier on Thursday, Hamas armed wing announced that it halted firing rockets in response to an Egyptian-brokered ceasefire reached with Israel. Qatar, the United Nations and other countries joined the mediation.

Spokesman of al-Qassam Brigades, Hamas armed wing, said in a short recorded speech aired on the movement's Al-Aqsa Television that Hamas militants halted firing rockets at Israel in response to the ceasefire agreement.

"We had prepared strikes of rockets that cover all (Israel) from the city of Haifa in the north to Ramon in the south, but we responded to the ceasefire to watch the enemy's behavior until 2:00 a.m.," said spokesman Abu Obeida.

He added that "starting the rockets strikes depends on the behavior of the enemy (Israel) of totally halting its aggression on our people in the Gaza Strip."

Abu Obeida also said that "the leaders of the occupation (Israel) are under a real test and the decision to resume the rockets strikes on all Israel is on the table."

Earlier on Thursday, several Hamas leaders announced that the Egyptian mediator informed the movement that a ceasefire was reached with Israel and it will come into effect at 2:00 a.m. Jerusalem time.

Israel said that 12 Israelis were killed and more than 100 injured by the rockets fired from the Gaza Strip at towns and cities in central and southern Israel.

On Thursday, the health ministry in Gaza said that 232 Palestinians were killed, including 65 children, 39 women and 17 elderly, adding that 1,900 were injured in the last 11 days of Israeli-Palestinian tension in the Gaza Strip.