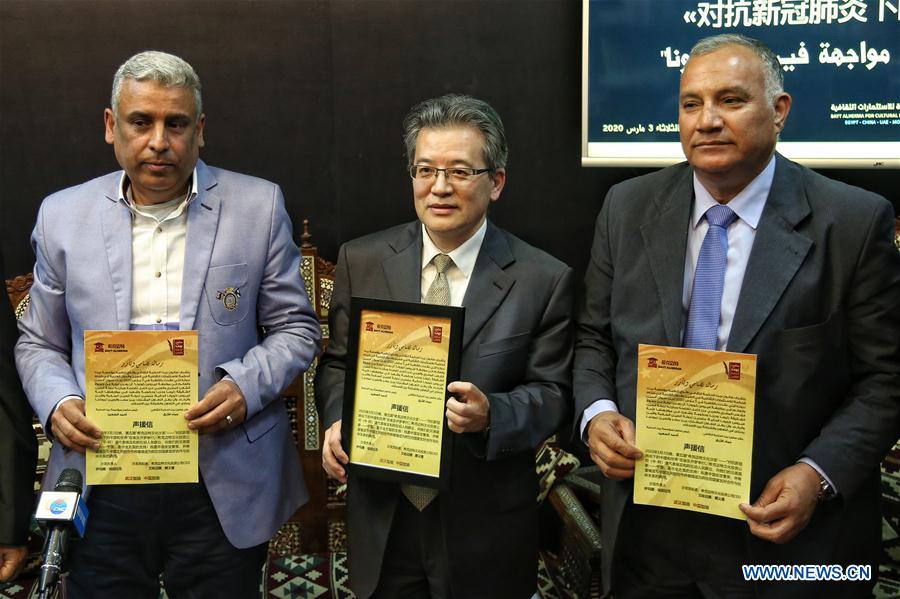 Li Dong (C), minister counselor of the Chinese embassy in Egypt, poses for a group photo with Egyptian participants during a symposium themed "China and the World Challenge Coronavirus" in Cairo, Egypt, on March 3, 2020. (Photo: Xinhua)

CAIRO, March 4 (Xinhua) -- Egyptian experts have applauded China's all-out efforts in combating the novel coronavirus, as well as its transparency and credibility in dealing with the epidemic.

The experts made the comments at a symposium, themed "China and the World Challenge Coronavirus," which was organized on Tuesday by Cairo-based Wisdom House Culture and Media Group.

"China has been fighting the virus on behalf of the world," said Hassan Ragab, dean of the Faculty of Language and head of the Confucius Institute at Egypt's Suez Canal University.

He noted that China has spared no efforts, money or knowledge to fight the virus (COVID-19), and "tackled the ordeal with transparency and credibility."

"Though hundreds of millions of its people have stayed at home and worked via the internet, China has succeeded in maintaining work momentum," he said.

Ragab expressed his confidence that "China will soon announce victory over the virus."

Speaking of the ongoing visit to China by Egyptian Minister of Health Hala Zayed, Ragab said that there are a lot of opportunities for bilateral cooperation in the scientific research field and in the fight against the virus.

Assigned by Egyptian President Abdel-Fattah al-Sisi, Zayed flew to China on Sunday to convey Egypt's solidarity with China in combating the novel coronavirus.

Mostafa Ibrahim, vice president of the Chinese-Egyptian Business Council, said the outbreak of the coronavirus reflected that under any circumstance the world couldn't live without China, which has far-reaching exchanges with the rest of the world.

Ibrahim said that many countries now realized the importance of China as the engine of global development and growth, as it plays a powerful role in world's economy and trade.

Despite the virus outbreak, Ibrahim said it is expected that China will achieve a growth rate of 4 percent in the first quarter of the current fiscal year, compared to only 2 percent by the U.S. economy.

Ahmad Sallam, former media consular at Egypt embassy in Beijing, also voiced his support for the Chinese people who have taken extremely strict precautionary measures for nearly two months to stop the spread of the virus.

He noted that Zayed's visit to China will benefit Egypt, which has confirmed only two cases of COVID-19 so far.

On Tuesday, Zayed said in Beijing that she had received the sixth edition of the guidelines on coronavirus diagnosis and treatment, as well as 1,000 virus scanners donated by China.

Li Dong, minister counselor of the Chinese embassy in Egypt, told the symposium that the virus is a challenge for the international community and not just for China, which has taken the largest share of responsibility in fighting it.

He said that China has taken all needed measures to meet its international obligations and responsibilities in the fight against the coronavirus.

"A friend in need is a friend indeed," Li said, referring to Egypt's generous help to China in fighting the virus.

Egypt has donated tons of medical supplies to China to combat the virus. Egypt also lit up on Sunday evening three famous historical sites in red and golden stars to resemble the national flag of China as a sign of showing solidarity.

Li received a written letter of solidarity from the Egyptian participants of the symposium.