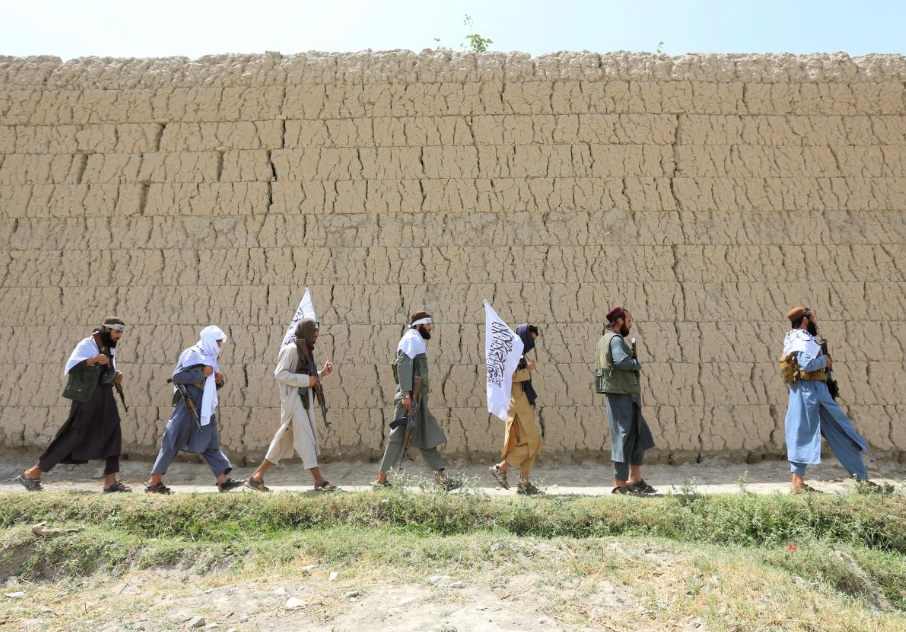 The Afghan Taliban said their three-day Eid ceasefire, which ends on Sunday, proved the unity of their movement and its “wide national support” as the presidential palace extended its own ceasefire with the militants by 10 days.

Taliban fighters headed into cities across Afghanistan over the weekend as they celebrated their Eid cessation of hostilities with feasts, hugs and selfies, raising questions about what happens when their ceasefire ends at midnight (1930 GMT) on Sunday.

“Mujahideen throughout the country are ordered to continue their operations against the foreign invaders and their internal puppets as before,” they said in a statement.

“The announcement (of the ceasefire), implementation and the wide national support and welcome of the Mujahideen by the people proves that the demands of the Islamic Emirate and the nation are identical – all want the withdrawal of foreign invaders and establishment of an Islamic government,” they said.

“...Our enemies used to propagate that 20 different groups operate against them in Afghanistan or that the Islamic Emirate is not cohesive and unified. But it has now become abundantly clear to everyone that this assertion is baseless...”

President Ashraf Ghani said on Saturday he would extend the government ceasefire beyond June 20 and on Sunday the presidential office said it would be extended by 10 days.

Some have criticized his move, which allowed the Taliban to flow into cities across the country, though the militants said they would withdraw by sunset on Sunday.

“I have seen several Taliban vehicles and motorcycles leaving the city today in the afternoon,” Sohrab Qaderi, provincial council member of Nangarhar province in the east, told Reuters.

Ghani had committed “a grave mistake” by allowing Taliban fighters to enter government-controlled areas, said Amarullah Saleh, a politician and former head of the National Directorate of Security.

“We don’t have mechanisms in place to mitigate the breach of ceasefire by the Taliban,” Saleh told Reuters.

Members of parliament opposing Ghani’s move said he had not consulted politicians and would be left with no recourse if the Taliban rejected his impromptu request.

A senior Western diplomat in Kabul earlier said Ghani’s decision was “a bold move” but questioned what happens if the Taliban do not extend their halt in hostilities against government forces.

“The consequences could be disastrous,” he said.

A suicide bombing in Jalalabad, close to the governor’s office in Nangarhar province, killed at least 18 people on Sunday and wounded scores, an official and doctor said.

A car bomb killed 36 people at a gathering of Taliban and Afghan armed forces in the same province on Saturday. Islamic State, not covered by the government ceasefire, claimed responsibility for that attack.

“NO CLUE HOW MANY TALIBAN IN CIVILIAN AREAS”

Western diplomats based in Kabul said they were issuing fresh travel warnings for the country.

“The Taliban can always use a ceasefire as an opportunity to attack foreigners,” one Western diplomat said. “Nobody has any clue how many Taliban militants are now hiding in civilian areas.”

The Taliban also said the “entire nation” should realize that there are “no public or secret talks taking place with the puppet Kabul regime”.

“All the baseless propaganda and attempts to confuse public opinion by the opposition in this regard only serves to complicate the ongoing crisis and negatively impacts efforts for peace,” the group said.

US Secretary of State Mike Pompeo, echoing Ghani’s announcement on Saturday, said peace talks would have to include a discussion on the role of “international actors and forces”.

“Ghani has full blessings of the US administration and it is crucial for the US officials to prove that (US President Donald) Trump’s policies are working and talks with the Afghan Taliban are imminent,” said a senior diplomat who met Afghan officials on Sunday to discuss the chance of back-channel talks with Taliban leaders.

The United States wants Pakistan, which it accuses of harboring Afghan Taliban commanders, to exert more influence on the group to bring it to the negotiating table.

The only time direct talks between the Afghan government and the Taliban have been held, in 2015, they broke down almost immediately.

The Taliban are fighting US-led NATO forces combined under the Resolute Support mission, and Ghani’s US-backed government to restore sharia, or Islamic law, after their ouster by US-led forces in 2001.

But Afghanistan has been at war for four decades, ever since the Soviet invasion in 1979.

“What we witnessed over the last two days was an overwhelmingly positive response by all Afghans to peace,” Lt-Colonel Martin O’Donnell, a spokesman for Resolute Support and US Forces-Afghanistan, told Reuters.

“Not even the attack on peace yesterday in Nangarhar by the enemies of Afghanistan will slow the nationwide momentum or quiet the celebration of a long-overdue cessation of hostilities and a chance for lasting peace.”

The Taliban roam huge swaths of the country and, with foreign troop levels of about 15,600, down from 140,000 in 2014, there appears little hope of outright government victory.