WASHINGTON, Aug. 23 (Xinhua) -- Nearly 80 percent of respondents are in favor of employers requiring their employees to be vaccinated against COVID-19 before returning to the workplace, according to a National Association for Business Economics (NABE) survey released Monday. 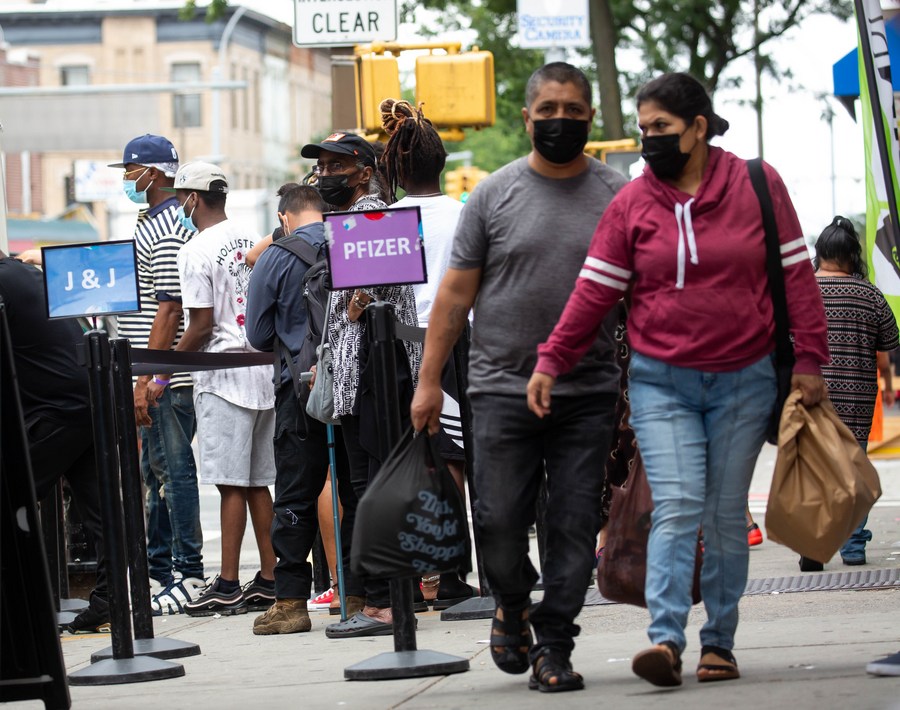 People wait in line at a mobile COVID-19 vaccination center in the Brooklyn borough of New York, the United States, Aug. 18, 2021. (Xinhua/Michael Nagle)

A "substantial majority" of respondents, 79 percent, is in favor of employers requiring their employees to be vaccinated against COVID-19 before they return to the workplace, showed the semiannual economic policy survey, administered between Aug. 2 and Aug. 10.

Fourteen percent of respondents are opposed to such a policy, according to the survey, which summarizes the responses of 227 NABE members.

NABE President Manuel Balmaseda, who is also chief economist at CEMEX, noted that panelists' views are "split" on whether fiscal and monetary policies are 'too stimulative,' or 'about right'."

The panelists' views on whether current monetary policy should address the recent spike in inflation are split, the survey showed. Slightly less than half (47 percent) believe the central bank should not take action, while 49 percent think it should.

Among that 49 percent, there is disagreement as to which primary tool policymakers should use to tackle inflation: 26 percent suggest tapering asset purchases, 5 percent suggest interest rates should be raised, and 18 percent believe that both tools should be implemented.