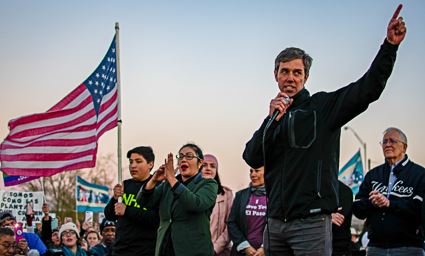 More than 100 people marched through the Texas border city of El Paso on Saturday, denouncing racism and calling for stronger gun laws one week after 22 people were killed in a mass shooting that authorities say was carried out by a man targeting Mexicans.

Chanting “gun reform now,” ″ El Paso strong” and “aquí estamos y no nos vamos” — Spanish for “here we are and we are not leaving” — the marchers included Hispanic, white and black people dressed in white to symbolize peace and carrying 22 white wooden crosses to represent the victims of the shooting at an El Paso Walmart.

The man charged in with capital murder in the attack, 21-year-old Patrick Crusius told investigators he targeted Mexicans at the store with an AK-47 rifle, an El Paso detective said in an arrest affidavit. Federal prosecutors have said they’re weighing hate-crime charges.

A survivor of the shooting, Jessica Coca Garcia, spoke to those gathered at the League of United Latin American Citizens’ “March for a United America.”

“Racism is something I always wanted to think didn’t exist. Obviously, it does,” Coca Garcia said after rising froma wheelchair. Bandages covered gunshot wounds to her leg.

“I love you, El Paso,” she said, her voice cracking. “This is where I’m going to stay.”

Former US Rep. Beto O’Rourke, who is seeking the Democratic presidential nomination, also attended and spoke to the crowed. O’Rourke has blamed President Donald Trump’s rhetoric for spreading fear and hate, leading Trump to tweet that O’Rourke should “be quiet.”