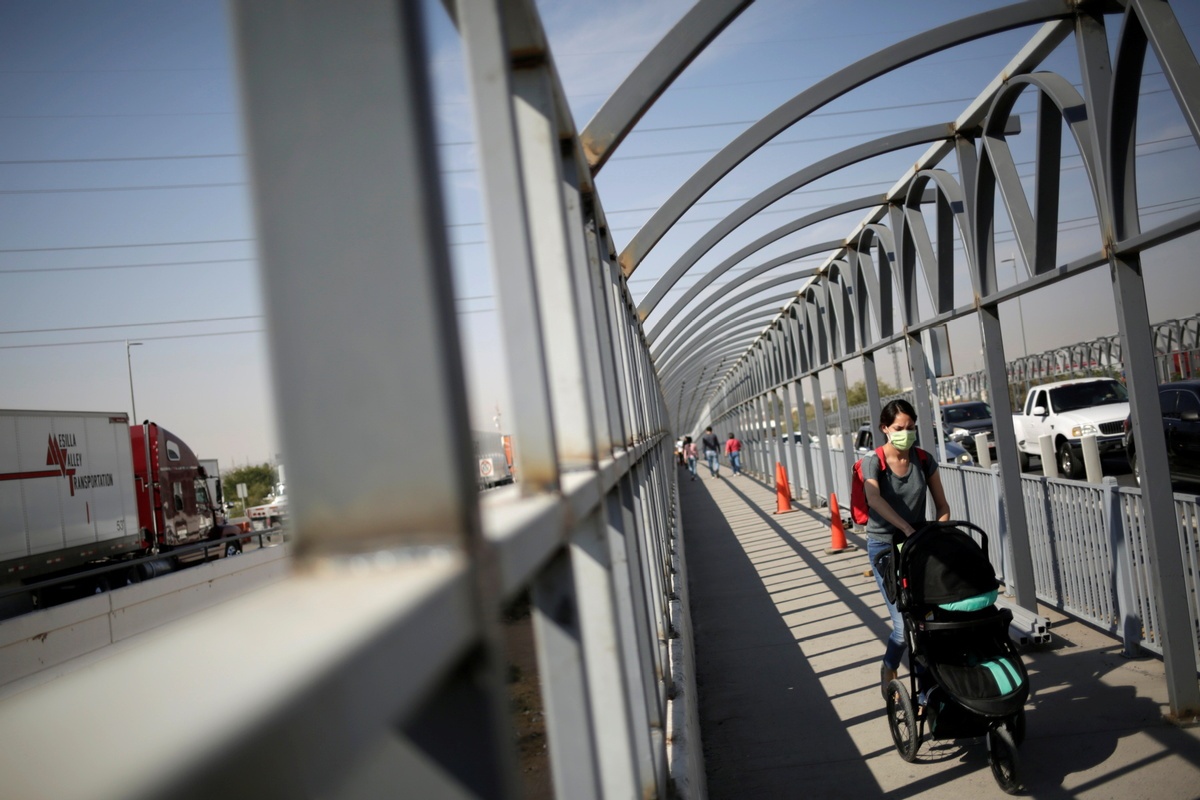 A woman walks across the Zaragoza-Ysleta border bridge crossing towards El Paso, Texas, US, as Mexico's Department of Foreign Relations requested another month-long extension on land-crossing restrictions at the US-Mexico border due to the coronavirus disease (COVID-19) outbreak, in Ciudad Juarez, Mexico October 19, 2020. (Photo: Agencies)

The Texas border city of El Paso has been hit with such a high number of novel coronavirus cases that a county judge has issued a two-week stay-at-home order with a daily curfew and a face-mask mandate.

Judge Ricardo Samaniego, the top elected executive in El Paso, issued the orders Sunday night, which include a 10 pm-5 am curfew. He said that the county has seen a 160 percent increase in the positive testing rate since Oct 1 and a 300 percent increase in hospitalizations.

The El Paso situation is occurring as novel coronavirus case numbers in the US have reached records in recent days with outbreaks continuing to grow across the country, especially in the Midwest and West areas.

On Monday, Illinois health officials reintroduced restrictions to mitigate the spread, including curfews and banning indoor restaurant service in some areas.

Daily numbers of COVID-19 deaths in the US are still lower than they were in the spring, but at least 339 new coronavirus deaths and 59,691 new cases were reported on Oct 25. There has been an average of 69,814 cases per day in the past week, an increase of 32 percent from the average two weeks earlier, according to data from Johns Hopkins University.

The soaring number of virus cases and investor concern about economic stimulus negotiations led the Dow Jones Industrial Average to fall 650 points, or 2.3 percent, to 27,686, erasing its gains for the month. The S&P 500 index dropped nearly 1.9 percent to 3,401, while the tech-heavy Nasdaq Composite index fell 1.6 percent, to 11,359.

In El Paso, Samaniego said funeral homes are preparing for a surge and El Paso County is "executing agreements for more morgue space".

He said the city is in a crisis stage because local hospitals are stretched to capacity. The Texas Department of Emergency Management is converting the city's convention center into an auxiliary hospital for about 100 beds. The state is sending three or four mobile hospital units, which will be set up in parking lots.

Governor Greg Abbott, a Republican, said Sunday that he also has asked the federal government to make the military hospital at Fort Bliss available for civilian patients.

According to the city's health department, there were 1,443 new coronavirus cases on Monday plus 118 delayed results. That brought the number of active cases to 12,179, the most since March. The total death toll from COVID-19 reached 576 on Monday.

As of Monday, hospitalizations in the city of 950,00 increased to 853, a record. About 180 of those patients are in intensive care units, according to health officials.

El Paso City Health Advisor Dr Hector Ocaranza said, "It's imperative that everybody avoid the opportunity to have the virus spread even further within our family and community."

Samaniego said the county hopes to have the situation under control by limiting mobility in the community.

Violators of the face mask order will be fined $250 and curfew violators $500.

Statewide, at least 44 new COVID-19 deaths and 3,935 new cases were reported on Sunday. Over the past week, there has been an average of 5,864 new cases a day, an increase of 37 percent from the daily average two weeks earlier, according to health officials.