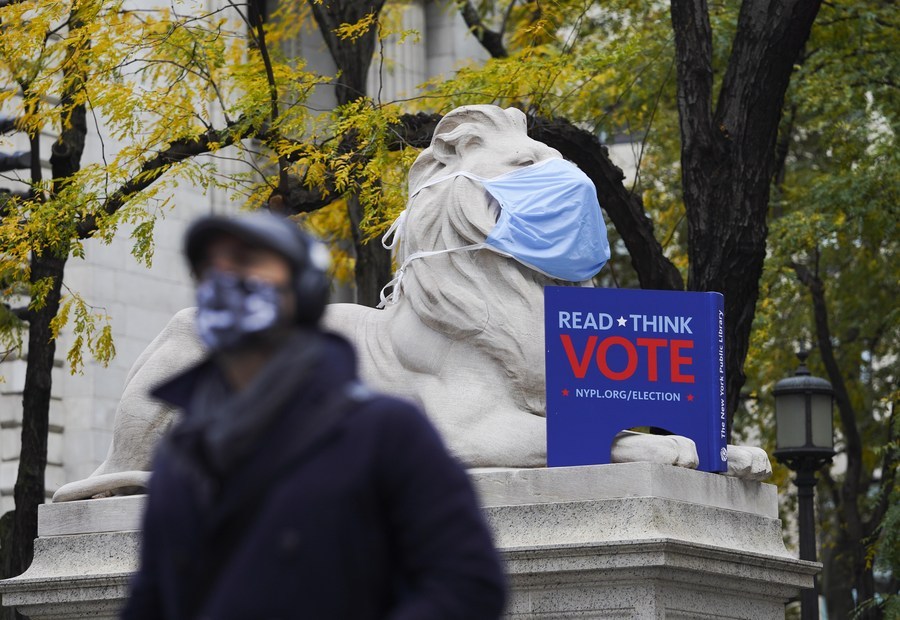 A pedestrian walks past an advertisement encouraging people to vote in the upcoming 2020 U.S. presidential election outside New York Public Library in New York, the United States, Nov. 2, 2020. (Photos: Xinhua)

Dozens of voters, maintaining social distancing and wearing masks, lined up in freezing wind before dawn on Tuesday outside a polling place in Arlington, Virginia, on the southwestern bank of the Potomac River across from Washington, D.C..

Inside, registration desks, with hand sanitizers and cleansing wipes on them, are at least several feet from one another. Voters are provided with single-use stationery, including pens. Poll workers frequently disinfect voting booths and machines between use.

Peter Giavotto, an Arlington resident, told Xinhua that the voting was quicker than he thought it would be and that he feels safer casting his ballot early in the morning than doing that later in the day.

In most states and Washington, D.C., polls opened early on Tuesday morning and will close in the evening. Voters in two tiny towns in the northeastern state of New Hampshire cast the country's first ballots on Election Day after the clock struck midnight.

Over 100 million people already voted this year before Election Day, including more than 35 million early in-person votes and more than 64 million returned mail-in ballots, shattering previous records for early voting, according to a tally from the U.S. Elections Project. 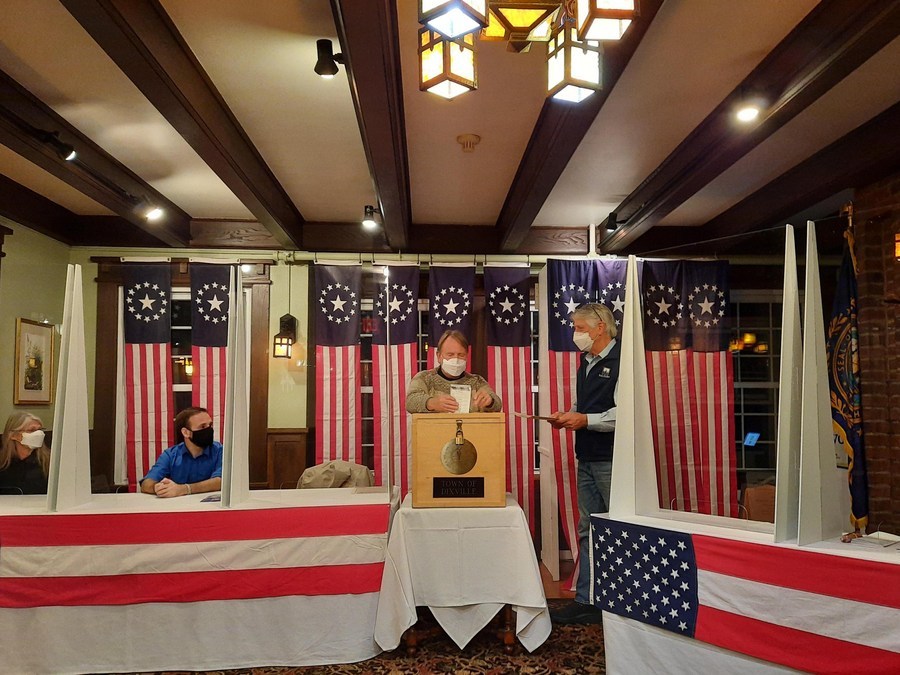 States have different rules on when they are allowed to actually start counting mail-in ballots, which generally require more time to process than those cast in person. Election officials and experts have said that the country should be prepared not to know who won the White House on Election Night.

Giavotto said he has confidence in the integrity of mail-in ballots, which many states have expanded during the pandemic in order to help people to vote more safely, despite partisan tussle over the issue. But he also acknowledged that he prefers to vote in person because he likes knowing his vote was counted on Election Day.

Meanwhile, all 435 seats in the U.S. House of Representatives and 35 of the 100 seats in the U.S. Senate will be in play on Tuesday. More than a dozen state and territorial governorships, among many other state and local posts, will also be contested.

John Peterson, who works for a tech company, told Xinhua in Arlington that he supports Biden for president because he thinks the United States "is very divided right now, and we need to restore civility to our political processes." Giavotto made a similar point, saying that he believes the Americans are more divided, a situation that is hurting the country.

Trump's base remains strong, despite broad criticism about his handling of a number of issues, including the pandemic, which has infected over 9.3 million people and killed more than 231,000 in the United States, and race relations, which have come under national attention following the death of African American George Floyd in police custody in Minneapolis, Minnesota, and massive demonstrations afterwards.

Speaking to Xinhua in a phone interview after voting on Tuesday, Tom Waters, a soybean and corn farmer in Orrick, Missouri, said that he voted again for Trump, adding that economy is among his top concerns and that he supports tax cuts.

Allen Barber II, a Republican voter from Colorado, told Xinhua, also by phone, on Election Eve that he also supports Trump, particularly giving nod to the president's domestic policies, including deregulation. "They seem to be fairly successful," he said. "Plus, he has gotten rid of a bunch of regulations that were slowing everything down that were probably not necessary." 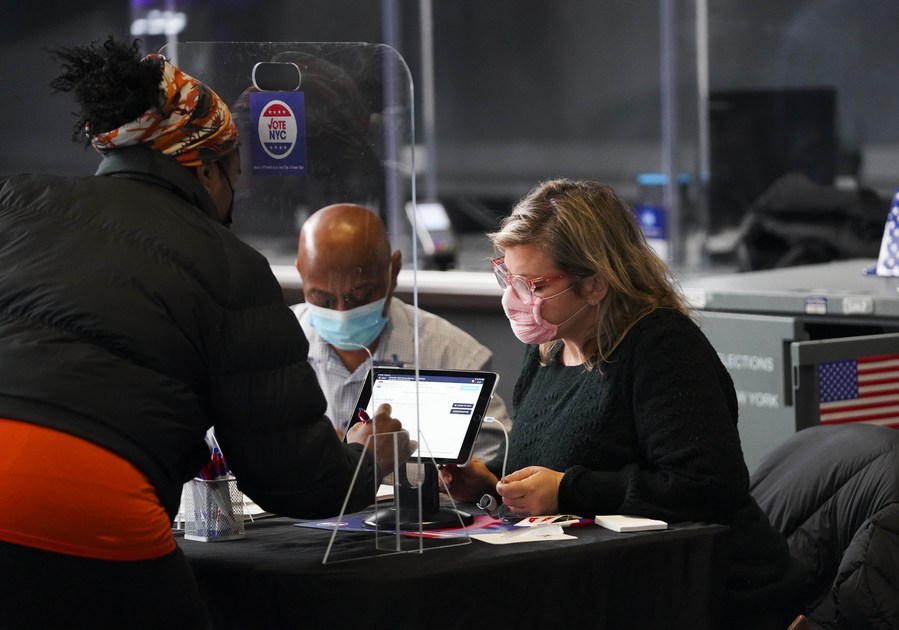 A voter checks in at a polling station in New York, the United States, Nov. 3, 2020. Voters in major cities along the east coast of the United States started to cast their ballots early Tuesday, as polls continue to open across the country to decide the presidency.

The Trump-Biden race could come down to Pennsylvania, where Trump stunned then Democratic nominee Hillary Clinton by less than 1 percentage point four years ago, according to Nate Silver, founder and editor-in-chief of FiveThirtyEight, a U.S. website focusing on opinion poll analysis and politics.

This year, both candidates have visited the "Keystone State" more than any other battlegrounds during campaigns.

Trump will stay at the White House after visiting the Republican National Convention annex in Arlington on Tuesday noon after a 10-rally sprint to the finish in just two days. During a morning interview with "Fox&Friends," Trump said he has "a very solid chance of winning" and touted the size of crowds attending his rallies.

Biden returned to his hometown of Scranton, Pennsylvania, on Tuesday morning to make last-ditch efforts to court voters. In a series of tweets, Biden criticized Trump's presidency and vowed to "heal the soul of this nation" if elected.