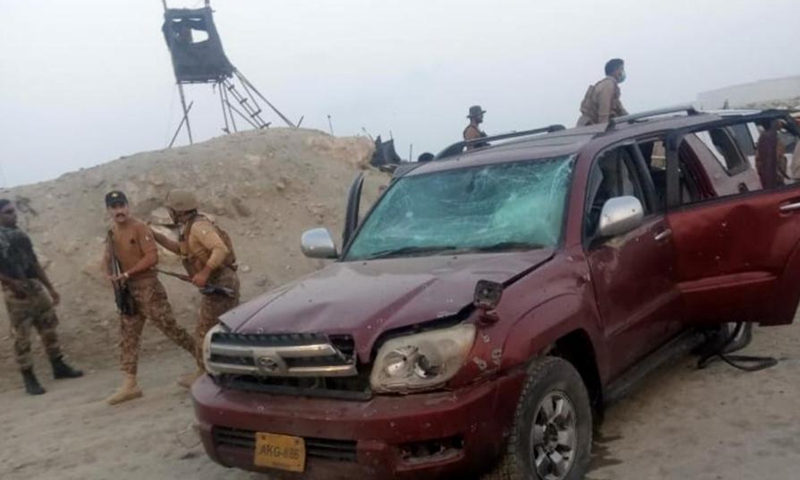 A damaged vehicle is seen at the blast site in Gwadar district of Pakistan's southwest Balochistan province on Aug. 20, 2021. Two children were killed and three others including a Chinese national were injured in the suicide attack, a Pakistani government official said. (Photo: Xinhua)

The embassy asked Pakistan to upgrade its safety measures to ensure such incidents won't happen again.

This comes only a month after nine Chinese nationals were killed when a bus carrying Chinese engineers and workers to the site of the Dasu Dam was attacked in the restive Khyber Pakhtunkhwa province.

On Friday, at the Gwadar East Bay Expressway project in Balochistan, Pakistan, a motorcade carrying Chinese workers was attacked by a suicide bomber. One Chinese was injured, two local children were killed and several others were injured. After the incident, the Pakistani side sent the wounded to the hospital in Gwadar for treatment, according to the Chinese embassy.

The Chinese Embassy in Pakistan strongly condemns the act of terrorism, and demands Pakistan to properly treat the wounded, conduct a thorough investigation on the attack, and severely punish the perpetrators, a statement from the embassy said.

In 2018, the group also attacked the Chinese Consulate-General in Karachi in south Pakistan, during which two policemen were killed.

"A young boy suddenly ran out as the convoy driving Chinese workers reached there. Fortunately, Pakistan army soldiers in plain clothes employed nearly rushed to snatch the boy, who immediately exploded himself about 15-20 meters away from the convoy," Pakistan Today quoted an official from the Ministry of Interior as saying.

The Chinese embassy said on Saturday that relevant departments at all levels in Pakistan must take practical and effective measures to implement strengthened whole-process security measures and upgrade security cooperation mechanism to ensure that similar incidents will not happen again.

"Attack in Gwadar is just another expression of a game of sabotage against the economic vision of the great leadership of China and Pakistan, our enemy cannot undermine our resolve, we will spare no effort to bring the culprits to justice," Fawad Hussain Chaudhry, Federal Minister for Information and Broadcasting of Pakistan, said on Twitter on Saturday.

The Gwadar Eastbay Expressway Project, a China-aide project, started construction in November 2017, and it is a highlight of the China Pakistan Economic Corridor framework.