An employee opened fire Wednesday at a California rail yard, killing eight people before taking his own life as law enforcement rushed in, authorities said, marking the latest attack in a year that has seen a sharp increase in mass killings as the nation emerges from coronavirus restrictions. 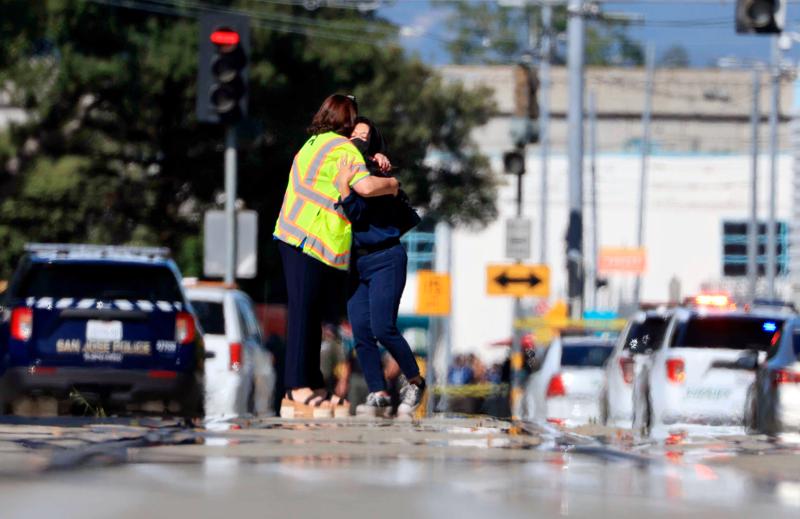 Two people hug on Younger Avenue outside the scene of a shooting in San Jose, Calif., on Wednesday, May, 26. 2021. (Photo: Agencies)

The shooting took place around 6:30 a.m. in two buildings that are part of a light rail facility for the Valley Transportation Authority, which provides bus, light rail and other transit services throughout Santa Clara County, the most populated county in the San Francisco Bay Area. The facility includes a transit-control center, parking for trains and a maintenance yard.

“When our deputies went through the door, initially he was still firing rounds. When our deputy saw him, he took his life,” Santa Clara County Sheriff Laurie Smith told reporters. Deputies “were going through hallways saying, ‘Sheriff’s office!’ He knew at that time that his time for firing shots was over.”

A man who was wounded is in critical condition at Santa Clara Valley Medical Center, according to spokesperson Joy Alexiou.

The attacker was identified as 57-year-old Sam Cassidy, according to two law enforcement officials. Investigators offered no immediate word on a possible motive.

Sheriff’s spokesman Deputy Russell Davis said he did not know the type of weapon used in the attack. Bomb squads were searching the entire rail complex after receiving information about possible explosive devices, he said.

Authorities did not identify any of the victims, who included Valley Transportation Authority employees.