WORLD Energy of Asia, peace for world at Jakarta Asiad

Energy of Asia, peace for world at Jakarta Asiad

AKARTA, Sept. 2 (Xinhua) -- The 18th Asian Games in Jakarta came to a close when the cauldron extinguished at the Gelora Bung Karno Main Stadium on Sunday, but the Games will be long remembered for showcasing the energy of Asia, the drive for world peace and host Indonesia's passion. 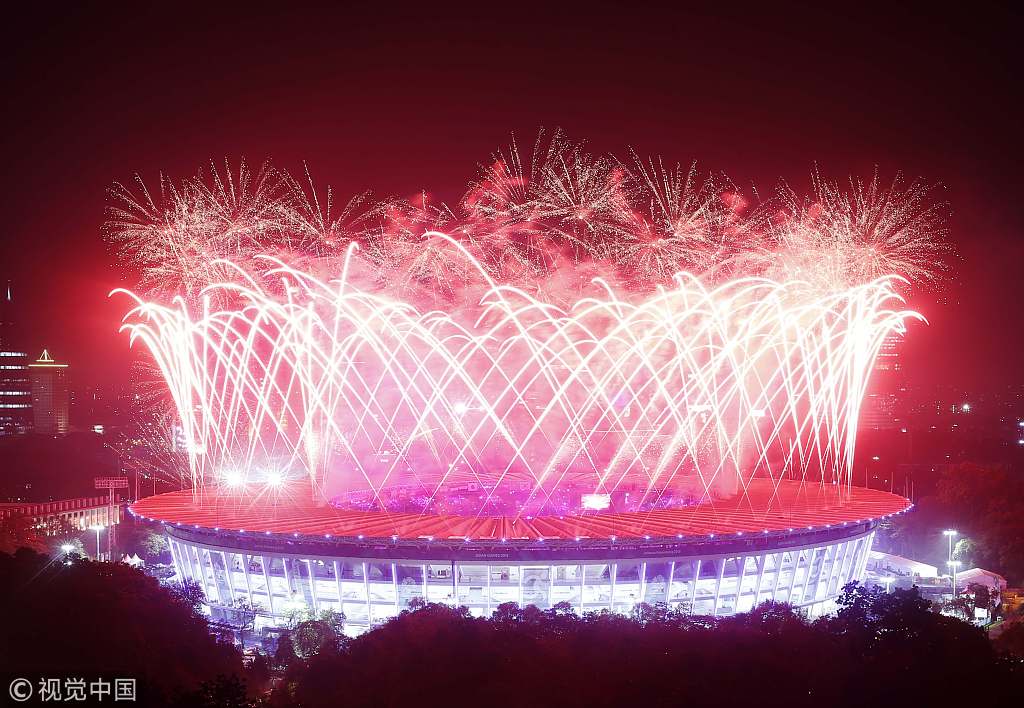 Liu's time of 26.98 seconds made her the first woman breaking into the 27-second mark in the event.

A total of 18 Asian records have also been set up at the Games.

China once again called the shots at the Games, leading with 132 gold, 92 silver and 65 bronze medals, although the Asian giant sent a relatively young delegation, with 631 out of their 845-athlete squad having participated in neither the Olympics nor the Asian Games.

"The Asian Games can serve as a mid-term exam for us in build-up to the Tokyo Olympics," Chinese delegation general secretary Liu Guoyong said during the Games. "The Games could let them have a feel for major international sporting events."

Japan achieved better-than-expected results at the Asiad as they wrapped up the campaign with a total of 205 medals, including 75 golds, 56 silvers, and 74 bronzes, overtaking South Korea to finish second in the tally for the first time in a decade.

Japan delegation chief Yasuhiro Yamashita acknowledged that it would still not be easy to meet Japan's target of 30 gold medals at the 2020 Olympics.

"We will not be satisfied with the achievements (at the Asiad), but will make more efforts to connect this to the Tokyo Olympics," he said.

China, Japan and South Korea (49 golds) dominated, as always. But several other teams closed ground on the Big Three.

The Big Three were followed in the gold-medal ranking order by: Indonesia (31), Uzbekistan (21), Iran (20) and Chinese Taipei (17). India and Kazakhstan each had 15 followed by the Democratic People's Republic of Korea (DPR Korea) and Bahrain with 12.

In a latest move to thaw the relations on the troubled Korean peninsula, DPR Korea and South Korea formed a unified team to participate in three sports of the Games, a feat which Olympic Council of Asia (OCA) President Sheikh Ahmad Al-Fahad Al-Sabah cited as an example as the strong role of sports in promoting world peace and global unity.

The unified team won four medals overall, including a historic gold in dragon boat racing, which was the first gold medal by a unified Korean team at a major multi-sport event.

Six months ago, a unified women's hockey Korean team played at the PyeongChang Winter Olympics, but they failed to earn a medal.

In the opening ceremony, DPR Korea and South Korea marched together under a unified Korean flag, just like that during the PyeongChang Winter Olympics.

The host Indonesia also made headlines this time.

Fifty-six years after hosting the Asian Games for the first time, Indonesia welcomed guests from across Asia again.

It's a huge undertaking by Indonesia, especially when Jakarta and co-host city Palembang were awarded the Games only four years ago after Vietnam withdrew in 2014 due to financial constraints. This allowed for only four years of preparation, instead of the usual six to seven years.

Although Jakarta had to organize the event in a short time, on a tight budget, the capital city has proved that it can host a multi-sports international event involving 45 teams that represent more than 4 billion people in a record time of just four years.

"Indonesia has done a good job in preparing the organization of the 2018 Asian Games," said OCA President Sheikh Ahmad, adding that there were minor problems, but no complaints or protests during the games.

Jakarta did a marvelous job in preparing the venues, recruiting 15,000 volunteers and building two fantastic athletes' villages in Jakarta and Palembang, on top of organizing the games itself. The opening ceremony, closing ceremony and athletics competitions were perfectly held in the newly renovated Gelora Bung Karno Main Stadium.

The organisers addressed a number of key concerns, including security issues, haze resulting from forest fires around Sumatra as well as motor vehicle and industrial emissions in Jakarta.

Jakarta used to be a notorious city of traffic congestion. To ease the problem, the government introduced an odd and even policy for vehicles in Jakarta.

In terms of athletic achievements, Indonesia also entertained the home fans by winning 31 gold, 24 silver and 43 bronze medals to sit fourth on the medal table, only after the Big Three.

Also in a surprise announcement on Saturday, Indonesian President Joko Widodo said Indonesia will bid to host the 2032 Olympics following the success of the Asian Games, highlighting the rising ambition of the giant but long underperforming Southeast Asian nation.

"With the experiences we have had in organizing the 18th Asian Games, we believe Indonesia can also host an even bigger event," Widodo said.