JAKARTA, Nov. 2 (Xinhua) - Divers on Friday discovered a turbine, or turbo jet engine, and the tail of the Lion Air plane that crashed into the sea off western Indonesia while a landing gear was lifted from the seabed. 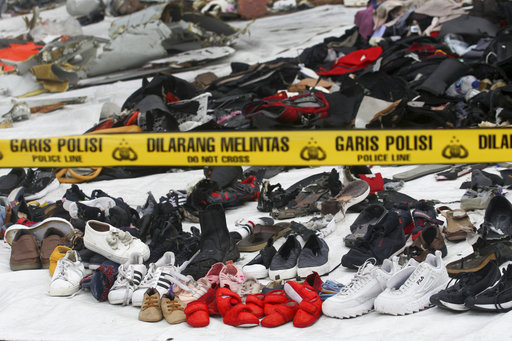 Shoes and debris retrieved from the waters near where a Lion Air jet is believed to have crashed are laid out for investigation at Tanjung Priok Port in Jakarta, Indonesia, Friday, Nov. 2, 2018. (Photo: AP)

However, the turbine has not been salvaged from the sea off West Java province.

The TV footage also displayed that another diver was removing the tail of the plane with a logo of "Lion" on it, while a landing gear, which was found a day earlier, was also winched by a crane to the surface.

President Joko Widodo visited the joint command post, giving support to a total of 859 personnel engaging in the search mission.

"For those at the crash site, keep working hard to find what have not been discovered. For the transport safety committee I ask for working quickly to investigate the cause of the incident," said Widodo.

The Boeing 737 jet enroute to the city of Pangkal Pinang with 189 people aboard was reported missing Monday morning, and was believed to have crashed 13 minutes after taking off from Jakarta's Soekarno-Hatta international airport.

It is believed that all 189 people on board the plane have been killed.

The search operation for another black box and fuselage of the flight JT 610 was being carried out about 500 meters northwest of the location where the pilot of the aircraft last communicated with the air traffic control.