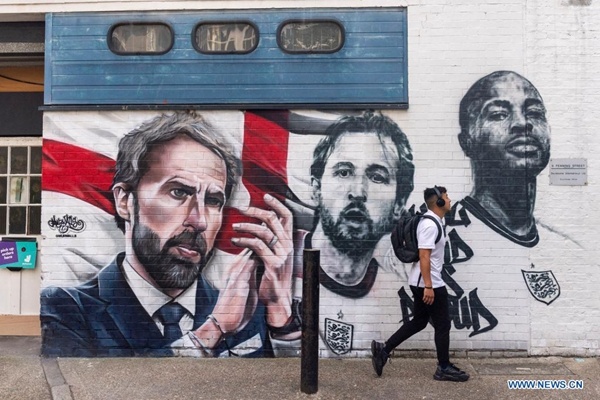 England has lifted almost all its remaining COVID-19 restrictions on Monday, according to its roadmap out of lockdown.

As the number of daily infections continues to rapidly increase, the final stage of easing coronavirus restrictions came with a note of caution.

This Monday is being described by the British government as Freedom Day, where almost all legal restrictions on social contact have been removed.

The detailed arrangement of the final step out of lockdown includes: no more limits on social contact to allow people to gather in groups of any size; removing the "one meter-plus" rule in almost all settings, except for specific places such as airports; no capacity caps on large scale events; and people are no longer required to work from home, among other changes. Face coverings will be recommended in some spaces, but not required by law.

The government said the removal of restrictions is the right step, despite the rising number of infections in much of the country.

Recent swab tests show that one in every 95 people has the virus in England, up from one in every 160 from the previous week, and the more infectious Delta variant accounts for almost every case.

Reactions by members of the public towards Freedom Day are mixed. Some say the virus has more "freedom" than the public, but others look forward to a life resembling normalcy.

Eduarda Masotti de Oliveira told Xinhua at a shopping center in London that she has long awaited this day, "but at the same time I think we have to do the jabs to get protected."

All adults in the UK have been offered a COVID-19 vaccine ahead of the planned lifting of restrictions on Monday, the government said.

The latest figures showed that 46.2 million adults, or 87.8 percent of the population, have had a first dose of a vaccine, and 35.7 million are fully vaccinated.

Still, medical experts were reminding the public to exercise caution.

Stephen Winchester, consultant virologist at Berkshire and Surrey Pathology Services, believes that vaccines are key in allowing England to have its Freedom Day, but as restrictions are eased it is imperative that the government continue to urge the public to remain cautious and exercise sound judgement.

"You need to be careful, use your own judgement and use the mask sensibly. And then beyond the mask, it's just general common sense in terms of isolating if you have symptoms, getting tested, not going out, avoiding contact with anyone who is symptomatic where possible," he said.

He added that a further rise in cases is a risk, but if the public remains aware of new cases, hospitalizations and deaths, "then it should help to mitigate the spread."

"Threat to the world"

Hours ahead of England's Freedom Day, Imperial College London epidemiologist Neil Ferguson warned that the current wave of coronavirus infections in Britain could see up to 200,000 new cases a day. He told the BBC that it was "almost inevitable" that daily infection rates would hit a record 100,000 within a week after the lifting of restrictions.

The UK government's decision to lift virtually all of England's pandemic restrictions was also criticised by international experts as "a threat to the world."

More than 1,200 scientists have backed a letter in the journal The Lancet last week, saying that the UK's plan to lift most coronavirus restrictions in England is an "unethical experiment," which poses a serious threat to the rest of the world.

The letter argued that lifting restrictions at a time when infection rates are rising could increase the chance of new vaccine-resistant coronavirus variants emerging.

"Because of our position as a global travel hub, any variant that becomes dominant in the UK will likely spread to the rest of the globe," Christina Pagel at University College London said during an emergency summit of scientists and doctors on July 16.

Government advisers in New Zealand, Israel and Italy were among those who sounded alarm bells about the policy. Professor Jose Martin-Moreno of the University of Valencia, a senior adviser to the World Health Organization, said at the emergency summit: "We cannot understand why this is happening in spite of the scientific knowledge that you have."

Others warned the UK's approach would be imitated, for political expediency, by authorities elsewhere.

According to the latest data from the European Centre for Disease Prevention and Control, new virus cases are rising in 20 European countries, including Spain, Portugal, the Netherlands and Greece, with Delta spreading throughout the region. However, several European countries also plan on relaxing restrictions and opening borders in anticipation of increased tourism, summer vacations and related events.

"COVID is still troubling and dangerous," the WHO warned in a recent analysis of the global situation.

For Stephen Winchester, consultant virologist at Berkshire and Surrey Pathology Services, the threat of new variants will "always be there," even with restrictions. What is key, he believes, is that Britain continues with its strong vaccination program and testing structure.