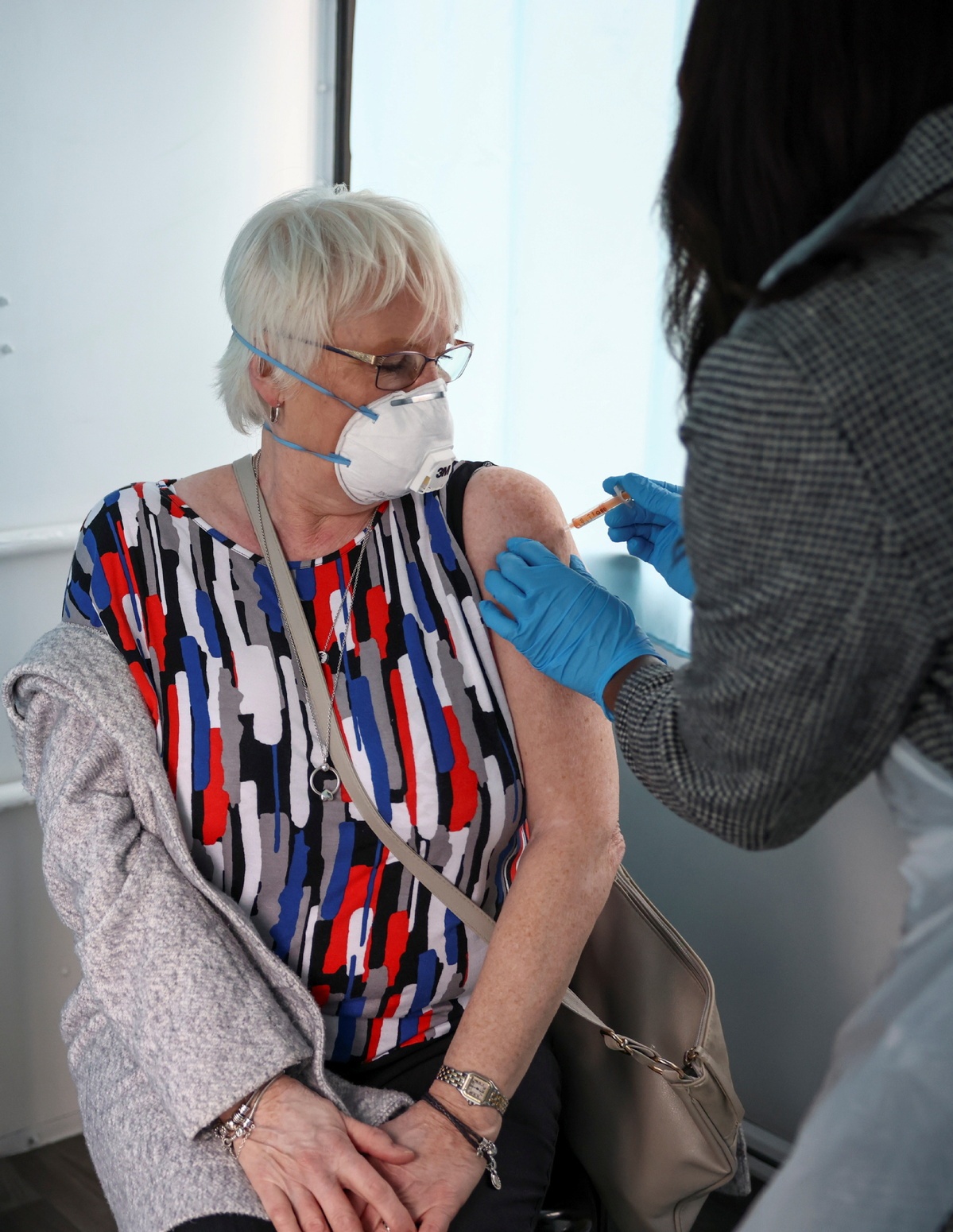 A woman receives a dose of the Oxford-AstraZeneca COVID-19 vaccine inside a bus modified into a mobile vaccination centre for the coronavirus disease (COVID-19), in Thamesmead, London, Britain, Feb 14, 2021. (Photo: Agencies)

The next step of England's novel coronavirus vaccination program is due to start on Monday with invitations being sent out to people aged 65 to 69 and the clinically vulnerable, as it expands beyond the initial priority groups.

More than 1 million letters should have been sent out to potential new recipients by Saturday, inviting them to book an appointment online for a jab at one of more than 100 vaccination centers, or 200 pharmacies, with a similar number of letters to be sent early this week.

The clinically vulnerable group includes those suffering from conditions including severe asthma and chronic respiratory problems. Because of the likely close existing relationship between such people and their local doctor, they will be dealt with at GP-led vaccination sites.

"This is an exciting moment as we now move on to those aged 65 and over and the clinically vulnerable as part of our plan to vaccinate as many people as possible who can benefit from it," said Simon Stevens, chief executive of the National Health Service. "However, if you have already been offered a jab but have not taken it up, it is not too late. Please come forward and help us to help."

It is now being reported that more than 14.5 million people in the United Kingdom as a whole have received at least one dose of vaccine so far.

Vaccination in other parts of the UK is also making good progress. In Wales, some over 50s are now being contacted, and with the majority of older people in Scotland having received the vaccine, First Minister Nicola Sturgeon says she expects many in the 65 to 69 bracket to receive their first jab by the middle of this month. In Northern Ireland, everyone older than 65 should receive a dose by the end of February.

However, despite the continued rollout of the program, and the decline in hospital admissions and fatalities, Foreign Secretary Dominic Raab said the government will not bow to the demands of a group of backbench Conservative Party members of Parliament who want to see all COVID-19 restrictions lifted by the end of April, once priority groups have been vaccinated.

"We do need to be very careful how we proceed. We have made good progress. We don't want to see that unravel because we go too far too quick," he said. "We are not making what feels to me like a slightly arbitrary commitment without reviewing the impact that measures have had on the transmission and the hospital admissions of the virus. I don't think you can set though an arbitrary target and not be evidence-led, which is why the review point on Feb 22 is so important."

That date is when Prime Minister Boris Johnson is due to announce his so-called roadmap out of national lockdown, which is expected to begin with the reopening of schools on March 8, although it was reported in the Sunday Telegraph that secondary school pupils may have to wait a further week.

It has also been hinted that restrictions on outdoor recreation could be among the first to be lifted, amid increasing concern about the damage being done to physical and mental health.

In contrast to the success of the vaccine rollout program, however, the UK's plans for quarantine hotels to try and control the spread of novel coronavirus variants have been heavily criticized by a leading trades union.

Nadine Houghton of the GMB union told the Observer newspaper that, despite repeated warnings from its members, the government-designated accommodation for new arrivals from so-called "red-list" countries of high concern over the risk of infection was not safe.

"If you've got people getting off planes from the red-list countries, then being crammed into areas with passengers who aren't going into quarantine – and staff as well – you've failed at the first hurdle," she said. "Our members working at Heathrow Airport, the ground staff, security staff, have been raising concerns about this for two weeks now. Heathrow just isn't safe at the moment. We're talking about the spread of new strains, so people entering from different countries into a small space is not a good look."

One leading hotel chain boss even went as far as to suggest the quarantine hotels could become spreading hubs, as their windows do not open and they rely on central air conditioning.

"The risk is exactly what has happened in Australia. The quarantine hotels are becoming a bit of a hub where the virus is spreading," Meher Nawab, chief executive of the London Hotel Group, told the Daily Telegraph.