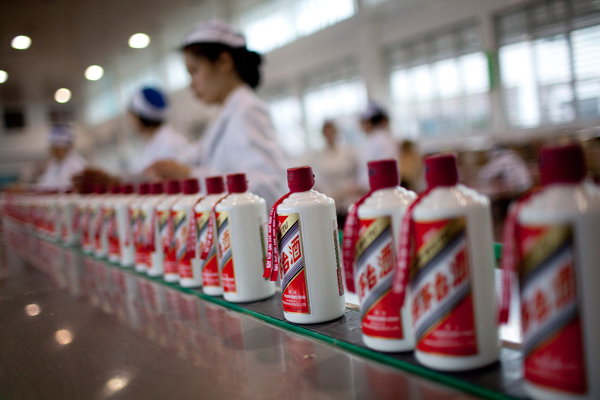 A farmer in the English county of Essex has come up with an imaginative way to celebrate Chinese New Year－by launching his own version of the nation's favorite spirit, baijiu.

Pete Thompson is a vegetable farmer and much of his produce is for the Chinese market, hence his awareness of and interest in baijiu, a spirit which is familiar to Chinese communities around the world but not hugely well-known beyond that.

He has previously brewed his own apple brandy using fruit that would otherwise have been discarded, and has now teamed up with local brewery the English Spirit Distillery to make a drink out of 100 percent British-sourced sorghum grains.

They were fermented in a way close to the traditional Chinese method before the final distillation process was carried out at the Essex plant, for a product that is 50 percent proof.

It will retail at 45 pounds ($58) per bottle and is currently available direct from the distillery website, with negotiations ongoing for other retail opportunities.

Thompson's brew is described as having a "malty and umami flavor" and can be drunk on its own or as an ingredient in cocktails.

"We've created Thompson's Baijiu to honor Chinese tradition and British science and distilling expertise," he said. "We marry innovation in growing crops for flavor and desire to create a holistic farming system, with the experience and wisdom of our partners the English Spirit Distillery to create exceptionally delicious spirits."

The new brew is just one of an increasing number of products being made out of produce that would otherwise be discarded.

In 2018, Scottish distillery William Grant and Sons' created a new type of vermouth flavored with coffee, and late last year they added banana peel rum to their product range.

"We've always tried to work holistically. But recently, we've been looking at people who are doing all sorts of interesting things with preserves and fermentation－really, you can do something with everything," Thompson told drinks industry website Harpers.co.uk.

"With spring onions and cabbage, we could be making kimchi. And now there's the baijiu which we're making out of our sorghum, as most of our core farming business goes to UK restaurants and Chinese supermarkets."

The ushering in of the Year of the Rat at the end of the month will be celebrated widely across the United Kingdom. The annual event held in London's Trafalgar Square is now recognized as being the biggest celebration of Chinese New Year anywhere outside Asia.