WORLD English pubs are reopening — they won't be the same

English pubs are reopening — they won't be the same 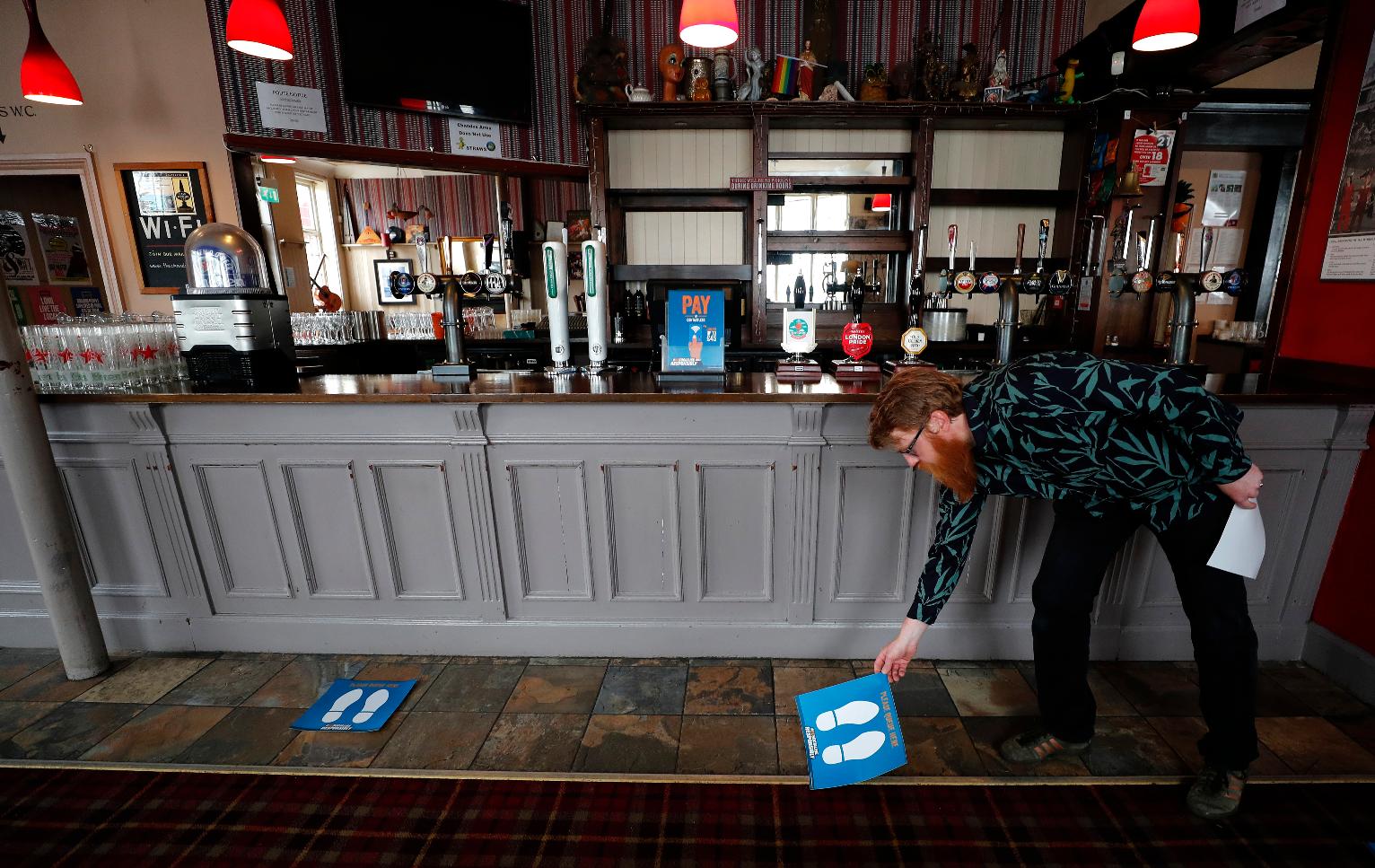 Owner Are Kjetil Kolltveit from Norway places markers for social distancing on the front of the bar at the Chandos Arms pub in London, Wednesday, July 1, 2020. (Photo: AP)

Asking people in English pubs to keep their distance is going to be tough after they’ve had a few of their favorite tipples.

Pub managers will have to be resourceful come Saturday when they and other parts of the hospitality industry in England open their doors to customers for the first time since March 20, provided they meet COVID safety requirements.

The British government has been accused of being reckless in allowing pubs to open again, given coronavirus infection and death rates are still high and amid evidence that reopening bars in countries like the U.S. has led to new outbreaks. The U.K. has recorded nearly 44,000 virus-related deaths, third behind the United States and Brazil.

Many cash-starved pubs will take the plunge anyway, though they will be very different from what they were when they shut down given the need to ensure everyone is safe — from registering customers upon entrance to making sure tables are far enough apart to meet social distancing rules.

“I’m nervous,” said Are Kolltveit, who runs the Chandos Arms in north London with his wife Emily. They have turned around the fortunes of the pub in the past few years by taking it back to the community, offering activities like live music — in addition to a finely poured pint of ale. It was voted Best Local in the 2019 British Pub Awards.

“It won’t be the same, but we’ll do our best to make it just as great as ever,” he said.

The pandemic is an existential threat to most of England’s 37,500 pubs. The Chandos, and countless others, have benefited from government measures, notably a wage support scheme that prevented mass firings. Around 90% of pub staff were furloughed under the scheme, according to the Beer and Pub Association.

Reopening offers hope to publicans like Kolltveit, but margins are tight.

Kolltveit wants to think people will abide by the rules, given the pandemic is still ongoing, and says his pub can survive for around five months without further help — provided it runs at 50% of maximum capacity and there’s no second spike in contagions or a new lockdown on businesses.

“The best pubs are extensions of the landlord’s personality and the atmosphere of the pub is going to be massively challenged, but I think the best publicans will find ways of reinventing it in some way,” said Pete Brown, an award-winning beer writer.

When they reopen, pubs will need to ensure table service, a move that halts the cherished tradition of the English boozer — crowding and chatting around the bar. Guests will be limited to groups of six and, where possible, sit side by side to reduce any risk of contagion that may come from shouting too loudly.

They will be spaced at least one meter (3.3 feet) apart and be encouraged to take other measures to keep themselves safe, such as using hand sanitizers. The wearing of masks, even by staff, is optional.

Pub staff will also have to register the names of customers at the door — and keep them for 21 days — to assist in any efforts to trace virus contagions.

Tim Sheehan, co-owner of Franklins, a pub and restaurant in southeast London, is annoyed by the effective enrolment of the hospitality industry in the effort to track and trace contagions and wonders how he is meant to verify anyone’s health or identity.

“How many Mr. and Mrs. Presleys are we going to get? And how do you go about asking people personal questions?,” he said. “I’m dreading it in that respect.”

He’s also concerned it will be “like New Year’s Eve” in some pubs, particularly those that cater to younger people, and that social distancing guidelines “may go out of the window after people have had a few shandies.”

“We are moving to the stage where the advice is to essentially use common sense,” said Jon Cross, a 40-year-old accountant in north London.

“Most people will trust their local to make the right choices,” added Cross who said he’d happily frequent his local pub, The Wrestlers, if it isn’t busy.

The guidelines are the same whatever the size and layout of the pub. But the challenges are likely to be very different for a huge venue like JD Wetherspoon’s The Moon Under Water in Manchester and a quaint country pub like The George at Burpham, tucked between a church and a cricket pitch in southern England.

Pubs like The George are inherent to the rhythm of their rural surrounding. It is starting with an outside barbecue on Saturday, followed by a traditional Sunday roast service indoors and out.

“Not since the Duke of Norfolk opened Arundel Railway Station on his land in August 1863 has a summer event been more eagerly awaited by Sussex locals than the re-opening of The George,” said Robert Essex, a 59-year-old marketing services executive and one of the locals who bought the pub in 2013.

Not everyone is reopening. The Tollington Arms, a pub near Arsenal’s soccer stadium in north London thinks the government is ignoring expert scientific advice and voiced worries about “contributing to a second wave of this pandemic.”

The next few weeks will judge the government’s decision but Brown thinks the pubs that responded to their community's needs during lockdown by showing an entrepreneurial spirit will thrive, or at least survive.

“I’ve seen that being reinvented during lockdown by pubs doing things like collecting prescriptions, or doing takeout deliveries.”