Enigmatic Beluga whale off Norway so tame people can pet it 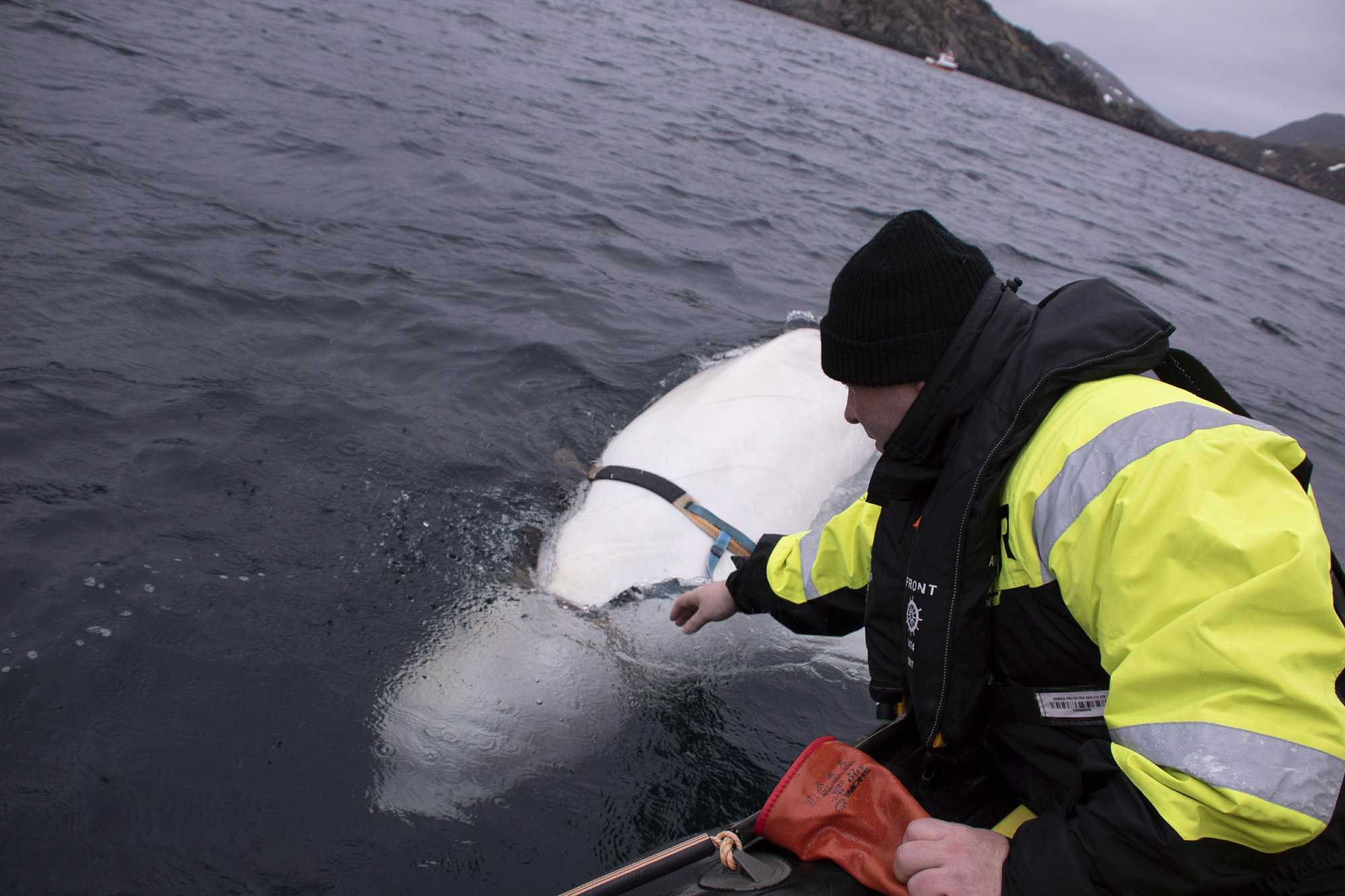 Joergen Ree Wiig tries to reach the harness attached to a beluga whale before Norwegian fishermen were able to remove the tight harness, off the northern Norwegian coast. April 26, 2019. (Photo: AP)

A beluga whale found in Arctic Norway wearing a harness that suggests links to a military facility in Russia is so tame that residents can pet the mammal on its nose.

The white whale found frolicking in the frigid harbor of Tufjord, a hamlet near Norway’s northernmost point, has become “a huge attraction” for locals, one resident said Tuesday. The whale is so comfortable with people that it swims to the dock and retrieves plastic rings thrown into the sea.

“The whale is so tame that when you call it, it comes to you,” said Linn Saether, adding the whale also reacts to yells and when humans splash their hands in the water.

She said when she throws out a plastic ring, the Beluga whale brings it back to her as she sits on the dock.

“It is a fantastic experience, but we also see it as a tragedy. We can see that it has been trained to bring back stuff that is thrown at sea,” Saether, 37, told The Associated Press.

The whale was found with a tight harness reading “Equipment St. Petersburg” in English. The hamlet has a dozen permanent residents and less than 100 people in the warmer season.

“The talk in this hamlet is that it could have escaped from a Russian military facility or even have swam from St. Petersburg, Florida, because of the English-language text,” Saether said.

It was not immediately known whether any of the dolphin and whale facilities in St. Petersburg, Florida, were missing a Beluga whale.

On Friday, a fisherman jumped into the frigid Arctic water to remove the harness, which has a mount for a camera, from the whale. It wasn’t clear why the strap was attached to the mammal.

Audun Rikardsen, a professor at the Department of Arctic and Marine Biology at the Arctic University of Norway in Tromsoe, northern Norway, said he believes “it is most likely that Russian Navy in Murmansk” was involved.

Murmansk is the headquarters for Russia’s Northern Fleet, the single most powerful fleet in the Russian navy. The city is located on the Kola Peninsula, in far northwestern Russia close to the Norwegian border.

Russian authorities did not immediately respond to requests for comment on the whale.

But Mikhail Barabanov, a Russian naval analyst at the Moscow-based Center for the Analysis of Strategies and Technologies think tank, downplayed any links to the Russian military.

“I think that these Norwegian idiots simply robbed certain Petersburg zoologists who were trying to track whales," Barabanov said.