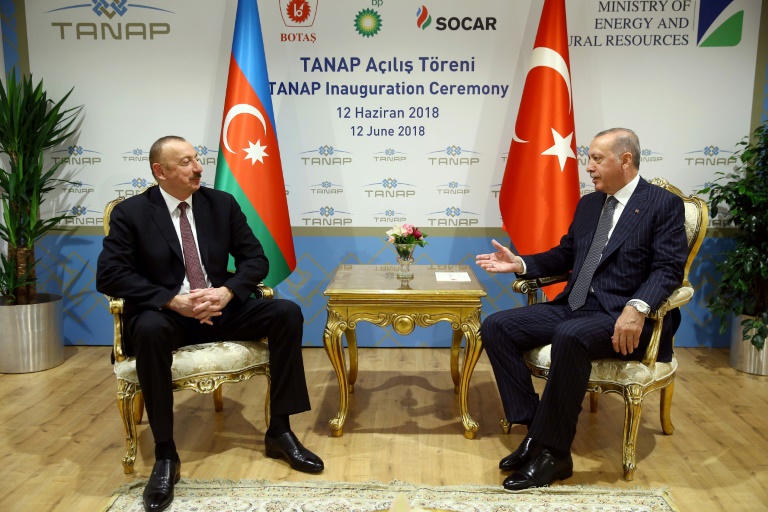 The pipeline is one of several mega projects showcased by Erdogan as he fights for re-election (Photo: AFP)

Turkish President Recep Tayyip Erdogan on Tuesday opened a new gas pipeline that will pump Caspian gas from energy-rich Azerbaijan across Anatolia to Europe for the first time.

The $8.5 billion Trans-Anatolian Natural Gas Pipeline (TANAP) is one of several mega projects being showcased by Erdogan as he heads to keenly-fought elections on June 24.

The TANAP pipeline connects with the South Caucasus Pipeline which pumps gas from the vast Azerbaijani Shah Deniz 2 field in the Caspian, via Azerbaijan and Georgia, to Turkey.

The pipeline is then to link to the west with the Trans Adriatic Pipeline (TAP) which will pump the gas through Greece and Albania to Italy.

Taken together, the entire project is known as the Southern Gas Corridor which is costing some $40 billion to build and was inaugurated in late May.

The system -- backed by the EU and United States -- will allow Azerbaijan for the first time to pump its gas direct to Europe while bypassing Russia.

Erdogan inaugurated the pipeline at a ceremony attended by leaders including Azerbaijan's President Ilham Aliyev, Ukrainian President Petro Poroshenko and Serbian President Aleksandar Vucic in the Turkish region of Eskisehir southeast of Istanbul, one of 20 provinces in Turkey the pipeline passes through.

"TANAP is the latest fruit of a shared vision," Erdogan said at the opening ceremony, describing the pipeline as part of a new "energy Silk Road".

The leaders then watched as the final section of the pipeline was lifted into place and then turned a wheel to allow the gas to flow.

The Turkish leader is battling a tightly fought contest for presidential and parliamentary elections, boasting at rallies nationwide of his ability to deliver on big projects.

During Erdogan's over 15 years in power, first as premier and then as president, Turkey has seen a massive revamp of infrastructure with new high speed rail lines, roads and the Bosphorus in Istanbul spanned by one new bridge and two undersea tunnels.

He is touting a daring new plan to build a Panama-style shipping canal in Istanbul as boasting that a brand new airport for the city is near complete.

But rights activists have slammed the Southern Gas Corridor projects, saying its Western backers are turning a blind eye to rights violations in Azerbaijan under the rule of Aliyev.