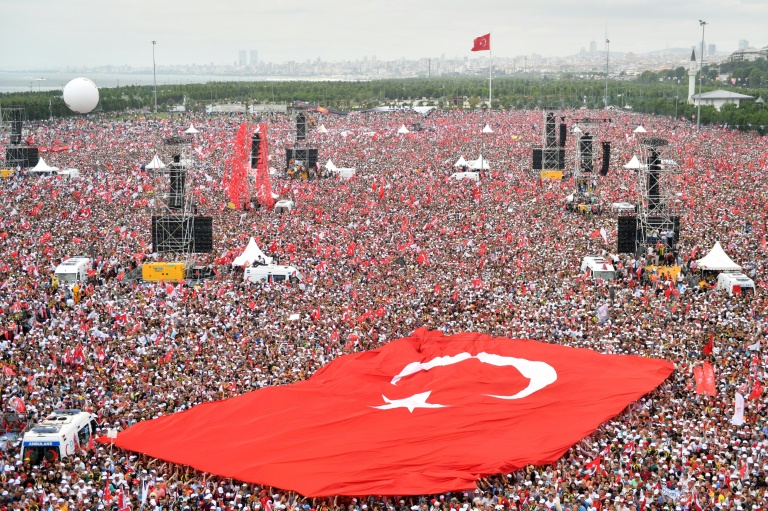 Hundreds of thousands of supporters of Turkish opposition presidential candidate Muharrem Ince joined an Istanbul rally on the eve of the vote.(Photo: AFP)

President Recep Tayyip Erdogan and his main rival Muharrem Ince on Saturday traded blows in mass rallies on the final day of campaigning for Turkey's most fiercely contested elections in years.

Turks vote on Sunday in snap twin presidential and parliamentary elections called by Erdogan one-and-a-half years ahead of schedule, with the president seeking a first-round victory for a new mandate and a strong parliamentary majority.

But the emergence of the energetic Ince as candidate for the Republican People's Party (CHP) and a wide-based opposition alliance have made the elections tighter than many analysts -- and likely Erdogan -- envisaged.

After mega meetings by Ince in Izmir and Ankara over the last two days, hundreds of thousands packed the vast Maltepe shoreside on the Asian side of Istanbul for his final rally.

Ince claimed that five million people had surged to the Istanbul event but it was not possible to immediately confirm the numbers.

He painted a bleak picture of Turkey if Erdogan wins the elections, saying its currency would remain weak, prices high and the issue of 3.5 million Syrian refugees unsolved.

"But if Ince wins, it will not just be Ince who wins... 80 million people will win! Turkey will win!" boomed Ince, who boasted of holding 107 rallies in the last 50 days.

He urged supporters to show "36 hours of mobilisation" for the voting and the count to ensure the elections proceed cleanly.

"Tomorrow, we will have a completely different Turkey. Tomorrow, discrimination will come to an end," said Ince, vowing a string of transformative measures from speeding up talks to join the EU to abolishing a hugely unpopular football fan ID card system.

There was a festive mood at his rally, with many participants travelling by ferry from the European side of Istanbul across the Sea of Marmara.

"We are supporting rights, law and justice. I'm supporting him (Ince) because he is natural, honest and humane," said supporter Cennet Sahin.

While Ince in the last days of campaigning opted to hold a single mass rally a day in Turkey's three major cities, Erdogan predicted victory at a sequence of smaller but well-attended rallies in Istanbul.

"Are we going to give them an Ottoman slap tomorrow?" Erdogan asked supporters, referring to an Ottoman technique for knocking out opponents.

"God willing, in a democratic way and within the limits of the law, we will teach them a lesson," added Erdogan, who after five Istanbul rallies Saturday ended his last speech just four minutes before the 1500 GMT deadline for legal campaigning.

He lashed out at Ince, who has vowed to camp outside the headquarters of Turkey's election commission Sunday to ensure a fair count. "Mr Muharrem, we are living in a state of law," he said, adding "all measures" had been taken for voting security.

He also sought to ridicule Ince, a former physics teacher who has never held state office despite being an MP for 16 years, for his lack of experience.

"It's one thing to be a physics teacher, it's another thing to run a country," said Erdogan. "Being president needs experience."

High security is expected across the country Sunday, with 38,480 police officers expected to be on duty in Istanbul alone. As is customary in Turkey on polling days, sales of alcohol in shops will also be prohibited.

Turkish police had on Friday detained in Ankara 14 suspected members of the Islamic State (IS) group accused of planning an attack on the elections.

On Saturday, 11 members of the outlawed Kurdistan Workers Party (PKK) were also held in Ankara on suspicion of planning a planning a "provocative action".

The pro-Kurdish People's Democratic Party (HDP), which will be looking to vault over the 10 percent threshold needed to send MPs to parliament, meanwhile held a final large-scale rally in the eastern city of Van.

Its presidential candidate Selahattin Demirtas has campaigned from jail where he has been held since November 2016 on charges of links to the PKK.

Turkey's opposition candidates have repeatedly complained over the lack of airtime offered by largely pro-government media. State-run TRT Haber news channel did now show Ince's speech live at all while only parts were broadcast on privately-owned CNN-Turk.

"There are five million people here in Maltepe. But no television channel is broadcasting this. This is what immorality looks like," said Ince.