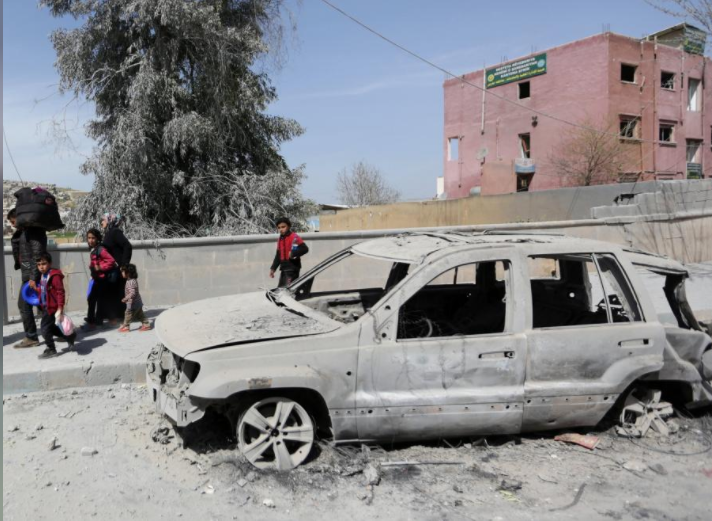 A Kurdish family walks with their belongings in Afrin, Syria March 19, 2018. (Photo: Reuters)

Turkish forces will press their offensive against Kurdish YPG fighters along the length of Turkey’s border with Syria and if necessary into northern Iraq, President Tayyip Erdogan said on Monday, threatening wider conflict in Syria’s civil war.

A day after Turkish troops swept into Afrin, the main town in a pocket of Kurdish-controlled territory in northwest Syria, Erdogan said Turkey would also target a region stretching nearly 400 km (250 miles) east to the northern Syrian town of Qamishli.

Expanding Turkey’s military campaign into the much larger Kurdish-held territory further east would risk confronting troops of a NATO ally, the United States, that are deployed alongside a YPG-dominated force in northern Syria.

The YPG has been Washington’s main ally against Islamic State in Syria, in a partnership that has infuriated Turkey which sees the Kurdish force as an extension of a militant group waging a decades-long insurgency in its own southeast.

It launched an air and ground offensive two months ago against the YPG in Afrin, a campaign it dubbed “Olive Branch”.

“By controlling Afrin city center yesterday, we have passed the most important step of the Olive Branch operation,” Erdogan told a gathering of judges and prosecutors in Ankara.

“After this, we will continue now to Manbij, Ayn al-Arab, Tel Abyad, Ras al-Ain and Qamishli until this corridor is fully removed,” he said, referring to a string of towns along Syria’s border region with Turkey.

Turkish authorities have described the stretch of northern Syria under Kurdish control as a “terror corridor” on the long southern border. YPG officials have said their focus is on guaranteeing legal and constitutional rights for Syrian Kurds.