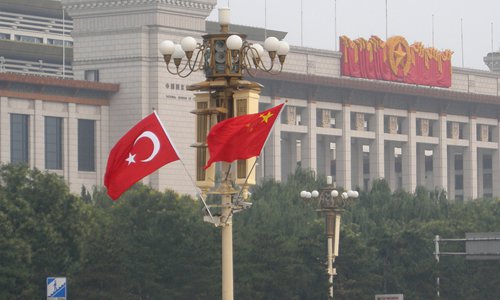 Further promoting economic cooperation and more sustainable bilateral trade ties will be a key focus at the upcoming visit of Turkish President Recep Tayyip Erdogan to China on Tuesday, a former Turkish deputy foreign minister said.Ahmet Yildiz, who is now deputy chairman of the Committee on Foreign Affairs of the Turkish Parliament, said on Friday that the China-proposed Belt and Road Initiative (BRI) is compatible with Turkey's "Middle Corridor" project, which contributes to regional prosperity. "The BRI and Middle Corridor will contribute greatly to regional peace and stability," he said. Turkey's Middle Corridor intends to create new transport routes to Eurasia.  In an exclusive interview with the Global Times, Turkish Minister of Transport and Infrastructure Mehmet Cahit Turhan said that the BRI and Middle Corridor are complementary. "The BRI provides an important opportunity for the integration of countries in the region, and Turkey is a key country under the initiative," Turhan said. He noted that Turkey is eyeing Chinese investment in infrastructure. According to Yildiz, Erdogan will touch on economic issues, including how to address the trade deficit between the two countries. Turkish newspaper Daily Sabah reported that Turkey has a $20 billion trade deficit with China. It said that Turkey aims to have more balanced trade ties with China and the two countries' economic relations will be the focus of the visit next week.At Friday's seminar on China-Turkey relations organized by the Turkish Embassy in China and the China Institute of Contemporary International Relations, Turkish Ambassador to China Abdulkadir Emin Onen said that Erdogan's visit will "surely consolidate the strong strategic cooperative relations" of China and Turkey. "We have a mutual understanding with China to improve our bilateral trade imbalance," he said. He noted that new Turkish products are entering the Chinese market and significant Chinese investments are also being made in the Turkish market. Yildiz said on Friday that Turkey and China share many similarities in perspective, like upholding multilateralism, rather than unilateralism and protectionism, to address global challenges. He said US tariffs not only hurt other countries but the US itself.   Akif Kirecci, a member of the Turkish Presidency Security and Foreign Policies Council, said on Friday on the seminar that Turkey could export more agricultural and energy products to China. He urged Turkish entrepreneurs to consider the rising middle class in China which demands higher quality food, services and recreation.  The number of Chinese tourists to Turkey rose by 6 percent in 2018, reaching 400,000, and this is likely to further expand, the Turkish ambassador said.  However, he noted that the bilateral cooperation still faces some difficulties, given the geographical distance between the two countries, cultural differences and language. Kirecci told the Global Times that Turkey is also haunted by terrorism risks, so they are "looking forward to" working with China to ramp up efforts to fight terrorism.