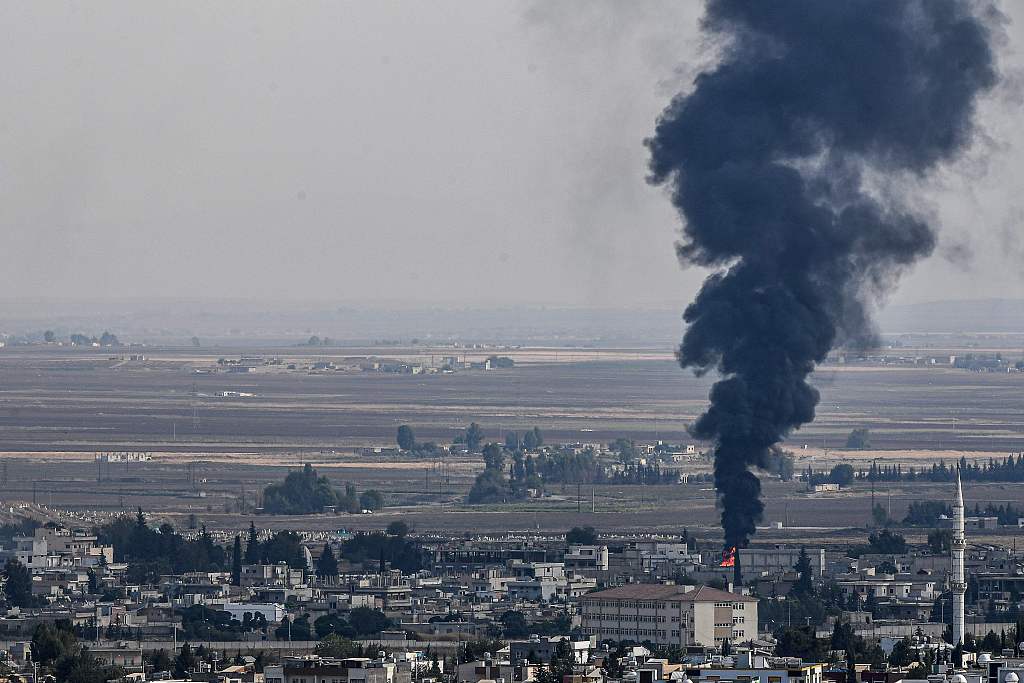 This picture taken on October 18, 2019 from the Turkish side of the border at Ceylanpinar district in Sanliurfa shows fire and smoke rising from the Syrian town of Ras al-Ain. (File photo: VCG)

ISTANBUL, Oct. 26 (Xinhua) -- Turkish President Recep Tayyip Erdogan said on Saturday that if northern Syria is not cleared of terrorists at the end of 150 hours as agreed by Ankara and Moscow in Russia's Sochi, "Turkey will handle it and do all the cleaning single-handedly."

Speaking at an event in Istanbul, the Turkish leader also urged the world to respect his country's sensitivity to the security of its borders and support its plan to create a safe zone in northern Syria along the border.

"We are working to establish a safe zone to prevent the PKK, YPG and Daesh attacks against our country from Syria," he said, referring respectively to the outlawed Kurdistan Workers' Party, the People's Protection Units and the Islamic State.

Erdogan stressed that Turkey achieved its goal regarding the safe zone to a large extent.

On Oct. 22, Turkey and Russia adopted a joint memorandum on the situation in Syria following talks between Erdogan and his Russian counterpart Vladimir Putin in Sochi.

Under the deal, the Kurdish YPG fighters are expected to be withdrawn to a depth of 30 km from the Turkish-Syrian border in 150 hours.

"If the terrorist organizations continue their attacks from within or outside of the 30-km line, we will pursue them to wherever they flee," Erdogan said.

He reiterated his threat to open Turkey's border gates for refugees to go to Europe if European countries would not support Ankara's plans to resettle one to two million Syrian refugees currently residing in Turkey in the safe zone.

Turkey halted its military offensive in northern Syria launched on Oct. 9 against the Kurdish militia, mainly the YPG, after reaching respective agreements with the United States and Russia.