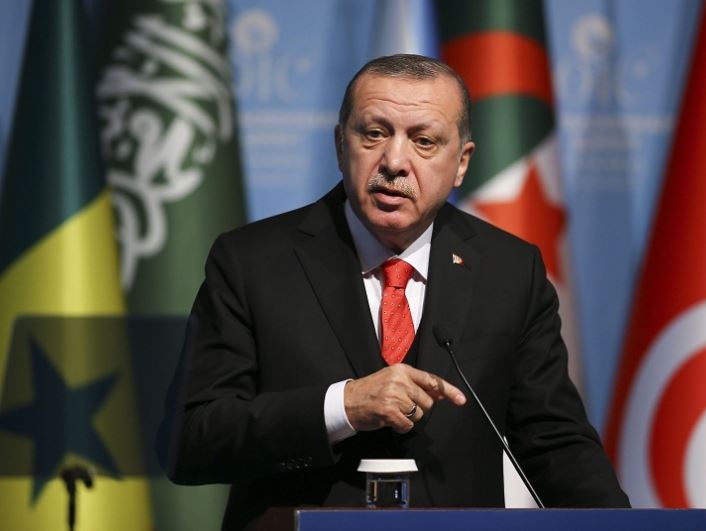 ANKARA, Dec. 14 (Xinhua) -- Turkish President Recep Tayyip Erdogan said on Friday that his country has run "out of patience" with its NATO partner, the United States, over its support for the Kurdish militia in Syria, threatening a renewed military offensive soon.

"We will no longer tolerate a single day of delay. We are determined to bring peace and security to areas in the east of the Euphrates," he said during an international conference in Istanbul.

Erdogan was referring to the territory east of Euphrates, which was controlled by Syrian Kurdish People's Protection Units (YPG), a mainly Kurdish militia in Syria backed militarily by Washington despite Ankara's objections.

On Wednesday, Erdogan said Turkish troops will be marching soon into northern Syria.

"We will start an operation in the next few days to free the east of the Euphrates from the separatist terrorist organization," he said.

Turkish threats have raised the specter of confrontation between the NATO allies and prompted a rebuke from the Pentagon which said any unilateral military action would be unacceptable and threaten US. personnel.

Analysts say the nearly two-year diplomacy between Ankara and Washington over Syria, particularly regarding the strategic zones held by Kurdish fighters, has proven to be unsuccessful.

"Turkey considers the US policy there (northern Syria) as delaying tactics in order to win time. But this time, Turkey's patience is wearing thin and indeed has been gone," Oytun Orhan, a researcher on Syria from the Ankara-based Center for Middle Eastern Studies, told Xinhua.

Turkey and the United States have been in close contact over the Syrian town of Manbij, located in the east of the Euphrates River and held by the YPG.

However, Turkey accuses Washington of dragging its feet on implementing a deal brokered with Turkey to clear Kurdish fighters from the small town near the Turkish border.

On Friday, Erdogan warned that Turkey will seize Manbij if the United States fails to remove the YGP from the area.

"The YPG issue is a matter of national security for Turkey. It has tried until now to have a dialogue on this vital question with the US and to convince its NATO partner, but it doesn't seem to work," Orhan explained.

The United States has been supporting the YPG in its fight against the Islamic State (IS) militants since 2015.

Following cross-border shelling from Turkey into Kurdish-controlled territory two months ago, US forces have set up three military observation posts near the border despite Ankara's sharp criticisms.

"It's clear that the purpose of US observation posts in Syria is not to protect our country from terrorists but to protect terrorists from Turkey," said Erdogan.

Turkey sees the YPG as a terrorist organization and an extension of the outlawed Kurdistan Workers' Party (PKK), which has been engaged in an insurgency in southeastern Turkey for more than three decades.

However, a new cross-border operation conducted by Turkey in Syria with the Turkey-backed Free Syrian Army rebels, according to experts, will be a limited one for the moment.

"There is no doubt that it will be a limited operation with Syrian rebels on the ground supervised by Turkish officers, but the ultimate Turkish objective with more operations in the future is to make sure that the YPG will have no presence in the area," Orhan said.

Turkey has already swept YPG fighters from Afrin and other areas in the west of the Euphrates over the past two years, but has not reached east of the river, partly to avoid direct confrontation with the 2,000-strong US forces deployed there.

Seen by observers as a prelude to an imminent Turkish incursion into Syria, Turkish warplanes recently conducted strikes against bases of the PKK in northern Iraq, 180 km inside Iraqi territory, the deepest conducted since the 1990s, in order to cut the logistic link between the PKK in Iraq and the YPG in Syria.

Erdogan on Friday said the aerial campaign in Iraq is part of a large-scale operation that would include an offensive in northeastern Syria soon.

"Turkey's struggle against the terrorist organization is an existential one. We cannot let this organization control northern Iraq and northern Syria," a Turkish diplomat told Xinhua.

"Turkey is a sovereign country and will do whatever necessary to eradicate what it sees as a threat to its national security. We will not let other countries compromise our security," he said on condition of anonymity, in a veiled reference to the United States.

Several thousands of Syrian rebels have already reportedly announced readiness to join a Turkish offensive, which would be launched simultaneously from Turkey and Syria.