WORLD Erdogan warns Turkey's partnership with US 'in jeopardy'

Erdogan warns Turkey's partnership with US 'in jeopardy' 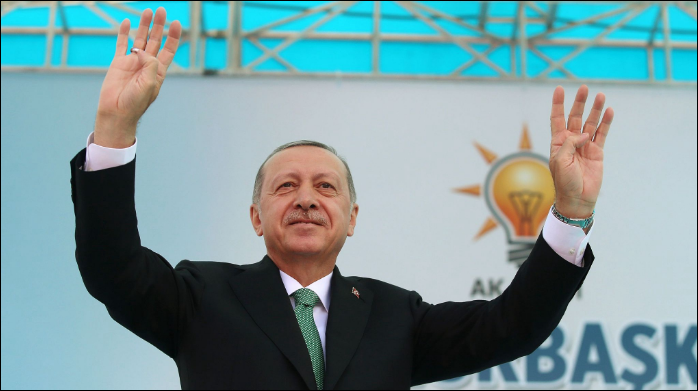 President Recep Tayyip Erdogan said Turkey's partnership with the US may be in jeopardy as ties strain, warning Ankara could start looking for new allies, in an op-ed published in the New York Times on Saturday.

US 'wrong' to threaten Turkey

The two governments have been at odds over a wide range of topics, from diverging interests in Syria, to Turkey’s ambition to buy Russian defense systems and the case of evangelical pastor Andrew Brunson, who is on trial in Turkey on terrorism charges, according to Reuters.

The embattled Turkish lira tumbled 16 percent against the dollar on Friday, with US President Donald Trump saying he had doubled steel and aluminum tariffs on Turkey in comments that contributed to the currency's further slide.

Erdogan on Saturday said it was wrong of the US to try to bring Turkey into line with threats, a day after Trump's "doubled tariffs" announcement.

Erdogan made the remarks when he told a crowd of supporters in the Turkish town of Unye on the Black Sea coast. In comments towards the US, he said it is a pity that "you choose a pastor over your strategic partner in NATO."

In the New York Times, Erdogan warned Washington not to risk relations with Ankara, saying otherwise his country would look for "new friends and allies."

Unless the US starts respecting Turkey’s sovereignty and proves that it understands the dangers that our nation faces, our partnership could be in jeopardy, Erdogan wrote.

"Before it is too late, Washington must give up the misguided notion that our relationship can be asymmetrical and come to terms with the fact that Turkey has alternatives," he opined, calling that Turkey will take necessary steps to protect national interests.

'Not good at this time'

In a tweet, Trump announced the doubling of the tariffs in new punitive actions against Turkey, saying, "Our relations with Turkey are not good at this time!"

Erdogan downplayed the currency crisis in a speech on Friday, advising Turks not to be worried over exchange rate fluctuations.

Erdogan repeated a call to Turks to sell dollars and euros to support the lira to win what he described as a "war of independence," Reuters reported on Saturday.

The arrest and detention of US pastor Brunson since October 2016 has soured already deeply delicate relations with Washington.

In the New York Times article, Erdogan said, "Attempting to force my government to intervene in the judicial process is not in line with our Constitution or our shared democratic values."

Trump has described Brunson's detention as a "total disgrace" and urged Erdogan to free him "immediately."(source: CGTN)