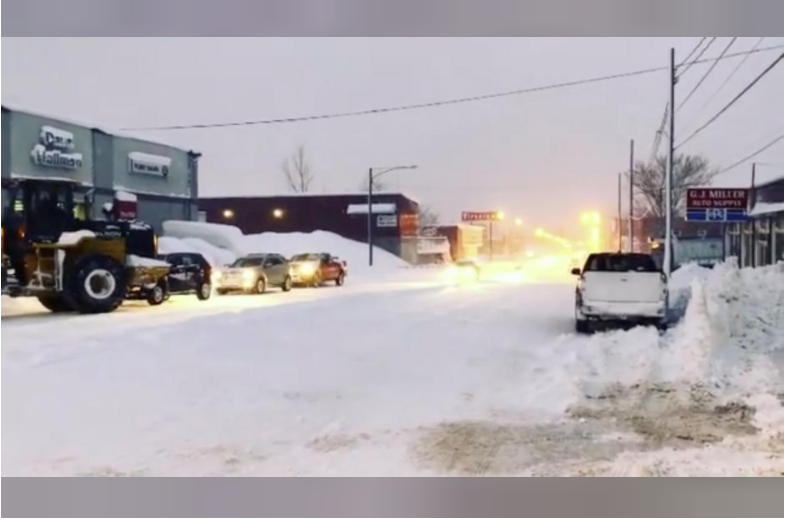 A general view of 1925 State Street after the record snowfall in Erie, Pennsylvania, US, December 26, 2017 in this picture obtained from social media. Photo: REUTERS

A storm that has dumped more than 65 inches (165 cms) of snow this week on Erie, Pennsylvania, is expected to slightly taper off on Wednesday after leaving drifts that buried cars, paralyzed the area and made the county declare an emergency.

But the respite for Erie, a city of about 100,000 in northwest Pennsylvania on the shores of Lake Erie, is expected to be short-lived, with a fresh round of winter storms coming Thursday night predicted to bring as much as 10 inches more snow, forecasters said.

“This is a crippling snow event,” said Zach Sefcovic, a meteorologist with the National Weather Service in Cleveland.

“They are no strangers to snow in that part of the state, but this much snow in that short a time is just unprecedented,” he said in a telephone interview.

Large parts of the United States were gripped by freezing weather, with an area stretching from Montana to Maine expected to see temperatures below 10 degrees Fahrenheit (-12.2 degrees Celsius) early on Thursday, the National Weather Service said.

The winter blast in Erie was caused by cold Arctic air moving over the lake, which had relatively mild water temperatures, forecasters said.

The storm broke a 59-year-old record for a two-day snowfall in Pennsylvania, topping the 44 inches that fell in 1958. Erie County Executive Kathy Dahlkemper issued a temporary disaster emergency declaration that mobilized resources to help the area.

Pictures of residents on social media showed drifts reaching beyond window-levels in houses and people clearing paths through chest-high accumulations.

”Out of Doritos. Family is arguing. Dogs are getting ornery. It’s been 3 days since my last chicken wing. We are out of whiskey,” wrote Nicole Massari on her Instagram account @theworldaroundnikki, along with a video showing her Pennsylvania home surrounded by snow.

Pennsylvania Governor Tom Wolf deployed 21 Pennsylvania National Guard troops along with some all-terrain military vehicles to the region on Tuesday to help residents dig out and transport emergency responders around the area.

Erie resident Brian Sheridan on Wednesday posted a photo on social media showing the top of his mail box peeking out underneath a mound of snow. In a caption, he wrote: “At this point, it just might be easier to put a hold on our mail until spring.”