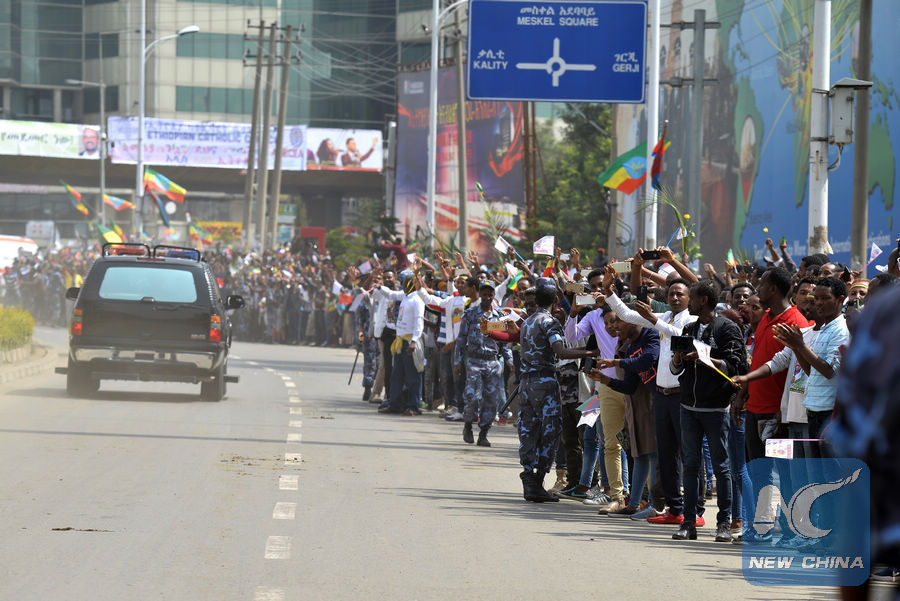 Eritrean Leader Isaias Afwerki arrived in the Ethiopian capital Addis Ababa for a three-day state visit on Saturday amid tight security, the first visit by the Eritrean leader to Ethiopia in more than 20 years.

Thousands of Ethiopians lined the streets of Addis Ababa singing and chanting, wearing makeup with Eritrean and Ethiopian symbols while others wore T-shirts with images of Afwerki and Ethiopian Prime Minister Abiy Ahmed.

He's also expected to re-open the Eritrean embassy in Addis Ababa which has been shut for almost 20 years.

Ahmed made a similar visit to Eritrea's capital, Asmara last weekend, welcomed by Afwerki and given a street parade with thousands of Eritreans lining the streets to greet Ahmed.

The visits by Afwerki and Ahmed to each other's countries come in a month of fast moving events, ever since the Executive Committee of the Ethiopian People's Revolutionary Democratic Front (EPRDF) decided on June 5, to fully accept a December 2000 peace deal between the two countries that ended a brutal border war that killed an estimated 70,000 people from both sides.

The two countries on Monday signed a peace declaration, with the two neighbors agreeing on implementation of the peace agreement and resumption of diplomatic and economic ties.

Eritrea is eager to end its self-isolation from the East African region while landlocked Ethiopia is eyeing Eritrea's long coastline as an alternative sea outlet for its fast-growing economy. Ethiopia currently conducts about 95 percent of its foreign trade through Djibouti port.

Ethiopia's flag carrier Ethiopian Airlines has already announced it will start flights to Eritrean capital, Asmara on July 18, the first flights by an Ethiopian air carrier in 20 years, while telephone lines between the two countries was restored earlier this week.