Heavy fighting continues in the mountainous enclave of Nagorno-Karabakh. Azerbaijan's president said late Saturday that his troops had taken a town and several villages while Armenian officials claimed their troops inflicted heavy casualties on their rivals. 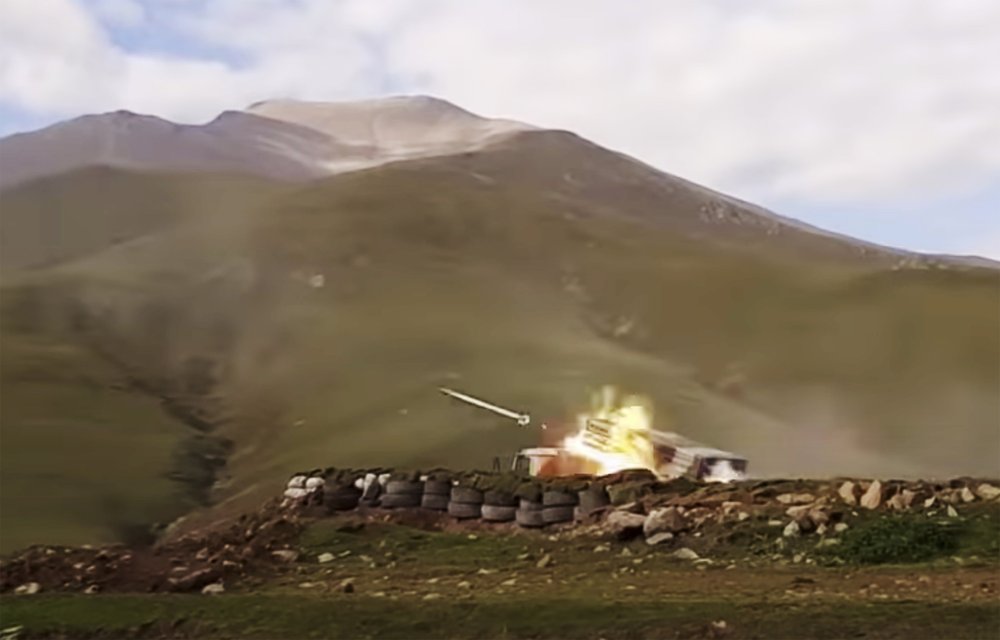 Fighting broke out on September 27 in the region, located within Azerbaijan but controlled by local ethnic Armenian forces. It is some of the worst in Nagorno-Karabakh and the surrounding areas since the end of a war in 1994.

Armenian defense ministry spokeswoman Shushan Stepanian said intensive fighting was "taking place along the entire front line" on Saturday and that Armenian forces had shot down three planes, which has been denied by Azerbaijan's defense ministry. And the Azeri side criticized Armenian personnel for shelling civilian territory.

The interior of a civilian house in Stepanakert after a crossfire between Azerbaijan and Armenia, October 3, 2020. /VCG

Advance in the battleground

Each side said it had destroyed hundreds of the other's tanks. The Azeri side claimed gains, and President Ilham Aliyev sent congratulations to a military commander on the capture of a Karabakh village.

"Today the Azeri army raised the flag of Azerbaijan in Madagiz. Madagiz is ours," Aliyev declared on social media. He later announced the capture of seven more villages.

Armenian defense ministry official Artsrun Hovhannisyan said the situation was changing frequently. "In such a large war such changes are natural. We can take a position, then leave it in an hour," he told reporters.

Armenian Prime Minister Nikol Pashinyan told his countrymen in a televised address that though the country already has "significant human losses, both military and civilian, large quantities of military equipment are no longer usable, the adversary still has not been able to solve any of its strategic issues."

Regional and military analysts say the Azeris lack the firepower to overrun Karabakh completely but may settle for territorial gains that will enable them to declare a victory and gain leverage in future negotiations.

Nagorno-Karabakh officials have said more than 150 servicemen on their side have died so far. Azerbaijani authorities haven't given details on their military casualties but said 19 civilians were killed and 55 more wounded.

Vahram Poghosyan, a spokesman for the self-proclaimed Republic of Nagorno-Karabakh president, claimed Saturday on Facebook that intelligence data showed some 3,000 Azerbaijanis have died in the fighting.

Armenian defense ministry spokesman Artsrun Ovannisian said later that 2,300 Azerbaijan troops were killed, about 400 of them the previous day.

With Azerbaijan not commenting on troop casualties, the statements could not be verified. 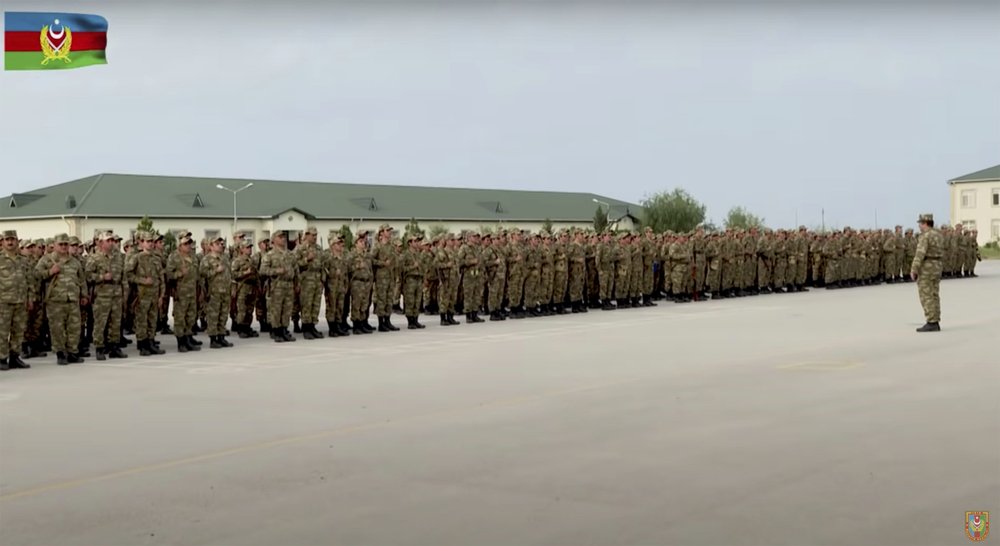 Azerbaijan's soldiers stand in formation at a military base during fighting with forces of the self-proclaimed Republic of Nagorno-Karabakh, Azerbaijan. /A handout photo by Azerbaijan's defense ministry

Nagorno-Karabakh was a designated autonomous region within Azerbaijan during the Soviet Union era. It claimed independence from Azerbaijan in 1991, about three months before the Soviet Union's collapse. A full-scale war that broke out in 1992 killed an estimated 30,000 people.

By the time the war ended in 1994, Armenian forces not only held Nagorno-Karabakh itself but substantial areas outside the territory's formal borders, including Madagiz, the village Azerbaijan claimed to have taken Saturday.

Several United Nations Security Council resolutions have called for withdrawal from those areas, which the Armenian forces have disregarded.

Aliyev said in the television interview that the Armenians must withdraw from those areas before the latest fighting can stop. Its ally Turkey also made it clear that Armenian "occupiers" must withdraw and it rejected "superficial" demands for a ceasefire.

In the interview with Al Jazeera, Aliyev criticized the so-called Minsk Group of the Organization for Security and Cooperation in Europe, a meditation group, saying it has run out of patience with decades of ineffective diplomacy that have failed to lead to the return of its lost territory.

One reason behind the current fighting is that "the mediators do not insist or exert pressure to start implementing the resolutions of the United Nations Security Council," he said.

"We have no time to wait another 30 years. The conflict must be resolved now." Aliyev said. 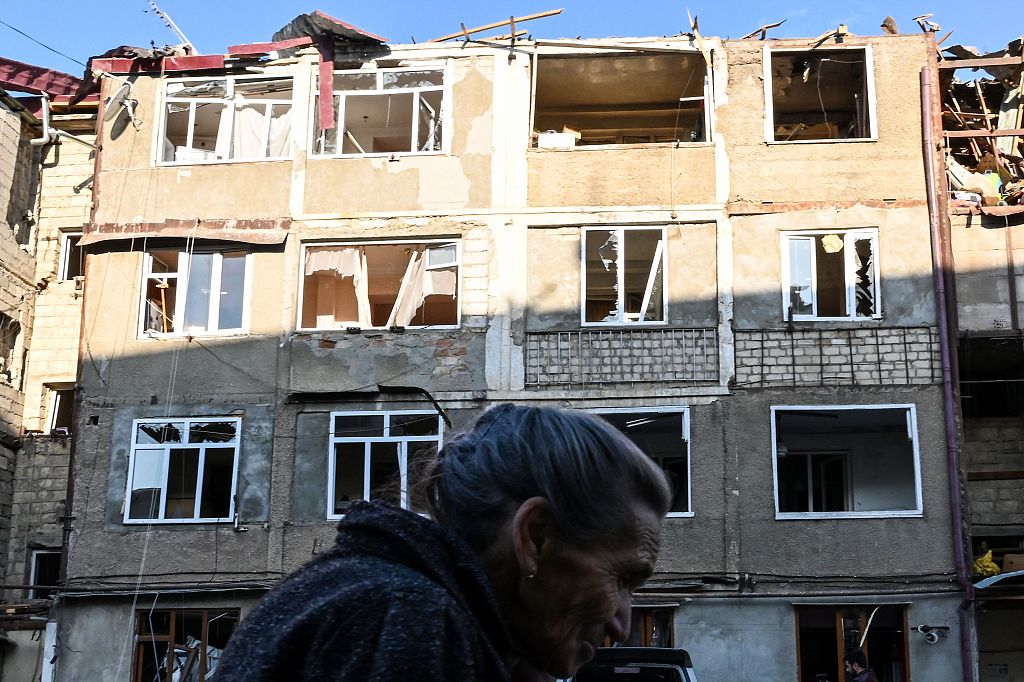 Civilian houses in Stepanakert, the largest city in Nagorno-Karabakh, are destroyed during exchanges of fire between Azerbaijan and Armenia, October 3, 2020. /VCG

Both Turkey and Azerbaijan have repeatedly denied the involvement of Turkish forces, as well as assertions by Armenia, Russia and France that Syrian rebels are fighting on the Azeri side.

Azerbaijan hit back, saying in a statement on Saturday that ethnic Armenians from Syria, Lebanon, Russia, Georgia, Greece and the United Arab Emirates had been deployed or were on their way to operate as "foreign terrorist fighters" on the ethnic Armenian side.

(With input from Reuters and AP)