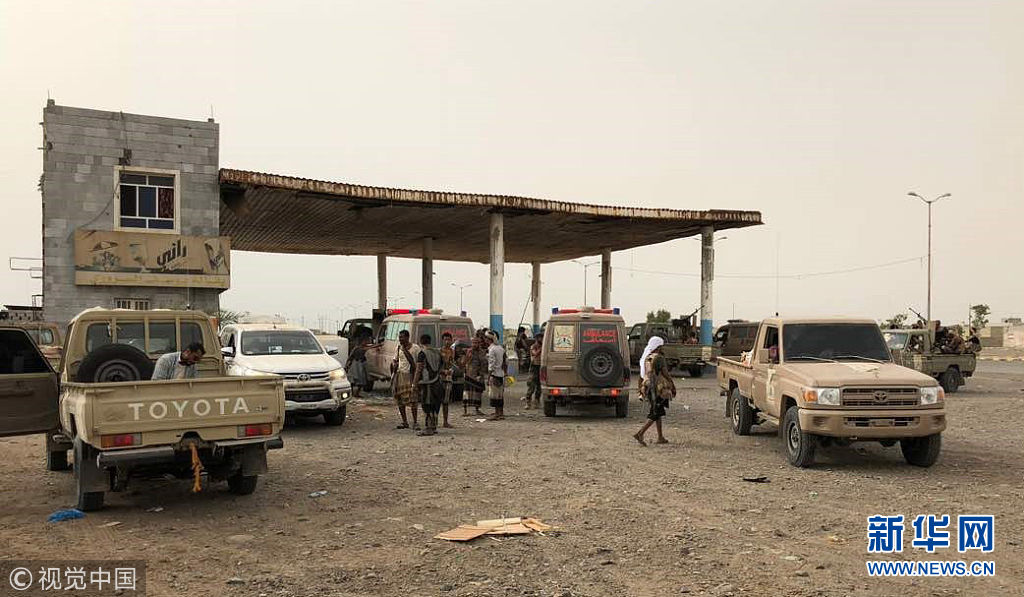 ADEN, Yemen, Nov. 7 (Xinhua) -- Ferocious fighting between Yemen's government forces and the Houthi rebels is still raging for the sixth consecutive day in Red Sea port city of Hodeidah, promoting deep concerns about the fate of medical institutions in the war-torn city.

As the government forces backed by the Saudi Arabia-led coalition continued advancing with their military operations against Houthis in Hodeidah, the intensified airstrikes and long-range artillery forced hundreds of new families to flee their houses and seek shelter in other neighboring provinces.

Yemeni observers said that the escalating fighting, which aimed at retaking Hodeidah from the Houthi rebels, could cause major destruction for the city's already weakened infrastructure and potentially affect the few operating medical centers there.

Hodeidah's residents started to worry about the fate of the their patients receiving treatment at the city's main hospital Thawrah and other medical centers after the deployment of Houthi fighters in the area that might be targeted later with airstrikes, according to local sources.

An official close to Hodeidah's governor told Xinhua that "commanders of government forces consider the medical institutions based in Hodiedah as a red line and they will take possible measures to protect the citizens."

"There are plans to avoid attacking Houthis positioned near hospitals and the military operations came just to rescue the helpless citizens from the Houthis' grip," the source said.

He said that the Iranian-backed Houthis started deploying snipers on rooftops of the hospitals' buildings in Hodeidah, threatening the patients and complicating the efforts aimed at avoiding the fighting in that areas.

"Several Houthi fighters stormed the 22nd May hospital by force and started using it as a military site to repulse the government forces regardless of the patients' safety," he added.

Ahmed Qadhy, a journalist based in Hodeidah, said that both of the warring factions are posing a major threat for the safety of people in Hodeidah's hospitals.

"The warplanes might target Houthi snipers positioned on rooftops of the buildings, causing a catastrophe," the journalist said.

"Civilians in Hodeidah are at risk and facing a real threat without any support from the international organizations to provide protection for them," he added.

A source close to the Houthi group refuted the "allegations" regarding the deployment of snipers on rooftops of hospitals in Hodeidah province.

"There is a random shelling against everything in Hodeidah and the coalition is going to attack hospitals but will use the pretext of snipers," the source said.

In August, the Saudi-led coalition and the Houthis blamed each other for the shelling that damaged Yemen's largest Thawra hospital, on which hundreds of thousands of people rely.

At that time, the Saudi-led coalition denied carrying out an air strike that killed at least 26 people in Hodeidah's hospital and blamed the Houthi fighters for the carnage.

On Tuesday, head of the UN children's agency UNICEF called for an end to intense fighting near the main hospital in Hodeidah, which threatened the lives of 59 children including 25 in intensive care.

"UNICEF calls on all parties to cease hostilities near and around the hospital, to ensure that civilians can safely access the hospital from all sides and to abide by their legal obligations to stop attacks against civilian infrastructure including the port of Hodeidah," Henrietta Fore, executive director of UNICEF, said in a statement issued at the agency's headquarters here.

She said that the forces battling near Al Thawra Modern General Hospital are "dangerously close... putting the lives of 59 children including 25 in the intensive care unit at imminent risk of death."

Hodeidah is the most important and only point of entry for food and basic supplies to Yemen's northern provinces controlled by Houthis, including the capital Sanaa.

The Yemeni government is seeking to expel Houthi rebels out of Hodeidah in recent days despite warnings by international humanitarian agencies.

The United Nations has listed Yemen as the country with the world's biggest humanitarian crisis, with seven million Yemenis on the brink of famine and cholera causing more than 2,000 deaths.