DUBLIN, Feb. 12 (Xinhua) -- An Irish high court in Dublin on Wednesday granted a lorry driver an appeal against his extradition to the United Kingdom (UK) over his alleged involvement in multiple counts of manslaughter. 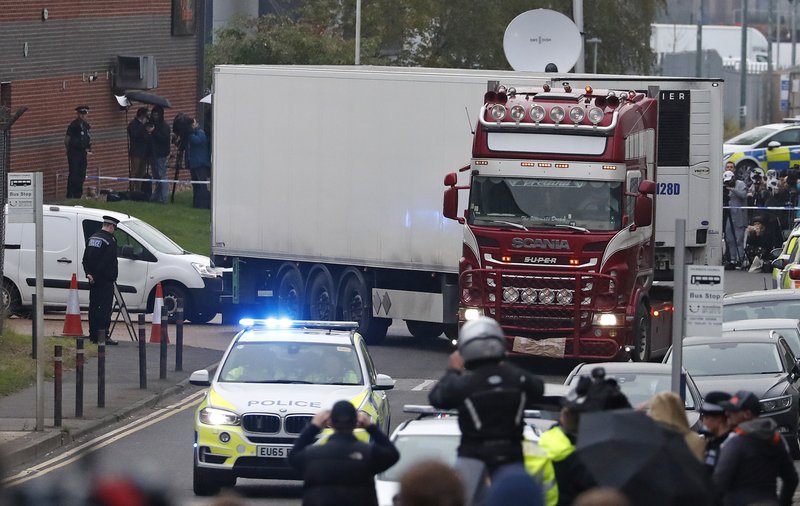 In this Wednesday Oct. 23, 2019 file photo, police escort the truck, that was found to contain a large number of dead bodies, as they move it from an industrial estate in Thurrock, south England. British police say they have arrested a 23-year-old man from Northern Ireland, Friday Nov. 22, 2019, over the deaths of 39 people from Vietnam who were found dead in a refrigerated container truck last month. (File photo: AP)

The man faces charges after the bodies of 39 illegal Vietnamese immigrants were found in a refrigerated trailer in Essex in the UK last October, local media RTE reported.

The report quoted high court judge as saying that Eamon Harrison, a 23-year-old truck driver from Northern Ireland, had been granted a right to appeal to the Court of Criminal Appeal against a ruling about his extradition made by the high court earlier this month.

Harrison, a dual Irish-British citizen, is wanted by the British police for his alleged involvement in last October's Essex incident. He faces 39 counts of manslaughter, conspiracy to assist unlawful immigration, and conspiracy to commit human trafficking under UK law.

Harrison is alleged to have delivered a trailer in which the 39 bodies were found to a Belgian port before its onward journey to Britain, where the trailer was collected from a port in Essex by another driver, who is also from Northern Ireland.

According to local media reports, Harrison was arrested in November 2019 when he traveled to Ireland and has since been held in custody by the Irish police.