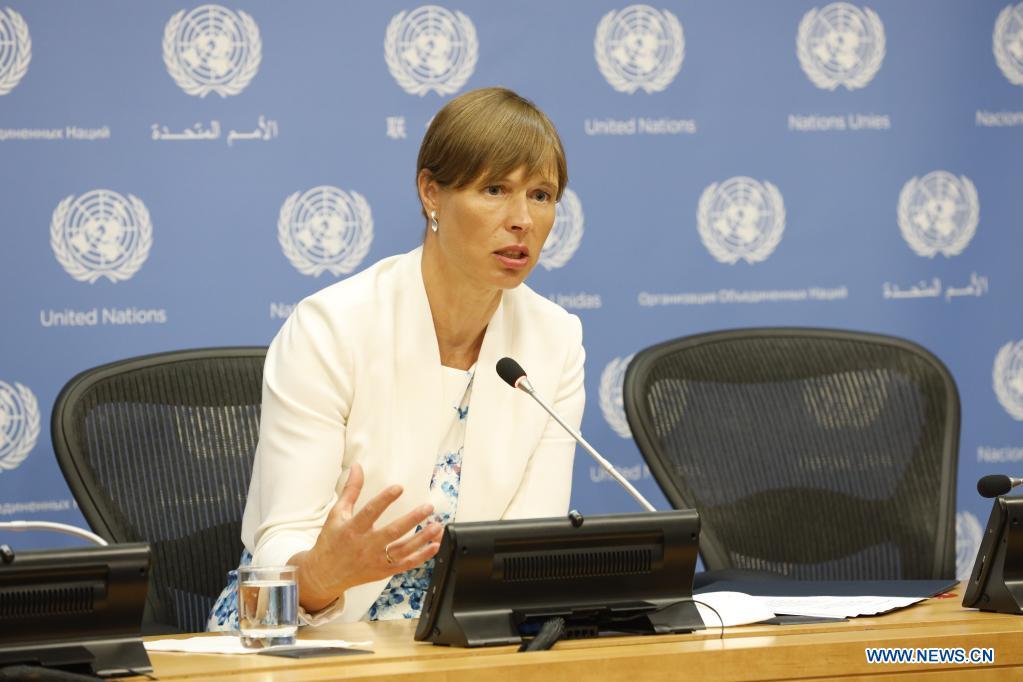 Estonian President Kersti Kaljulaid speaks to the press after her appointment at the UN headquarters in New York, on June 28, 2021. (Photo: Xinhua)

UNITED NATIONS, June 28 (Xinhua) -- United Nations Secretary-General Antonio Guterres on Monday designated Estonian President Kersti Kaljulaid as his global advocate for the health and well-being of women, children and adolescents for the next two years.

The health and well-being of women, children and adolescents is central to the 2030 Agenda for Sustainable Development, according to a UN press release.

"Yet today, women and children are bearing the brunt of the COVID-19 crisis and are disproportionately impacted by growing conflicts, rising social inequality, and vulnerabilities wrought by climate change. In this complex global environment, putting the most vulnerable at the forefront of the development agenda is critical if we are to build the peaceful, sustainable and inclusive societies we have promised to achieve through the Sustainable Development Goals (SDGs)," it said.

To achieve these goals, the secretary-general appointed President Kaljulaid as his Global Advocate for Every Woman Every Child.

This is a first-of-its-kind appointment to raise global awareness, inspire greater ambition, and push for faster cross-sectoral action on the Every Woman Every Child Global Strategy for Women's, Children's and Adolescents' Health, according to the press release.

"In a time of complex development challenges, the investments we make today in women's, children's and adolescents' health and well-being will help build the peaceful, sustainable and inclusive societies we have promised to achieve through the Sustainable Development Goals," the secretary-general said.

"President Kaljulaid of Estonia embodies the mission of Every Woman Every Child. She has been a champion for multilateralism and addressing inequality through leveraging technology as an 'equalizer of opportunity' to reach those left furthest behind," said the press release.