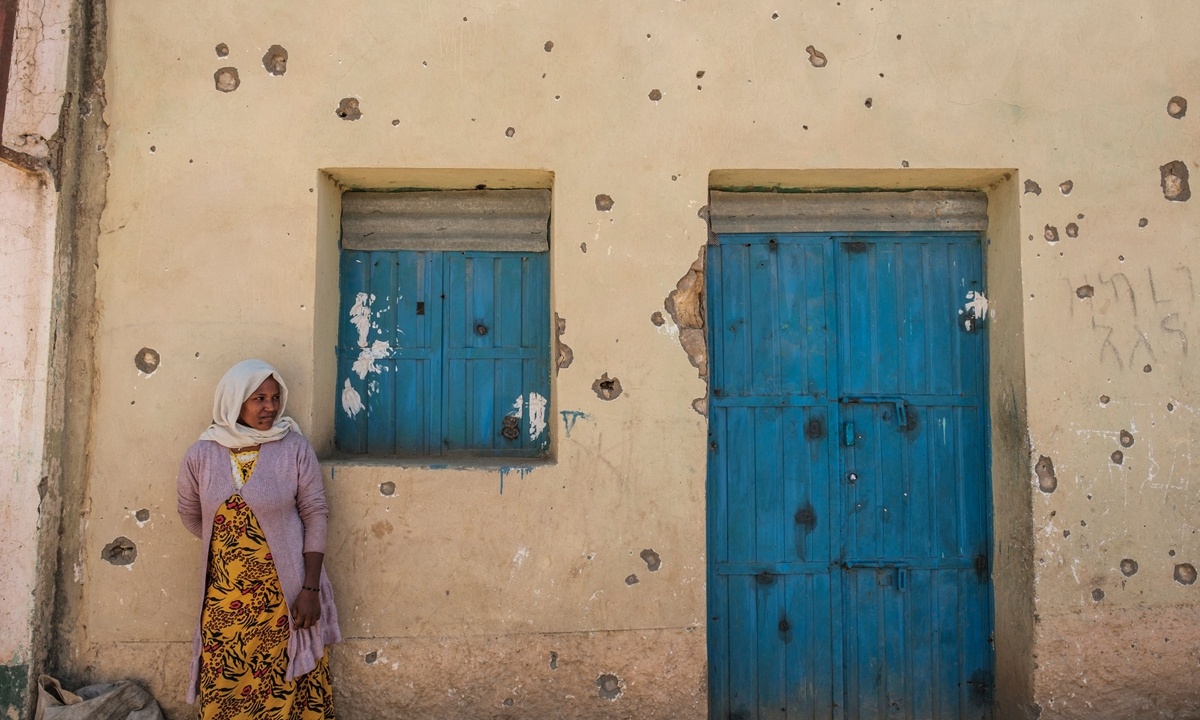 A woman leans on the wall of a damaged house which was shelled as federal-aligned forces entered the city, in Wukro, north of Mekele, on March 1, 2021. (Photo: VCG)

The dramatic reversal for Prime Minister Abiy Ahmed's forces signaled a turning point in the nearly eight-month-old conflict in Tigray, which the UN says has pushed 350,000 people to the brink of famine.

The cease-fire announcement came as the rebels, who have branded themselves the Tigray Defence Forces (TDF), marched into Mekele, where residents danced as local officials fled the city.

"An unconditional, unilateral cease-fire has been declared starting from today, June 28," read a statement published Monday night by state media.

The cease-fire will last until the end of the current "farming season" and is intended to facilitate agricultural production and aid distribution while allowing rebel fighters "to return to a peaceful road," it said.

There was no immediate reaction from the TDF to the federal government's cease-fire declaration.

UN Secretary-General Antonio Guterres said Monday he had spoken with Abiy, winner of the 2019 Nobel Peace Prize, and was "hopeful that an effective cessation of hostilities will take place."

He called recent events in Tigray "extremely worrisome" saying they "demonstrate, once again, that there is no military solution to the crisis."

The British embassy in Ethiopia said the cease-fire was an "important development" and called on all parties to respect it.

Britain, the US and Ireland have called for an emergency UN Security Council public meeting, which could happen on Friday, diplomatic sources said. The UNSC has failed to hold a public session on Tigray since the war began last November, with many African countries, China, Russia and other nations deeming the crisis an internal Ethiopian affair.

The war in Tigray began last November, when Abiy sent troops in to oust the dissident regional leadership.

He said the move came in response to attacks by the regional ruling party, the Tigray People's Liberation Front (TPLF), on federal army camps.

Abiy promised a swift victory, and federal troops took control of Mekele in late November. But intense fighting has persisted throughout the region amid mounting reports of massacres.