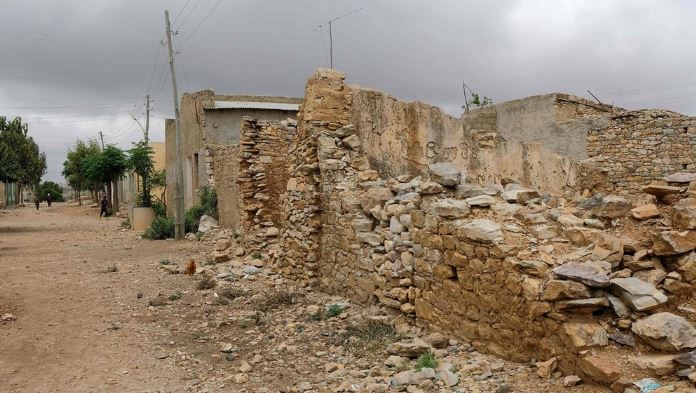 A ruined house which was destroyed during the war between Ethiopia and Eritrea is seen in Zalambesa, a town on the border with Eritrea, northern Ethiopia, July 13, 2018. (Photo: VCG)

Two land border crossings between Ethiopia and Eritrea were reopened Tuesday for the first time in 20 years, crowning a rapid reconciliation between the former bitter enemies.

The ensuing cold war stymied development and trade, and undermined regional security. However, in a surprise move earlier this year Abiy began peace overtures, which were welcomed by Eritrea.

Key to this was Abiy's acceptance in June of a UN-backed court ruling in 2002 demarcating the contested border and handing back some occupied territory to Eritrea, including the disputed town of Badme.

On Tuesday -- a national holiday to mark Ethiopian New Year -- Abiy and Isaias, dressed in military fatigues, paid a joint visit to the disputed eastern border zone that both countries have claimed. Soldiers lined the road to mark its reopening.

Abiy's chief of staff, Fitsum Arega, said the visit was, "to celebrate the New Year with members of the Ethiopian and Eritrean Defense Forces following the full normalization of the relations between the two countries."

The reopening of border posts is more than symbolism.

Booming but landlocked Ethiopia is eager to secure access to Eritrea's Red Sea coast for its imports and exports, while Eritrea's stunted economy will benefit from increasing regional commerce.

The route through Bure-Debay Sima leads to the port at Assab while the road via Zalambessa-Serha reaches Massawa.

Tuesday's ceremonies were just the latest steps in a rapid diplomatic thaw that has seen Ethiopia and Eritrea restore air links, telephone lines and trade routes, and re-establish diplomatic missions.