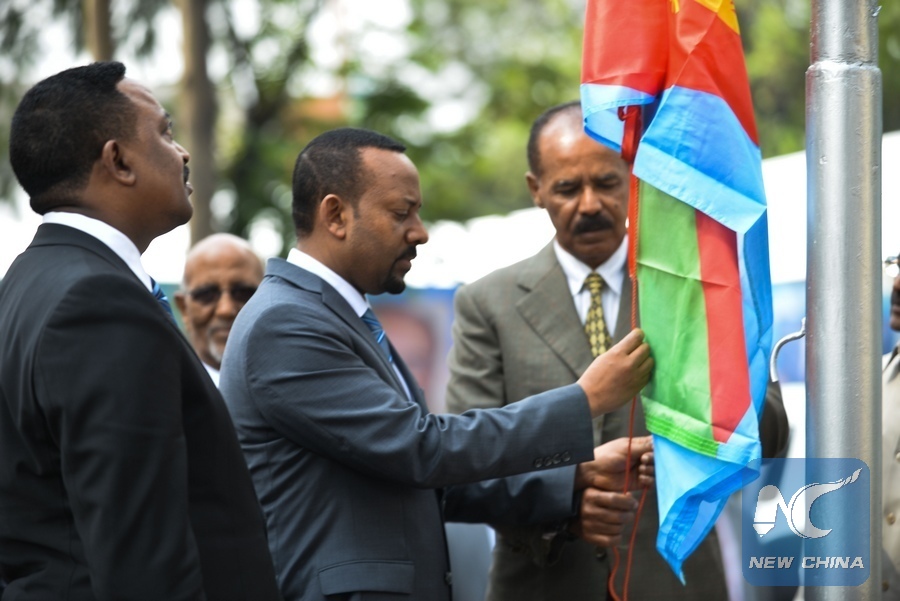 Ethiopia on Thursday reopened its embassy in the Eritrean capital Asmara as the two Horn of Africa countries embark on strengthening ties after the two nations' long-time rivalry ended.

After 20 years of hostility, Ethiopia and Eritrea resumed diplomatic relations recently. On July 8, Ethiopia's PM Ahmed made a landmark visit to the Red Sea nation and a week after, Eritrea's Afwerkipaid a courtesy visit to Ethiopia.

Recent positive developments are considered as a new beginning since the two countries bloody two-year border war from 1998-2000, that killed an estimated 70,000 people from both sides. The war was ended by a December 2000 Algiers peace agreement, but it left the two countries in a state of bitter armed standoff.

Amid the easing tensions, telecom services between the two countries have resumed, embassies resumed diplomatic relations, and agreements were made to strengthen economic ties.

Leaders of the two countries, in another bid to augment their growing ties, had also agreed to increase the movement and amount of bilateral trade through Eritrea's port city of Assab to Ethiopia's capital Addis Ababa.

The decision to construct a pipeline linking Ethiopia's capital Addis Ababa and Eritrea's port has been also unveiled by the Ethiopian government and the United Arab Emirates (UAE), which would allow landlocked Ethiopia to export crude oil via Eritrean port as Ethiopia recently commenced petroleum test extraction from the Somali Regional State in June this year.

Ethiopia's PM arrived in Eritrea on Wednesday for his second visit, in which he visited Eritrean ports as land-locked Ethiopia eyes to use Eritrea's Assab and Metswa ports for its import-export needs.

In addition to diplomatic relations, Ethiopia and Eritrea are also undertaking steps to strengthen cultural and people-to-people links between the two countries.

A cultural symposium, which was held last month here in Addis Ababa, had brought together 500 participants drawn from both countries, including senior government officials from both countries, who discussed various issues that include ways to enhance the cultural and linguistic ties as well as the need for cultural collaboration between Ethiopia and Eritrea.

Ethiopian Minister of Culture and Tourism Fozia Amin said during the symposium that cultural events are vital to advance the people-to-people ties between the two friendly nations.

The move to deepen ties between the two countries through people-to-people relations followed recent momentous culmination of the end of the state of war between the two neighbors.