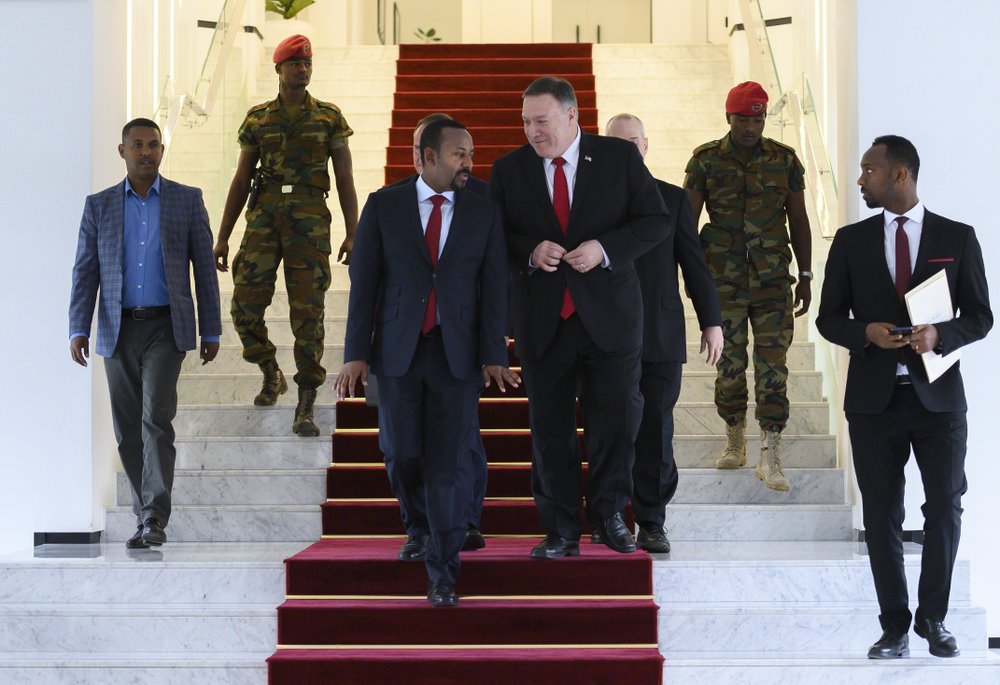 Secretary of State Mike Pompeo and Prime Minister Abiy Ahmed also spoke about Ethiopia’s dispute with Egypt over a massive dam project on the Nile River. “A great deal of work remains but I’m optimistic that over the coming months we can resolve this,” Pompeo said. An agreement had been expected this month.

Ethiopia is Africa’s second most populous nation, with well over 100 million people, and a key US security ally in the Horn of Africa. Abiy is under growing pressure to uphold the reforms that won him the Nobel last year. He took office in 2018 and quickly eased regional tensions, freed political prisoners and welcomed opposition groups home from exile.

But a major test looms in August with an election that the prime minister has repeatedly vowed will be free and fair. Analysts warn that his loosening of repressive measures has unleashed long-held grievances among some of the country’s more than 80 ethnic groups. Clashes at times have turned deadly.

“A free and credible vote will show that everyone has a voice,” Pompeo told reporters in Ethiopia’s capital, Addis Ababa. The US says it has mobilized $37 million to support the country’s elections board.

“We have no experience of democracy in the past but we are opening up the space for all,” said Ethiopian Foreign Minister Gedu Andargachew.

Separately, the Trump administration has pressed Abiy and his government to find a peaceful resolution to its dispute with Egypt over the Grand Ethiopian Renaissance Dam, which is nearing completion.

Ethiopia says the dam is crucial in helping to pull many of its people out of poverty, while Egypt warns that too-rapid filling of the dam’s reservoir in the coming years will imperil its share of Nile waters.

Washington has stepped in to help host several rounds of talks after Abiy warned that his country could muster millions to fight over the dam issue but preferred to negotiate a peaceful solution.

Pompeo on Tuesday also announced that the US would provide another $8 million to support efforts to fight a massive locust outbreak in Ethiopia, Kenya and Somalia.

The secretary of state is the first Cabinet official to visit Africa in 18 months. He also stopped in Senegal and Angola on a trip that seeks to reassert US interests on a continent that many have accused the Trump administration of largely neglecting. China, Africa’s top trading partner for a decade now, is a major US concern.

Ethiopia has close business ties with China and has grown closer to wealthy Gulf nations on the other side of the nearby Red Sea as well. Numerous global powers have been turning their focus to the African continent of more than 1.2 billion people, many of them young.

Analysts have said a key task for Pompeo is countering the recent messaging out of Washington as the Pentagon considers cutting US military presence in Africa and new visa restrictions target Nigerians, Sudanese, Tanzanians and Eritreans.

“Peace in Africa will be won by Africans,” Pompeo told reporters.