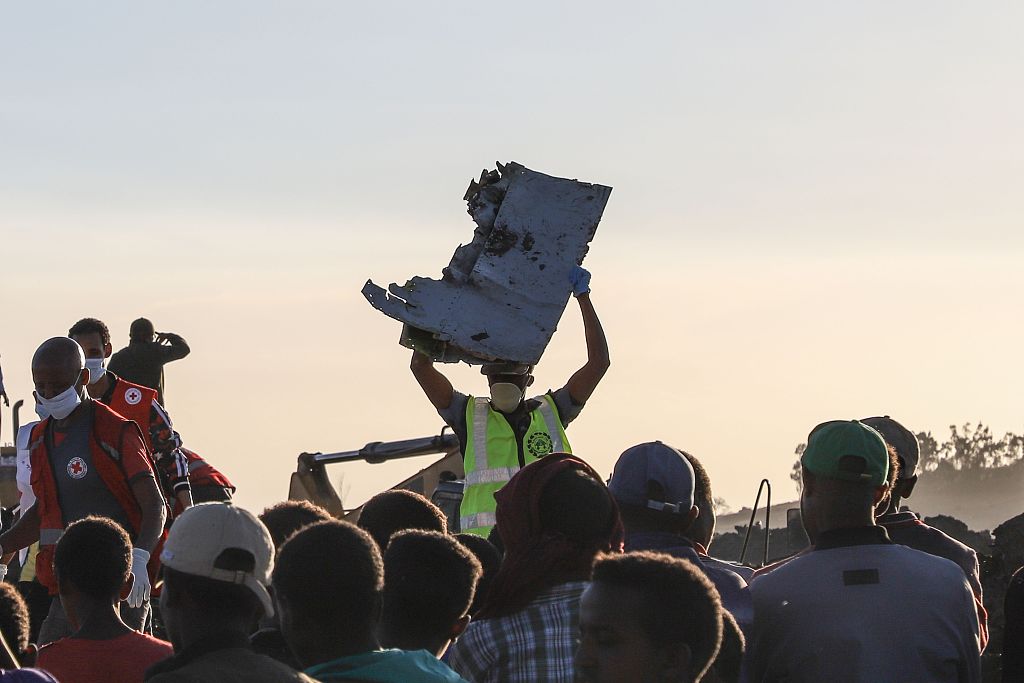 A man carries a piece of debris on his head at the crash site of a Nairobi-bound Ethiopian Airlines flight near Bishoftu, a town some 60 kilometres southeast of Addis Ababa, Ethiopia, on March 10, 2019. A Nairobi-bound Ethiopian Airlines Boeing crashed minutes after takeoff from Addis Ababa on March 10, killing all eight crew and 149 passengers on board, including tourists, business travellers, and "at least a dozen" UN staff. (File photo: VCG)

Officials from the Ethiopian Airlines Group and Ethiopian Ministry of Foreign Affairs on Monday briefed envoys of countries whose nationals were killed in Sunday's plane crash.

The 157 people aboard the ET 302 flight from Ethiopian capital Addis Ababa to Kenyan capital Nairobi, included 149 passengers and 8 crew members. The victims were of 35 nationalities, including 32 from Kenya, 18 from Canada, eight each from China, Italy and the United States, seven each from Britain and France, six from Egypt, and five from Germany, among others, according to the airline.

Briefing envoys of countries whose nationals were involved in the deadly jet crash, Deputy CEO of Ethiopian Airlines Group Esayas Woldemariam said that concerted efforts are underway so as to find out the major cause of the plane crash.

Woldemariam, noting "the devastating impact of the tragic accident," further expressed Ethiopian Airlines' commitment "to support and facilitate relatives and families of victims as they lost their loved ones."

Nebiat Getachew, spokesperson at the Ethiopian Ministry of Foreign Affairs, said that the Ethiopian government is closely following ongoing investigations on the crashed aircraft. He also vowed to disclose findings of the investigation to the diplomatic community promptly.

Ethiopian Airlines disclosed earlier on Monday that both data and voice recorders on the crashed aircraft have been recovered.

The Nairobi-bound Boeing 737-8 MAX crashed Sunday near Bishoftu town, about 45 km from the Ethiopian capital Addis Ababa, just minutes after take-off from Bole International Airport, killing all 157 people on board.

"Ethiopian has continued monitoring the situation closely with all stakeholders and is providing all the necessary support to the families of the deceased in its temporarily established family assistance centers in Addis Ababa and Nairobi Airports," the airline said.

Earlier on Monday, the company also announced its decision to suspend commercial operations of all Boeing 737-8 Max aircraft.