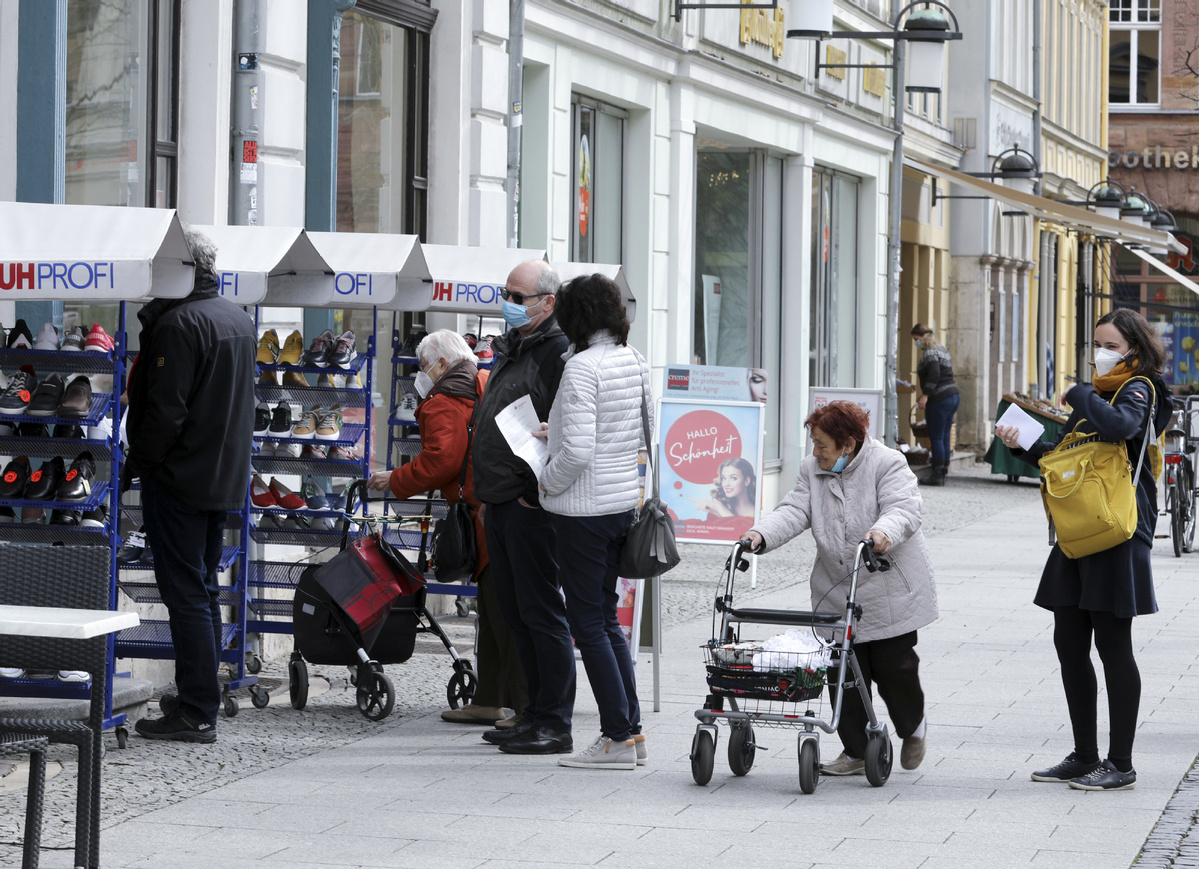 People line up in front of a shoe shop in the city centre of Weimar after being tested at a COVID-19 rapid test centre to get a day pass to visit shops and cultural institutions, as the spread of the coronavirus disease (COVID-19) continues in Weimar, Germany, on March 29, 2021. (Photo: Agencies)

Discussions will explore ways to revitalize region after virus strains

The key central bankers of Europe will have their first face-to-face meeting since before the pandemic in the German city of Frankfurt on Friday, with a wide range of measures and initiatives to revitalize the region in the coming years on the agenda.

The meeting will be an important prelude to September's presentation of a strategic review by the president of the European Central Bank, or ECB, Christine Lagarde. It is a move she announced when she took over from her predecessor Mario Draghi in November 2019, but which has so far been held up by the pandemic.

In a recent interview on the Politico website, Lagarde likened the European economy's situation coming out of the pandemic to that of a recovering patient who continues to need support.

"We have to take the economy through the pandemic and into a recovery phase, which has now started. We need to really anchor the recovery," she said.

"You don't remove the crutches from a patient unless and until the muscles have started rebuilding sufficiently so that the patient can walk on his or her own two legs. The same applies to the economy. We are at a turning point where, bearing in mind alternative variants, we are on that recovery path, heading firmly towards a return to the pre-COVID-19 level."

This will be the first such policy overhaul since 2003. The gathering will be an important opportunity to garner the opinions and standpoints on key issues among the big players.

Virtual discussions on various aspects of policy have continued during socially distanced times, but the opportunity for a mass meeting, in person, will intensify the level of debate and decision-making.

Yannis Stournaras, governor of the central bank of Greece and a member of the ECB council, told the Financial Times the meeting was "crucial for achieving the maximum possible consensus on a number of open issues. By the end of the summer, we will have agreed on a new strategy."

Policies relating to climate change are likely to play a key role; the issue will "have a space",Lagarde said, adding it would be "an indication of the fact the ECB is attentive and capable of adjusting and adapting".

Such a prioritization though would come as a surprise to some observers, as the centrality of the topic has been a source of debate. But the FT reports German central bank chief Jens Weidmann, who has long been seen as resistant to the greening of monetary policy, recently said for the first time he would support a "decarbonizing" of ECB asset purchases and related policy.

Online sessions called "ECB listens" could also become a regular fixture after they were used as a way of gathering public feeling. It highlighted a perception that policymaking is seen as far removed from ordinary everyday concerns of economic survival.

"Housing was a key point,"Lagarde told Politico. "People were also interested in what the ECB can do to help with unemployment, and what we can do with wages."

This week's meeting will be followed up by another gathering in Frankfurt at the end of July, when the ECB's governing council will have its first face-to-face meeting since March 2020.