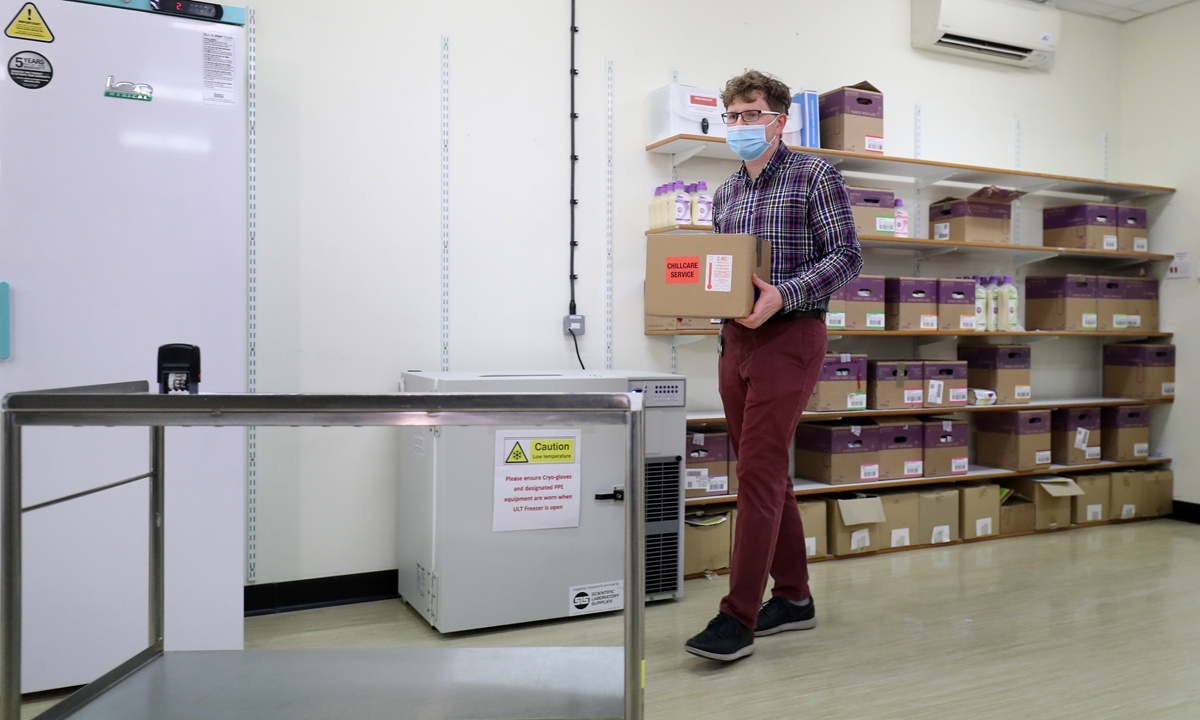 Doses of the Oxford University/AstraZeneca Covid-19 vaccine are logged by a technical officer after they arrive at the Princess Royal Hospital in Haywards Heath on January 2 in West Sussex, the UK. (Photo: VCG)

The EU's medicines regulator said Tuesday it was "firmly convinced" the benefits of AstraZeneca (AZ) vaccine outweigh potential risks, insisting there was no evidence linking it to blood clots after several nations suspended the shot over health fears.

The suspensions have provoked intense debate over whether it was prudent to put AstraZeneca inoculations on hold just as vaccination campaigns were beginning to gather pace.

Experts at both the World Health Organization and the European Medicines Agency (EMA) met Tuesday to discuss the vaccine, with the European organization expected to publish conclusions on Thursday.

While millions of doses of the vaccine developed with Oxford University have been administered, small numbers of people have developed blood clots, prompting countries including the EU's three largest nations - Germany, France and Italy - to suspend injections.

The EMA insisted that countries should continue using the vaccine.

"We are still firmly convinced that the benefits of the AstraZeneca vaccine in preventing COVID-19 with its associated risk of hospitalization and death outweigh the risk of these side effects," EMA chief Emer Cooke said Tuesday.

Cooke noted however that the regulator was "looking at adverse events associated with all vaccines."

France and Italy welcomed the news.

The preliminary statements from the EMA "are encouraging," read a joint statement from French President Emmanuel Macron and Italian Prime Minister Mario Draghi.

French Prime Minister Jean Castex vowed he would be vaccinated "very quickly" with the AstraZeneca vaccine to give the public confidence in the jab if it is ruled as safe by the EU medicines agency.

Castex also said that new restrictions could be put in place for the Paris region, such as the weekend lockdowns already imposed in the Nice and Calais regions.

"We are in a worrying and critical situation and, clearly, measures of the type that have been used in other parts of the territory are on the table," he told BFM TV in a live interview.

In Britain, which has administered more than 11 million AstraZeneca doses, experts see no evidence of more frequent blood clots among the inoculated.

One British scientist argues that the novel coronavirus itself - and not the vaccine - could be to blame.

The "very likely explanation of at least some of the clotting disorders seen are a result of COVID-19 rather than the vaccine," said Stephen Evans, professor of pharmacoepidemiology at the London School of Hygiene & Tropical Medicine.