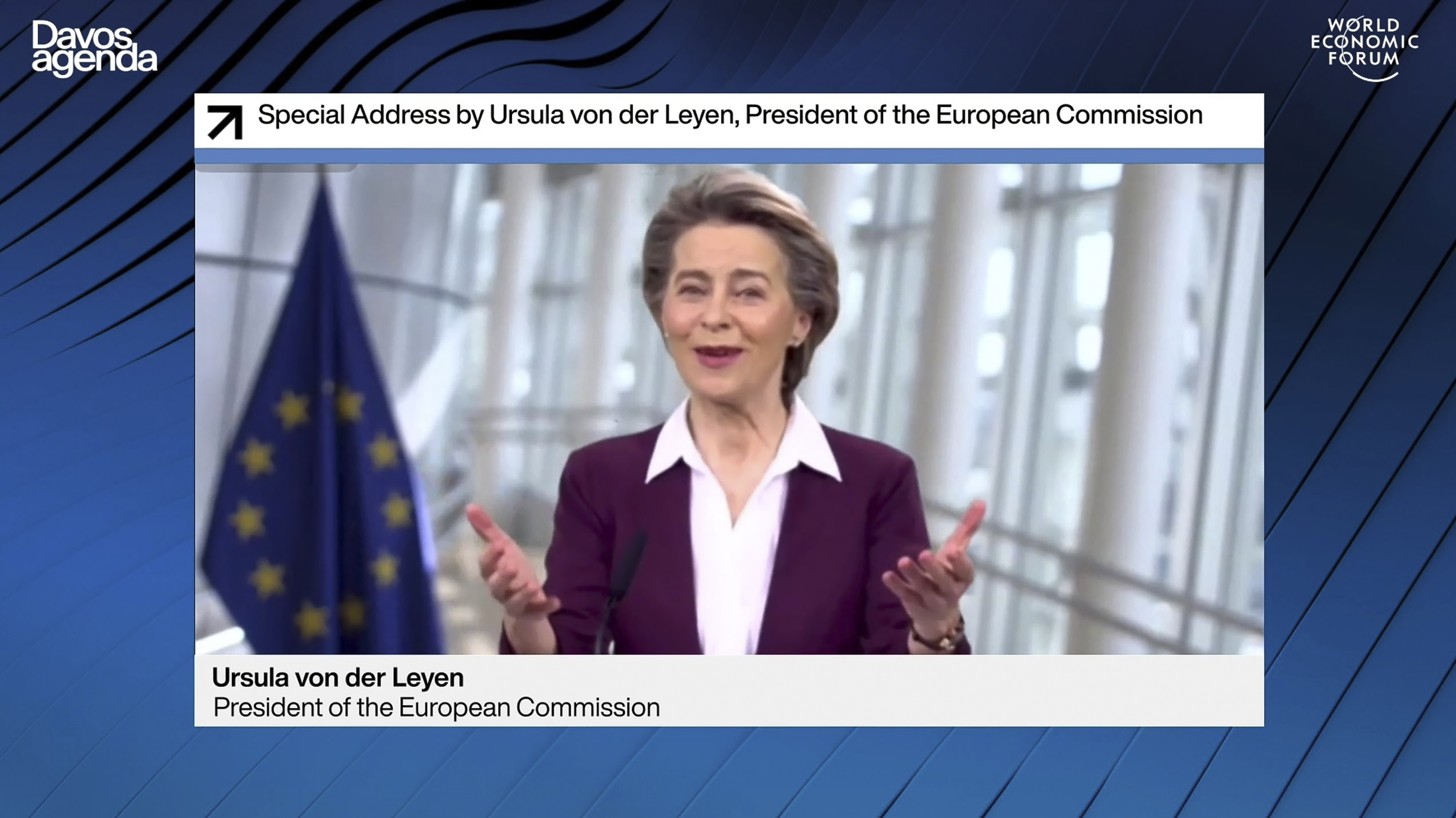 European Commission president Ursula von der Leyen has called for a global agreement on protecting biodiversity and for cooperation on regulating tech giants.

Addressing the World Economic Forum via video on Tuesday, Von der Leyen said the EU would lobby for a deal to protect biodiversity at the COP-15 United Nations biodiversity summit in Kunming, China – provisionally slated for early October – with the same scale and ambition as the Paris Climate Agreement concluded in 2015.

"This will have to be like COP21 was for climate, because we need a Paris-style agreement for biodiversity," she said.

Touching on the theme of "the great reset," Von der Leyen emphasized the need to learn from the COVID-19 crisis and pointed to the links between biodiversity loss and global pandemics.

"We have to change the way we live and do business to be able to keep what we value and hold dear," she said.

"If we don't urgently act to protect our nature, the next pandemic will be around the corner," the German politician, who was herself a trained doctor before entering politics, said.

Making her case to a wider audience, Von der Leyen also spoke of the business interests in protecting nature, saying that more than half of global GDP is dependent on high-functioning biodiversity and ecosystems.

She also reiterated the importance of the European Commission's economic recovery plan – her so-called "Green Deal" – which would boost growth, while reducing greenhouse emissions and protecting biodiversity.

Von der Leyen in her speech welcomed President Biden and the opportunities for increased cooperation he had brought, while hinting at the "damage" to democracy caused by former U.S. President Donald Trump's four years in office.

She pointed to the storming of Capitol Hill in Washington DC as an example of the dangers of social media and "the darker sides of the digital world" in spreading hate speech and misinformation.

Von der Leyen told The Davos Agenda that social media is eating away at society and advocated for greater regulation when it comes to the world's largest technology companies. She urged Biden to work with Brussels on regulating these tech giants.

"Together, we could create a digital economy rule book that is valid worldwide: from data protection and privacy to the security of critical infrastructure," she said. Adding: "A body of rules based on our values: Human rights and pluralism, inclusion and the protection of privacy."

The EU in December unveiled landmark draft legislation aimed at curbing the power of the internet giants that could shake up the way they can operate in the 27-nation bloc.

"The business model of online platforms has an impact not only on free and fair competition, but also on our democracies, our security and on the quality of our information," Von der Leyen said. "That is why we need to contain this immense power of the big digital companies," she added.

However, wading into the debate around closing Trump's social media accounts, she insisted there should be legislation governing issues of free speech online and that those choices should not be left to the tech firms.

"No matter how tempting it may have been for Twitter to switch off President Trump's account, such serious interference with freedom of expression should not be based on company rules alone," the EU chief said. "There needs to be a framework of laws for such far-reaching decisions," she explained.

In her speech, Von der Leyen also addressed the mounting tensions between her European Commission and pharmaceutical firms that have delayed COVID-19 vaccine deliveries, insisting the companies "must deliver."

"Europe invested billions to help develop the world's first COVID-19 vaccines," she said. "And now, the companies must deliver. They must honor their obligations," she added.

The Commission is demanding answers from British-Swedish group AstraZeneca and U.S. company Pfizer about delays both have announced to their deliveries to the European Union.

In a sign of concern that pharmaceutical groups might be selling the earmarked doses to higher bidders outside the bloc, it is requiring the companies to notify authorities of any exports to outside the European Union.

Von der Leyen explained, "we will set up a vaccine export transparency mechanism" to "ensure" the firms meet their contractual obligations to the EU.

The issue is sensitive for Von der Leyen, who spearheaded efforts to have the Commission procure more than 2 billion doses of potential COVID-19 vaccines for the bloc's 27 member states, home to 450 million people.

The pace of the EU roll-out has lagged the U.S., the UK and Israel, though member states including Malta, Denmark and France have started to accelerate their programs.

In her speech, Von der Leyen said the Commission's vaccine procurement was not for the EU alone but also for poorer non-EU countries that are to be supplied through a COVAX vaccination alliance co-led by the World Health Organization.

As part of a longer-term strategy to head off this and future health crises, Von der Leyen said the EU would propose a public-private entity under a new European Health Emergency Response Authority.