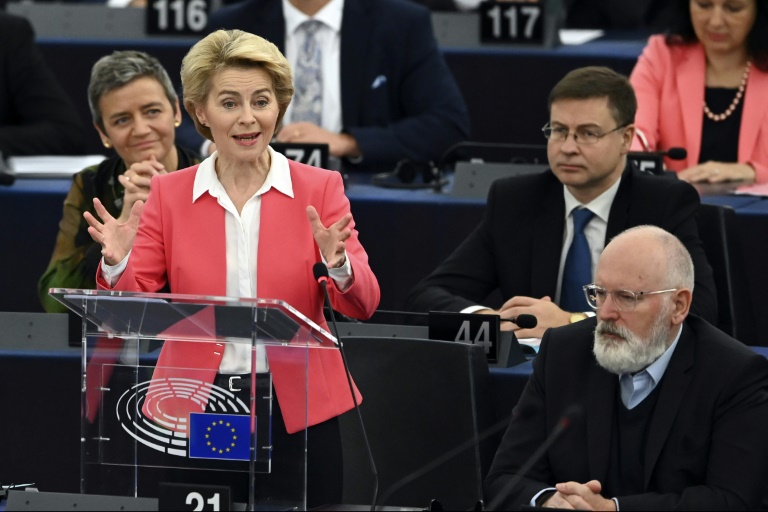 Von der Leyen urged lawmakers to approve her 27-strong commission so that she can get to work on December 1, 2019. (Photo: AFP)

Brussels' next top official Ursula von der Leyen will take office on Sunday after winning a comfortable parliamentary majority for her plan to make the EU a green superpower.

The 61-year-old conservative takes office with Europe challenged to find its new role alongside geopolitical and economic giants in the United States and China.

Her path to office, delayed from November 1, was rocky and Brussels' power has been undermined by Franco-German rivalry and Britain's imminent exit.

But on Wednesday the European Parliament in Strasbourg gave the former German defence minister a 461 to 157 vote of confidence to allow her 27-strong commission to get to work on December 1.

After a handover ceremony on Sunday, the 10th anniversary of the latest European treaty, she will head to Madrid next week for the COP 25 climate summit.

"I ask for your support to give Europe a new start," she said, in a largely well-received speech attended by the massed ranks of the new commissioners and in which she shifted fluently between English, French and German.

She hailed the Dutch vice-president that she was obliged by member states to pick as her deputy, socialist Frans Timmermans, as the right man for the dossier.

And she promised a "European green deal... for the health of our planet, our people and our economy."

As well as promising measures to combat climate change, von der Leyen insisted that Europe has the heft to lead the world in a digital economic revolution.

"We are the world's trading superpower," she boasted. "We are the largest source and destination of foreign direct investment anywhere in the world.

"We should harness this twin power of digitalisation and climate transition to boost our industrial base."

Von der Leyen's own appointment to succeed Jean-Claude Juncker as president was approved in July with only nine votes more than she needed, a narrow margin in EU politics.

And three of her initial nominees were rejected during the parliamentary confirmation process -- an unprecedented snub -- weakening her from the outset.

But the main centre-right, liberal and socialist voting blocs rallied round her in the final vote, and the Greens chose to abstain rather than vote against.

"Our priorities are a crucial part of the von der Leyen commission," said Manfred Weber, head of the parliament's centre-right EPP bloc and himself a disappointed former presidential hopeful.

"In 2024 Europe will have the most ambitious and inclusive climate policy in the world, a European border and coast guard, transformed Europol into a European FBI, a master plan to fight cancer and created millions of jobs."

The commission has members from across the political spectrum and 12 out of the 27 are women, not quite the parity that was promised but the highest number ever in the European Commission.

There will nevertheless be opposition. The parliament's eurosceptic, far-left and right-wing populist parties oppose much of her programme, and the Greens are sceptical.

And there is one more cloud hanging over the investiture: Brexit.

Prime Minister Boris Johnson plans to pull Britain out of the EU on January 31, after Brexit was repeatedly delayed amid wrangling in Westminster over the divorce terms.

But in the meantime, he has refused to fill Britain's seat on the commission and is now standing for re-election in a December 12 vote.

Von der Leyen expressed regret at Britain's decision and was markedly more conciliatory than her predecessor Juncker, who often made jokes about what he saw as London's great mistake.

"I have made no secret that I will always be a remainer. But I will also always respect the decision taken by the British people," she said.

"And whatever the future holds, the bond and the friendship between our people are unbreakable."

Von der Leyen has not been invited to observe next week's NATO summit in London, but said she continues to regard the trans-Atlantic alliance as key to Europe's security -- distancing herself from Macron.

The French leader has branded NATO "brain dead" and suggested that Europe should take arms to defend itself, but von der Leyen insisted the EU "would never be a military alliance."