Democratic standards are facing “important challenges” in some European Union countries, particularly in Hungary and Poland, where the judicial systems are under threat, the EU's executive commission said Wednesday in its first report on adherence to the rule of law. 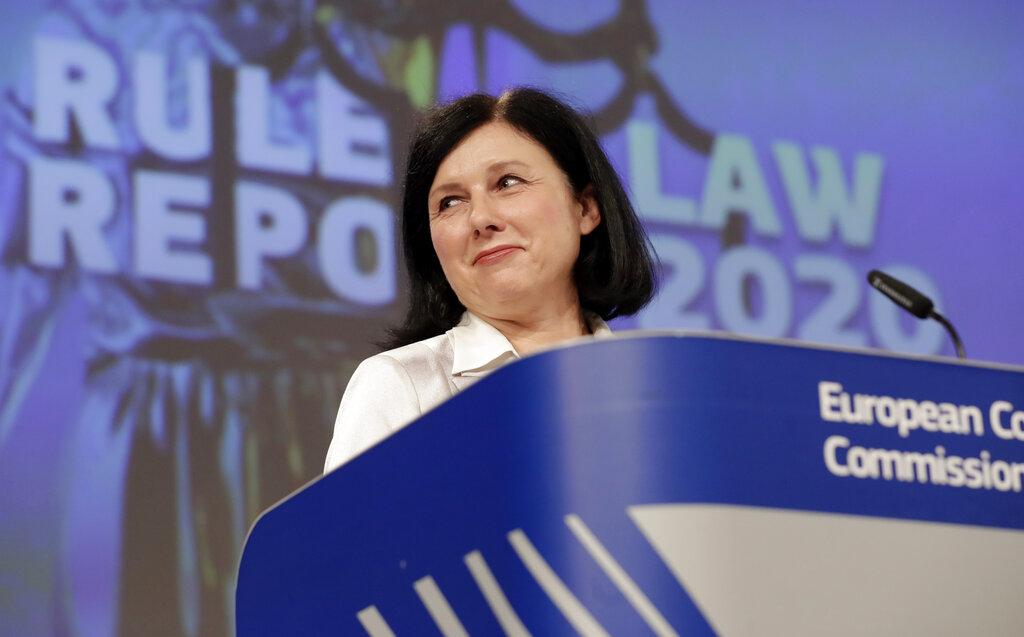 The European Commission depicted a bleak situation in the two countries. Its wide-ranging audit found that prosecution of high-level corruption in Hungary “remains very limited,” and deemed Poland deficient in the four main areas reviewed by the commission: national justice systems, anti-corruption frameworks, media freedom and checks and balances.

“It is relevant to have an overview of these issues, and see the links between them. Not least because deficiencies often merge into an undrinkable cocktail, even if the individual ingredients seem to be fine," EU Values Commissioner Vera Jourova told journalists.

The report, published a day before the leaders of the EU’s 27 nations meet in Brussels for a two-day summit, could have repercussions for ongoing discussions on the bloc’s long-term budget.

Hungary immediately dismissed the report as irrelevant and biased, saying it can’t serve as a basis for future discussions.

While EU leaders have agreed in principle on a 1.8 trillion-euro economic recovery package for the 2021-2027 budget period, they have yet to find common ground on a distribution mechanism because many countries insist the money should be linked to respecting the EU's rule of law standards.

Poland and Hungary, which believe they are being unfairly targeted, are opposed to the idea. The EU has accused the two countries of violating rule-of-law standards for several years and the bloc is pursuing sanction procedures against them.

“The rule of law and our shared values are the foundation of our societies,” European Commission President Ursula von der Leyen said Wednesday. “They are part of our common identity as Europeans. The rule of law protects people from the rule of the powerful. While we have very high rule of law standards in the EU, we also have various challenges."

Concerns in Bulgaria over judicial independence and tackling corruption cases properly were also raised in the report.

The sticking points in Poland are the right-wing government’s moves to take control of the justice system, especially the judiciary. The report says “the double role where the minister of justice is also the prosecutor general has raised particular concerns, as it increases the vulnerability to political influence.”

The story triggered Orban’s anger. In a letter to von der Leyen on Monday, he wrote that Jourova’s statements humiliated Hungary and asked for her resignation. EU officials have since offered overwhelming support to Jourova.

“As I grew up in communist Czechoslovakia, I know how it feels to live in country without the rule of law,” Jourova said. “The European Union was created also as an antidote to those authoritarian tendencies. And the European Commission has a strong role to play here.”

The commission also looked into government measures that have limited freedom during the coronavirus pandemic and noted that “reactions to the crisis showed overall strong resilience of the national systems."

The commission will next debate the report with the European Parliament and EU nations.