EU companies bullish on China after teleconference with Chinese Premier 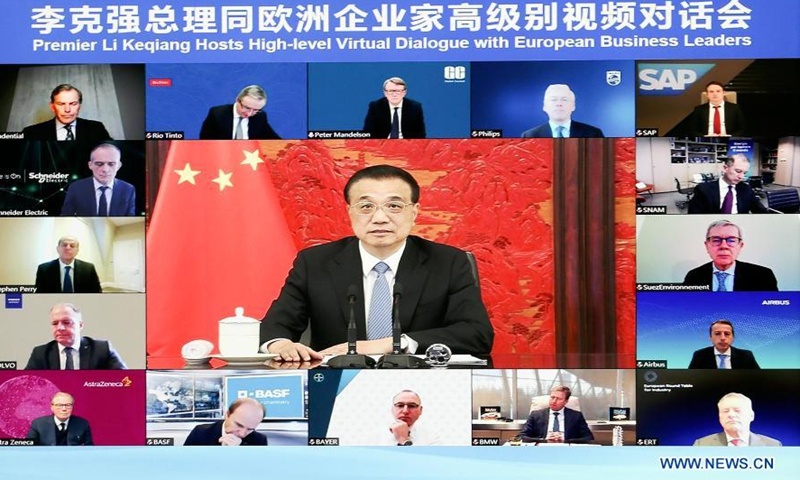 European executives who attended a teleconference with Chinese Premier Li Keqiang on Friday expressed their bullish view toward the Chinese economy on Saturday, with a positive stance on the China-EU Comprehensive Agreement on Investment (CAI) trade talks, which concluded at the end of last year.

A livestreamed Forum on New Investment Opportunities between China and the EU was held on Friday, with executives from nearly 30 leading European companies attending.

Many expressed their bullish view on the Chinese economy for 2021. A better business environment, shortened negative list, more transparency in the market, easier market access and equal treatment for all players are expected under the China-EU CAI.

Jean-Paul Agon, the chairman and CEO of L'Oréal Group, said in a statement sent to the Global Times that consumption is absolutely a key to economic recovery and China's impressive rebound sets a great example.

"We are happy to welcome the new investment agreement between China and the EU," Jean-Paul Agon said.

Such views are also shared by European companies in general.

"As a foreign-invested company standing at the connecting point of 'dual circulation,' our company looks to bring foreign experience in the setting up of Chinese standards, and promote Chinese technological standards in the world market," said Chen Hui,IKEA PLA manager. The Swedish furniture maker has over 400 suppliers in China.

"Policy support, relatively complete supply chain, strong economic performance, and strengthened confidence are all among the reasons for IKEA to continue to plough deeper into the Chinese market," Chen said.

China and the EU, on December 30, 2020, announced the completion of negotiations on the bilateral investment treaty after seven years of talks and 35 rounds of negotiations.

Merchandise trade between China and the EU in 2020 was 4.5 trillion yuan ($696.3 billion), up 5.3 percent on a yearly basis, making the EU the nation's second-largest trade partner, according to statistics of China's customs.