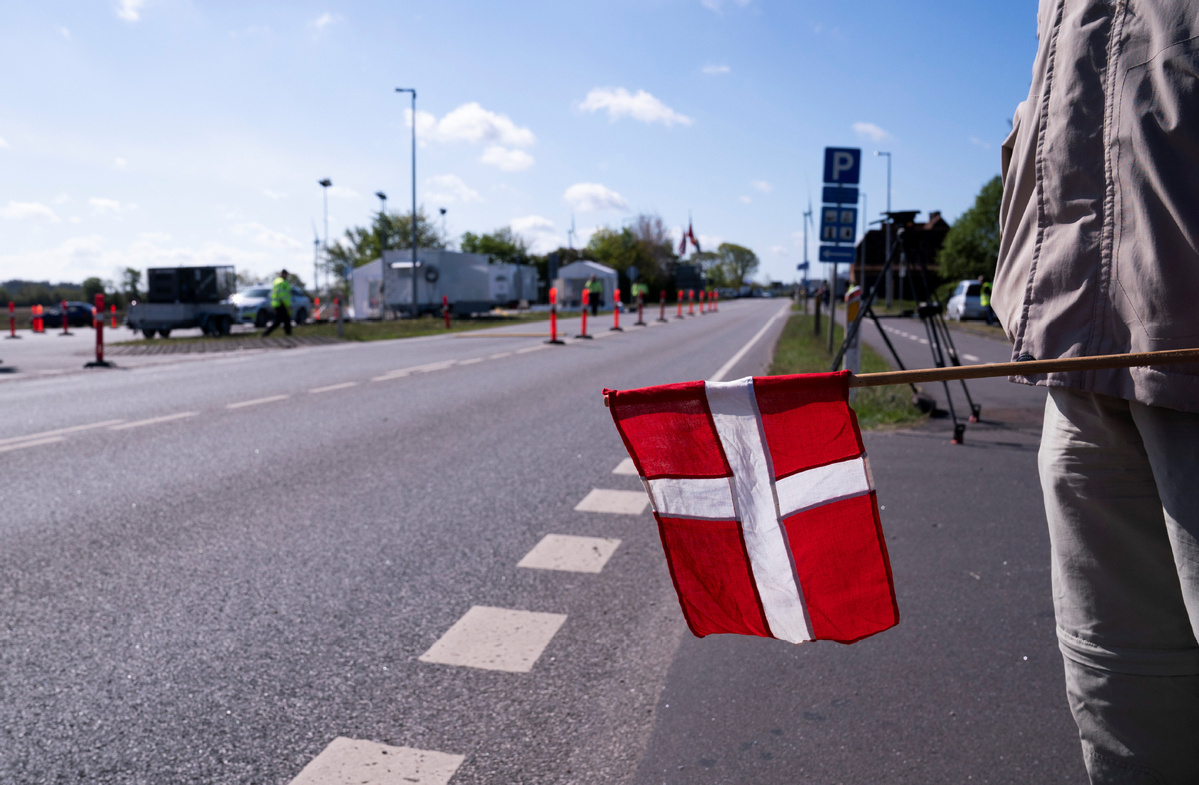 People attend a demonstration to reopen the border with Germany at the border crossing at Saed, near Toender, Denmark, May 17, 2020. [Photo/Agencies]

BEIJING -- Some European Union member states have announced new steps to reopen their borders with the improvement of the COVID-19 situation inside their countries.

German Interior Minister Horst Seehofer announced on Wednesday that Germany would on Monday lift border controls, which have been implemented for three months since the coronavirus outbreak.

Controls along Germany's land borders with Switzerland, France, Austria, and Denmark will be lifted Monday, and the government would reconsider its plans if the COVID-19 situation worsens, Seehofer said.

From Tuesday, European Union (EU) citizens and Swiss nationals can enter Germany again unhindered, without controls or quarantine regulations, according to the federal government's decision.

The decision has a few exceptions. For example, controls for foreigners arriving by plane from Spain will not end until June 21.

Danish Minister of Justice Nick Haekkerup said on Wednesday evening that the government has decided to reopen its border from Monday for residents of the northernmost German state Schleswig-Holstein without restrictions.

The government has also expanded the list of "recognizable purposes" that allow foreigners to enter Denmark.

Starting from Monday, visits to Denmark by family members, and business trips from other EU and Schengen countries as well as Britain will be allowed.

In addition, people residing in the EU and Britain who own holiday houses in Denmark or who can document that they are only being in transit in Denmark for vacation or tourism outside Denmark will also be allowed to travel in the country.

Hungary will reopen all crossings along its border with Croatia from Friday, Hungary's Minister of Foreign Affairs and Trade Peter Szijjarto said on his Facebook page on Wednesday.

Hungarians and Croatians will be allowed to cross all seven border crossings without being required to go into quarantine, according to the minister.

Poland will reopen its borders to other EU countries on Saturday, Prime Minister Mateusz Morawiecki announced on Wednesday.

The border reopening means that citizens of other EU countries can enter Poland again. Temporary passport checks, abolished in 2007 when Poland joined the Schengen area, will also be lifted.

The announcement came as the European Commission on June 5 requested member states to have their borders reopened by July 1.

International flights, which have been ceased apart from repatriation charter flights, will resume three days later, according to the announcement.