The senior official who oversees the European Union's enlargement program on Friday criticised Macedonia's president for urging citizens to boycott a vote on changing the country's official name. 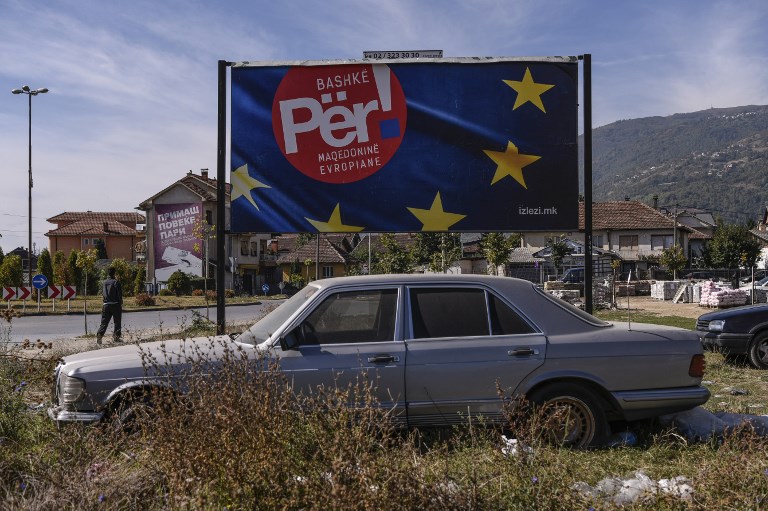 A man walks past a billboard reading in Albanian "Together for a European Macedonia" near the town of Tetovo on September 28, 2018, ahead of a referendum on wether to change the country's name to "Republic of Northern Macedonia". (Photo: AFP)

On Sunday, Macedonians will vote in a referendum to decide whether the country should be called the Republic of North Macedonia in international forums.

"I am deeply convinced that it is the obligation of political leaders to urge people to use this opportunity and not to do the opposite," EU enlargement commissioner Johannes Hahn said.

The name change would resolve a long-standing dispute with Greece, which claims the term Macedonia for its northern province, and clear the way for Skopje to join NATO and the European Union.

But many Macedonian nationalists oppose the compromise as an insult to the sovereignty of their small former Yugoslav republic, and President Gjorge Ivanov has called on voters to ignore the poll.

If turnout falls below fifty percent, opponents of the name change will claim the poll lacks credibility, and the saga could continue.

Ivanov is not a member of Macedonian Prime Minister Zoran Zaev's government, which supports the name change, and on Friday Deputy Prime Minister for European Affairs Bujar Osmani was in Brussels to discuss the next stage in Macedonia's membership bid.

After talks with Hahn, Osmani expressed optimism about the turnout and result of the referendum, saying: "The citizens understand the importance of this moment."

But Hahn criticised President Ivanov's stance, telling reporters a "boycott is not an expression of democratic majority".

On Thursday, addressing the UN General Assembly, Ivanov said Macedonians were effectively being asked to commit "historical suicide," likening the referendum to a "noose around our necks."