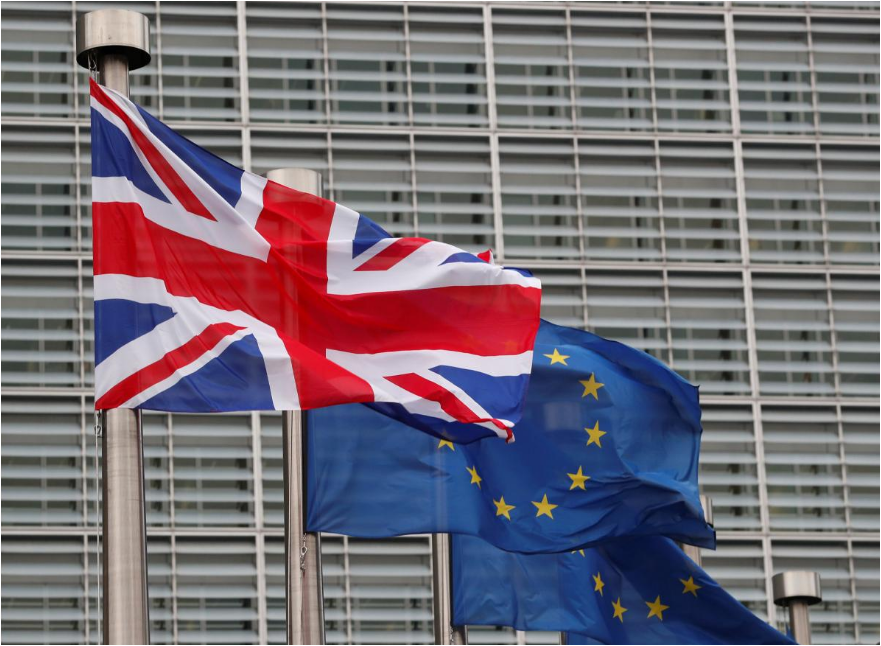 A Britain's and some European flags are hung outside the EU Commission headquarters in Brussels, Belgium December 4, 2017. (Photo: Reuters)

Britain’s post-Brexit adaptation will run through 2020, as planned, a British government spokeswoman said on Thursday as the EU dismissed London’s ideas for a longer status quo on customs and trade in a fight over the Irish border.

Both sides say they want to avoid a return of border checks on the island of Ireland after Brexit, but the European Union dismisses London’s idea to that end as unrealistic.

The EU has hence insisted on a “backstop” plan stipulating that, should no better options be agreed, it would go on governing trade after Brexit on the whole island where both EU member Ireland and Britain’s province of Northern Ireland sit.

That is, however, anathema to London, which is negotiating its divorce from a bloc it is due to exit next March. A transition period would follow until the end of 2020 and a new deal would kick in between the two from then on.

In recent efforts to make the backstop more digestible to Britain, Prime Minister Theresa May’s government has been mulling applying the EU’s external tariffs for a time-limited period beyond December 2020.

The Times newspaper reported that May would propose another transition covering customs and trade to run from 2021 until 2023 to avoid the need for infrastructure or checks on the Irish border. It will be Britain’s only land frontier with the European Union after Brexit.

Irish Prime Minister Leo Varadkar, behind whom the other 26 leaders of the remaining EU states have rallied, said Dublin could not agree to a time-limited solution.

“Well 2023 won’t do. The Irish government won’t be able to agree to a situation where we put off a fundamental decision like that,” he told Ireland’s Newstalk radio station.

“The whole purpose of having the backstop is that that’s a guarantee that is there in perpetuity and just kicking the can down the road on the basis that maybe we can come up with some sort of legal or technological solutions that don’t exist now, that’s not something we could accept.”

He was firmly backed by a senior EU official who deals with Brexit talks that the bloc’s executive European Commission is leading with London and spoke to reporters in Brussels on Thursday after the last negotiating round between the two sides.

“We pointed out that what they seem to be discussing will not address the issues linked to the border and that of course a backstop that would be strictly time-limited would defeat the purpose of a backstop,” the person said.

The EU and Dublin insist the Brexit treaty must lock in the backstop in case a future trade pact does not remove the need for border controls. London signed up for this last month but disagrees with the EU’s means of achieving it.

May’s spokeswoman said the government intends to be ready with new customs arrangements by the end of the transition period, despite a parliamentary report also saying that Britain may have to stay in the customs union.

In Brussels, EU Industry Commissioner Elzbieta Bienkowska urged London to give “at least some kind of predictability” for the period after it leaves the bloc next year.

“From the very beginning of these negotiations, it has been visible that it’s not the European Union that is delaying this process. We are quite well prepared for this,” she said.

The EU and Britain had been hoping to mark another milestone in the Brexit negotiations schedule during a meeting of all EU leaders in Brussels in a month. That would be aimed at agreeing the Brexit formula this autumn.

Without agreeing on Ireland, the EU threatens to deny Britain any post-Brexit transition, meaning it would crash out from one day to another in March, 2019, with little clarity on what rules apply to people and businesses afterwards.

But the bloc has been sounding increasing alarm about slow progress and what it sees as London’s unrealistic stance on many issues, with the senior EU official deriding on Thursday Britain’s “fantasy” gambit on Brexit.