European Union leaders stood divided Tuesday over who to name to the bloc's top jobs, after elections shredded comfortable old political alliances and raised troubling questions about the future of the European project. 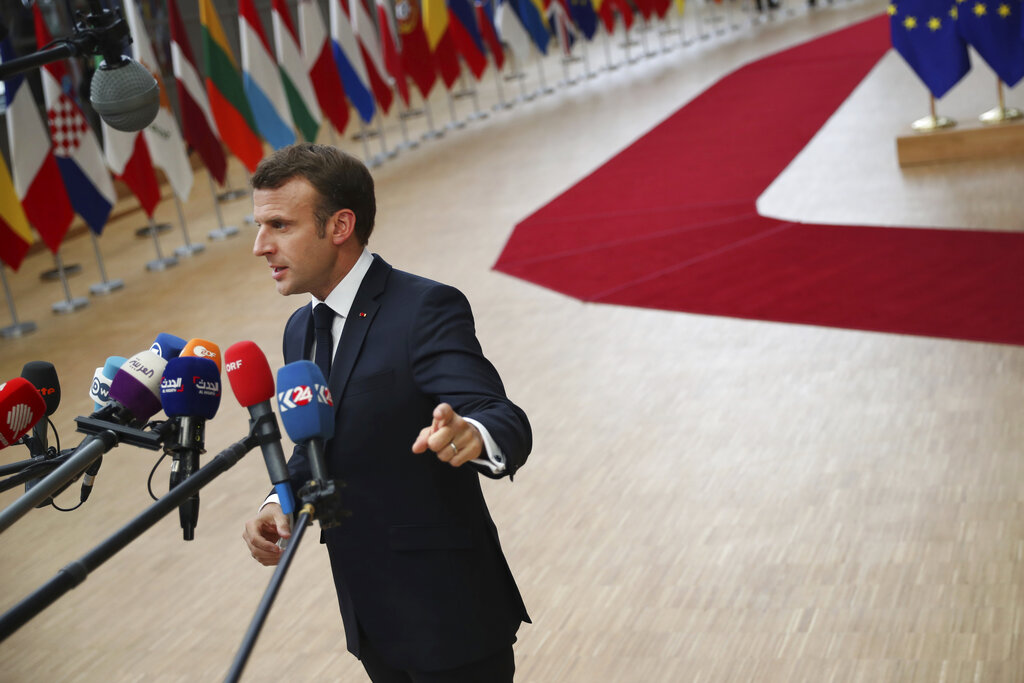 French President Emmanuel Macron speaks with the media as she arrives for an EU summit in Brussels, Tuesday, May 28, 2019. (Photo: AP)

At a summit in Brussels, major powers France, Germany and Spain all differed over who is best suited to lead the EU's powerful executive arm, the European Commission, for the next five years. Former Luxembourg Premier Jean-Claude Juncker heads the commission, which proposes EU laws and ensures they are respected, until Oct. 31.

After voters turned out for last week's European Parliament elections in numbers not seen in 20 years, the leaders want to show they can respond quickly to people's concerns. The aim is to name all four top jobs — the commission chief, a replacement for Donald Tusk as European Council president, a new foreign policy chief and head of the European Central Bank — at a summit June 21-22.

Avoiding any mention of the differences or candidate names, Tusk said the leaders hope "we can provide clarity on all these posts already in June," but he said that "this depends not only my good will but also on the good will of everyone involved."

French President Emmanuel Macron, whose party is joining forces with a new pro-business liberal group in the EU parliament for the first time, insisted the choices should represent the new political project that European voters are demanding.

"The new order means one thing: It's that we cannot just repeat the old habits," Macron told reporters.

"It is important to me that these nominations have parity, that we have two men and two women. It is important for me to have the best profiles possible," he said, noting that there must "be balance in terms of political leanings and in terms of geography."

Other leaders, too, said the aim is to have two women in top posts.

The conservative European People's party, which has been the largest group in the assembly, and the Socialists and Democrats have held a majority in the body for 40 years. But voters concerned about climate change, migration or security turned instead to the Greens, the pro-business ALDE group or far-right parties.

As a result, it is unclear what workable majority will emerge in the assembly, which sits in Brussels and Strasbourg, France, when lawmakers gather in July, especially as the leaders and party groups jockey for position.

Still, German Chancellor Angela Merkel described the summit as "good and harmonious," even though Macron virtually ruled out the prospect of her favorite, Manfred Weber, replacing Juncker. He suggested that the former Bavarian lawmaker lacked solid experience.

Weber has never served in government or at a major institution like the European Commission. He has led the European People's Party since 2014, but the group suffered major losses at the polls.

Macron said Denmark's Margrethe Vestager, who is now the EU's competition commissioner, would be a suitable replacement as would Michel Barnier, the Frenchman who has led the EU's Brexit negotiations with the United Kingdom. Getting Barnier to head the commission would mark a fillip for Macron following the strong showing of the French far-right in Sunday's elections.

"We will support Frans," Sanchez said. "He has the experience not only at the national level but also at the European level to lead the commission."

After Tuesday's summit it appeared clear the process will take some time, amid signs of a power struggle between the EU Council, which represents national governments, and the parliament.

No clear candidate for Juncker's post emerged from a meeting Tuesday morning among party group leaders at the parliament, whose members must endorse the new commission president.

Instead, they insisted only that the person be chosen from among the candidates put forward by the parliamentary blocs. This puts them at odds with Macron, who wants EU leaders to decide who will head the commission.