BRUSSELS, Feb. 19 (Xinhua) -- The European Union (EU) announced on Friday to double its contribution to COVAX, an international program devised to help low and middle-income countries to have more access to COVID-19 vaccines. 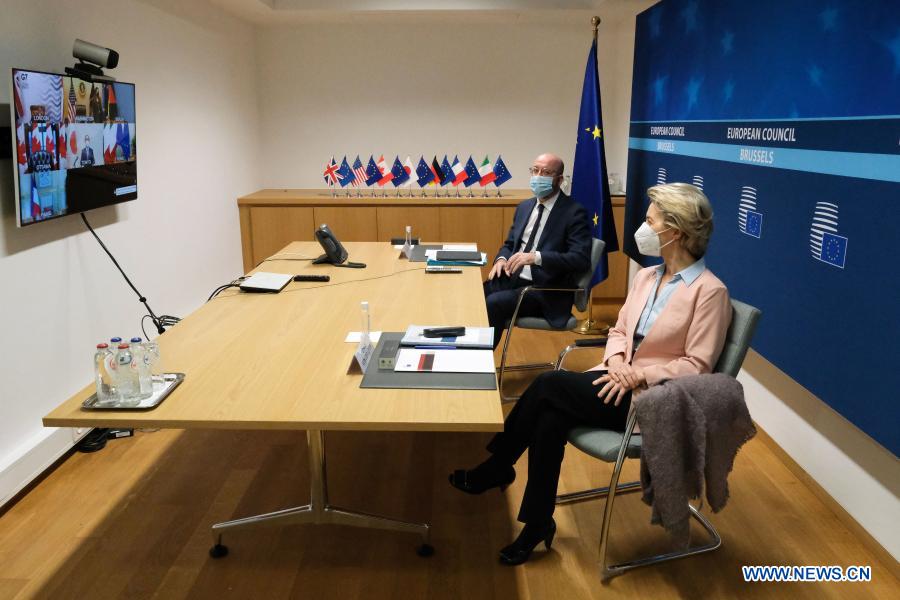 European Council President Charles Michel (L) and European Commission President Ursula von der Leyen are seen for a virtual meeting of the leaders of the Group of Seven in Brussels, Belgium, on Feb. 19, 2021. (Photo: Xinhua)

European Commission chief Ursula von der Leyen told the G7 leaders' virtual summit that the bloc was pledging an additional 500 million euros (about $606 million), bringing its contribution to the global initiative to one billion euros.

The new pledge brings closer COVAX's target to deliver 1.3 billion doses for 92 low and middle-income countries by the end of 2021, the EU said in a statement.

Europe is one of the leading contributors to COVAX with over 2.2 billion euros, including 900 million pledged by Germany on Friday.

"Last year, as part of our Coronavirus Global Response, we committed to ensuring universal access to vaccines everywhere on Earth, for everyone who would need them. COVAX is best placed to help us reach this goal," von der Leyen said. "We will only be safe if the whole world is safe."

To date, a total of 191 countries have participated in the COVAX facility, 92 of them low and middle-income economies eligible to get access to COVID-19 vaccines through Gavi COVAX Advance Market Commitment. Most of these are in Africa.

Gavi, the Vaccine Alliance, is a global health partnership of public and private sector organizations dedicated to "immunization for all."

On Wednesday, UN Secretary-General Antonio Guterres proposed that the Group of 20 (G20) set up an emergency task force to prepare a "Global Vaccination Plan" against COVID-19.

"We have come together to create the COVAX facility... But we must do even more. Our efforts need to be comprehensive and well-coordinated everywhere," Guterres told an open debate of the UN Security Council on "ensuring the equitable access to COVID-19 vaccines in contexts affected by conflict and insecurity."

He said the new task force should include all countries in which there is a capacity to develop vaccines or to produce them if licenses are available, together with the World Health Organization (WHO) and Gavi, other relevant technical organizations and international financial institutions.

According to information released by WHO on Friday, 251 candidate vaccines are still being developed worldwide -- 70 of them in clinical trials -- in countries including Germany, China, Russia, Britain, and the United States.