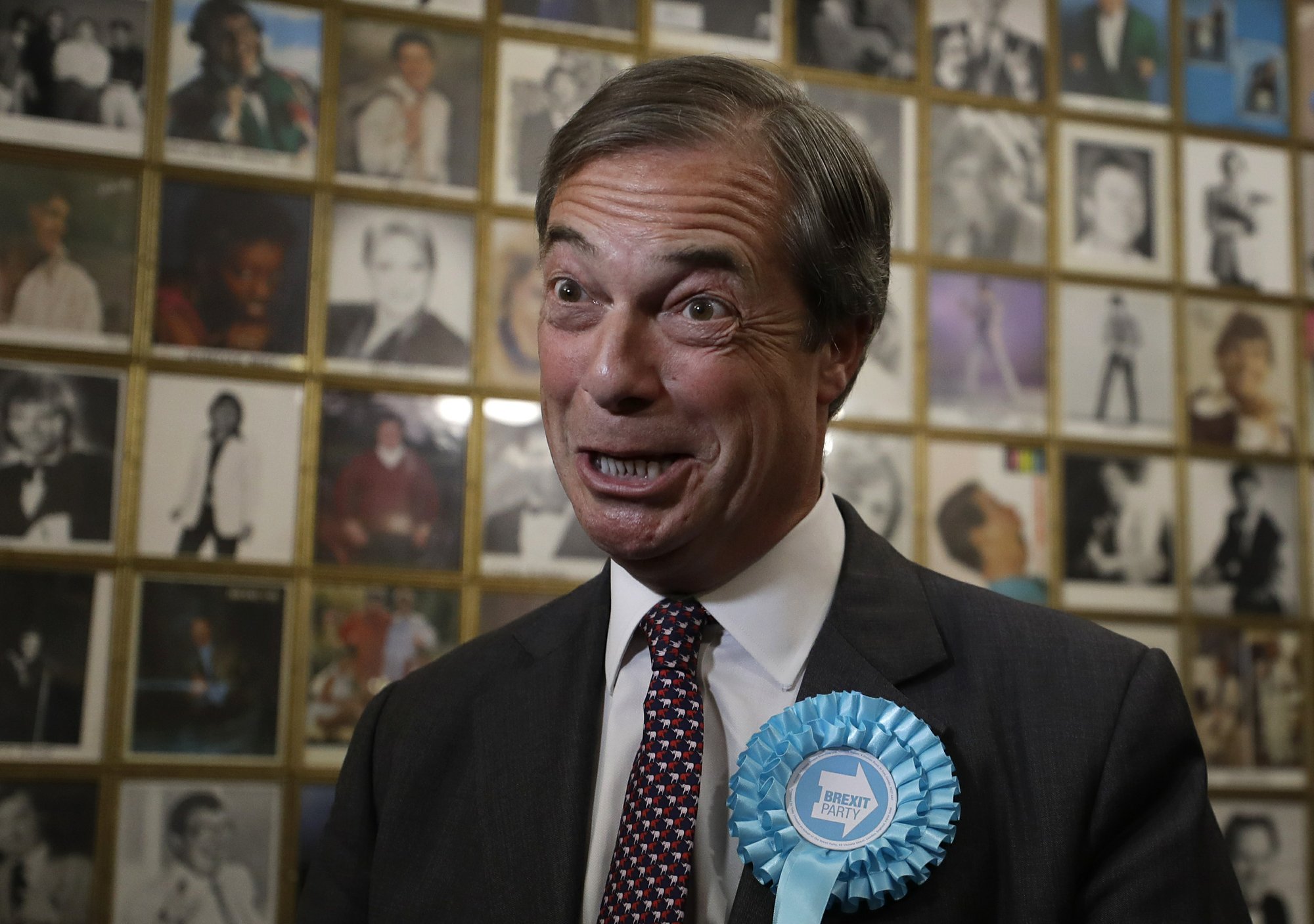 British Politician Nigel Farage speaks during an interview ahead of a Brexit Party rally at Lakeside Country Club in Frimley Green in Surrey, England, Sunday, May 19, 2019. (Photo: AP)

No one in Britain is more enthusiastic about this week’s European Union elections than people who hate the EU.

Hard-core Brexit supporters have become increasingly eager to cast ballots for Nigel Farage’s newly formed Brexit Party, whose sole policy is to leave the EU as soon as possible. They’re attending rallies in their thousands to chant “Ni-gel! Ni-gel!” and denounce what they call the betrayal of their referendum vote to leave the bloc. Three years after that decision, political gridlock in Parliament means the UK is still not out the exit door.

The five-yearly elections to the European Parliament are generally sleepy affairs in Britain; only about a third of the electorate bothered to vote in 2014. But Brexit has made Thursday’s vote an emotionally charged showdown with high stakes for Prime Minister Theresa May’s Conservative government.

“There is a momentum, an energy behind the Brexit Party,” a beaming Farage told The Associated Press before addressing more than 1,000 supporters at a rally in Frimley Green, a commuter-belt village 30 miles (50 kilometers) southwest of London. “There are millions of people out there asking a question: What kind of country are we if we turn our backs on a democratic result?”

If things had gone to plan, this election — being held across the 28 EU countries between Thursday and Sunday — wouldn’t be taking place in Britain, which was due to have left the bloc on March 29. But with departure postponed, potentially until Oct. 31, Britain must elect its 73 representatives, even though they may only serve briefly in the 751-seat EU legislature, which has a wide array of budgetary and scrutiny powers.

Opinion polls suggest Farage’s Brexit Party could pick up as much as a third of the vote in an election many see as proxy Brexit referendum, with many defecting from May’s deeply divided Conservative Party.

The pro-EU Liberal Democrats and the Greens are also seeing big surges, largely at the expense of the main opposition Labour Party, which is divided over whether to support a second referendumfor Brexit.

Arguably the UK’s best-known Brexiteer, Farage is a longtime thorn in the side of the EU, a prominent UK fan of President Donald Trump and a hate figure for liberal and pro-European Britons. On Monday, Farage became the latest right-wing British candidate to be splattered with a milkshake while campaigning.

He helped lead the “leave” campaign in Britain’s 2016 EU referendum using messages that have been accused of racism — one billboard showed a line of migrants under the slogan “breaking point.” Electoral authorities have since investigated the funding of Farage’s Leave.EU campaign and fined it for breaking campaign spending laws.

After the referendum Farage quit as leader of the UK Independence Party, which later lurched to the anti-Islam far right. He launched his new party last month to harness the anger and frustration felt by many Brexit-backers over the impasse in Parliament.

Farage says more than 100,000 people have paid 25 pounds ($32) to become registered supporters. Election regulators are investigating the party’s finances after claims it broke the rules by accepting donations from overseas.

In Frimley Green, the largely white, middle-aged crowd — packed into a 1970s leisure center that usually holds darts tournaments — roared as Farage condemned the “betrayal” of Brexit and May’s “shameful” deal with the EU.

Farage, 55, has sat in the European Parliament for two decades and run unsuccessfully for Britain’s Parliament seven times, but the crowd lapped up his tirades against the “career political class.”

“He’s the only one who speaks for us,” said Kerry Hawkins, wearing a “team Nige” T-shirt with Farage’s face plastered on it.

The Brexit Party wants to rip up the divorce agreement agreed between May and the bloc — and three times rejected by Parliament — and leave without a deal on future trade terms. Most businesses and economists think that would cause economic turmoil and plunge Britain into recession. But Farage supporters deride such warnings as “Project Fear.”

“We got through two world wars as a sovereign nation,” said retiree Peter Harrison. Invocations of the wartime Blitz spirit crop up frequently in the Brexiteer lexicon.

Pro-EU voters, who tend to be younger and more urban, are also eager to send a message on Thursday, but must choose among several parties promising the chance to stop Brexit. The centrist Liberal Democrats, who support a second referendum on Britain’s EU membership, have seen their poll ratings soar.

The environmentalist Greens are surging in opinion polls. Also on the ballot paper is Change UK, formed earlier this year by 11 lawmakers who quit the Conservatives and Labour.

Change UK is struggling to make a breakthrough and has been accused of splitting the pro-EU vote — a claim rejected by lawmaker and party spokesman Chuka Umunna.

“There are lots of people who won’t vote for other parties, that want a people’s vote to remain in the European Union, who will vote for us,” he told the BBC.

The plethora of parties may just be a reflection of a splintering political system in which the power of the long-dominant Conservative and Labour parties is waning.

Farage’s ambitious aim is the destruction of Britain’s two-party system in favor of a new political alignment — with himself as kingmaker.

“There is a possibility that the two main parties could do so badly in this election that people begin to question their fundamental loyalties,” said Tim Bale, professor of politics at Queen Mary University of London.

“It could be that Britain is actually on the way to a much more fragmented, much more volatile kind of party system.”

For some, that can’t come a minute too soon.

“I think we’re on the verge of something that could be quite historic,” said Mark Bowles, a residential building manager standing in line to hear Farage speak. “For the first time in my lifetime it could be that the two major parties don’t decide what’s going to happen.

“And I think most people would agree, from whatever background, some kind of difference is needed. We can’t carry on as we are.”