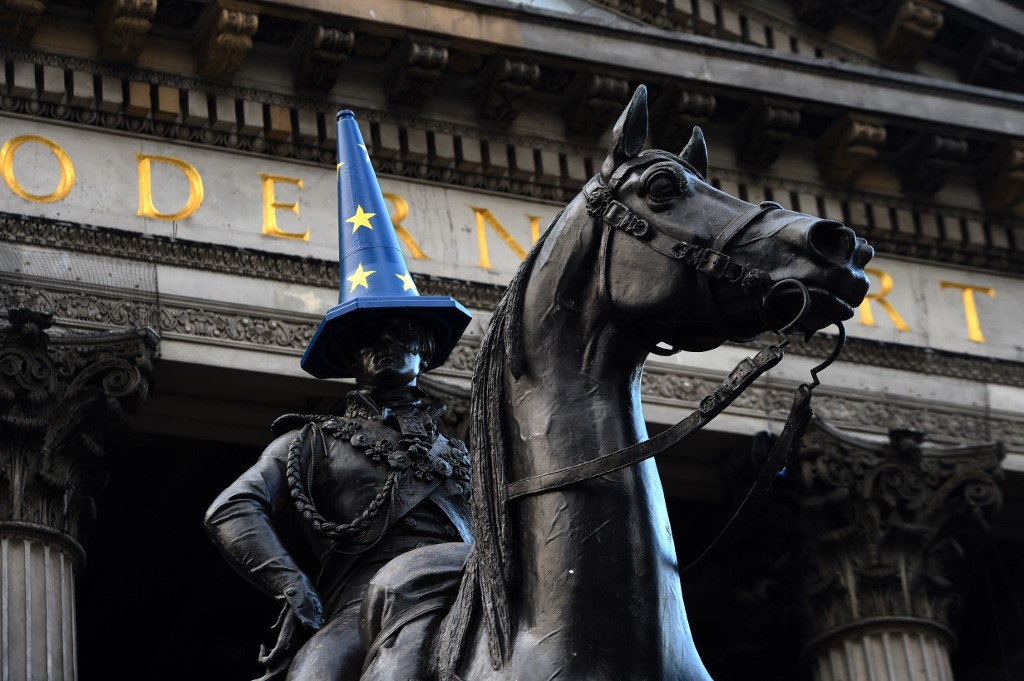 A traffic cone painted in the colours of the EU flag perches atop the head of a statue of the Duke of Wellington outside the Gallery of Modern Art in Glasgow on February 1, 2020. (File photo: AFP)

Establishing the foundation for new ties with Britain is the next chapter in the Brexit saga, with signs pointing to several months of acrimonious talks between London and Brussels with the outcome highly uncertain.

Britain left the European Union on January 31, but entered a transition phase until the end of the year to give time to hammer out a new basis for relations on trade, security and defence.

But there are doubts the two sides will bridge their differences in that time, with French President Emmanuel Macron warning at the weekend he was "not sure" a deal would be struck by the end of December.

Trade will be the biggest flashpoint, with the remaining 27 EU countries especially nervous that Britain will backslide on standards to win a competitive edge against European businesses.

Fishing is also a hot-button issue, with France leading a small group of countries demanding that European vessels maintain open access to British waters that are particularly rich in fish stocks.

The EU envoys meet at around 1400 GMT and if they find common ground, the matter will then go to a meeting of European affairs ministers on Tuesday, whose final green light would open the way for talks with the UK to start on March 2.

Recent days have shown that tetchy talks lie ahead, with Britain insisting it is no longer chasing a deep partnership with Europe that would require matching EU rules on health, labour standards, environment and other matters.

Instead, Prime Minister Boris Johnson is asking for a simplified deal similar to those the EU has struck with Canada, Japan and South Korea that reduce tariff barriers to near zero, but which have less strict controls on standards.

Bringing that point home to Europe, in a speech in Brussels last week, Britain's chief Brexit negotiator David Frost said his government's desire to throw off EU regulations was not just a negotiating position but "the point of the whole (Brexit) project".

"We must have the ability to set laws that suit us -- to claim the right that every other non-EU country in the world has," Frost said.

Even a "no deal", with its heavy implications for the economy, does not seem to frighten London, casting deep uncertainty in the forthcoming negotiations of barely 10 three-week rounds of talks.

The European side is annoyed and to some measure suspicious of the change of heart, especially since British Prime Minister signed a political declaration in October that called for an ambitious partnership.

The negotiating mandate under consideration was first proposed by the EU's chief negotiator Michel Barnier with bloc member states inserting their changes over the past few weeks.

In drafts seen by AFP, language on fishing and on upholding norms -- known as maintaining the "level playing field" -- have been toughened up, which EU sources said came at the insistence of Paris.

Some member states have added language on issues close to them, including a call that Britain must "return unlawfully removed cultural objects to their country of origin", a problem dear to Greece, Italy and Cyprus.

Stefaan de Rynck, a senior adviser to Barnier, warned last week that the next few months of talks could be even tougher than the divorce negotiations that formally ended Britain's 47-year membership of the EU.

"We expect some of the negotiations to be rather difficult, perhaps more difficult than during the withdrawal," de Rynck told an audience at the London School of Economics.

French Foreign Minister Jean-Yves Le Drian put it even more vivdly, predicting the two sides would "rip each other apart".

London has until the end of June to ask for a deadline extension should the talks fail to make any headway in the coming months.

But Johnson has ruled out asking for more time, a stance that raises the prospects of a "no deal" or only a bare-bones deal which could also bring major disruption.