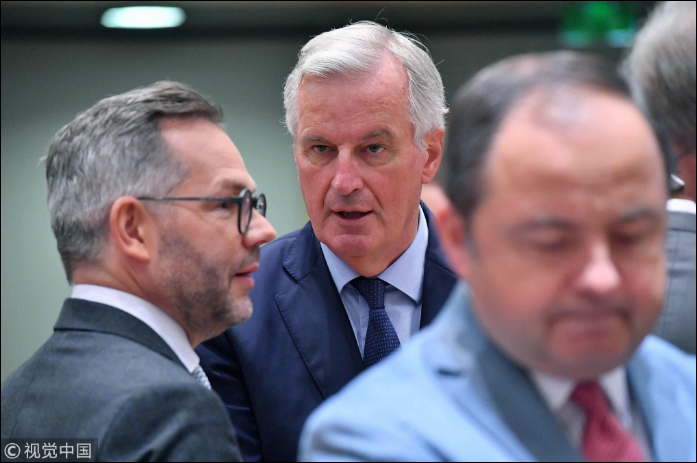 Chief EU negotiator for Brexit Michel Barnier (C) talks with German minister of state for Europe Michael Roth (L) prior to a General Affairs council on article 50 at the European Council in Brussels, July 19, 2018. (Photo: VCG)

Barnier, who met new UK Brexit minister Dominic Raab on Thursday, also reminded Britain there could be no progress on future relations until all elements of its exit were tied up – notably ensuring no hard border between Ireland and Northern Ireland.

Meanwhile, Germany's Europe Minister Michael Roth (SPD) also told the public broadcaster ZDF on Friday that the German government is not convinced by British proposals for a new relationship between the EU and Britain after the country leaves the bloc .

Speaking to ZDF, Roth warned that the German government had serious doubts about the feasibility of bilateral arrangements outlined in a Brexit White Paper which was recently unveiled by British Prime Minister Theresa May. "We still have many, many questions," Roth said.

“As I told the ministers, there are several elements in this white paper that open the way to a constructive discussion regarding the political declaration on our future relationship,” Barnier told a news conference in Brussels following a meeting of EU ministers.

However, he added that he had put many questions to Britain, asking whether the proposals were workable and if they would create more red tape.

“I would simply say that Brexit cannot be and will not be a justification for creating more bureaucracy,” he said.

Barnier noted that there were only 13 weeks until EU leaders meet for a summit, by when the European Union and Britain should have finalized a withdrawal agreement.

Barnier said that 80 percent of that agreement was already in place, but that there was still no agreement on how to avoid a hard Irish border after Britain leaves the bloc.

“This requires a legally operative backstop, an all-weather insurance policy, to address the issues of Ireland and Northern Ireland. All 27 member states insist on this,” he said.

British Prime Minister Theresa May said in a speech on Friday she accepted that a hard Irish border was “almost inconceivable,” but dismissed the EU’s current plan as “unworkable.”

Barnier said he had invited British negotiators to work on the backstop issue next week.

May also called on Brussels to respond quickly to her white paper plan to avoid a damaging no-deal Brexit.

The German Europe minister was unwilling to predict on Friday whether a so-called "Hard Brexit," in which Britain leaves both the EU single market and customs union, could still be averted. In any case, he noted, the EU and the United Kingdom would both always be "worse off" compared to the status quo.

Roth described Brexit as a "tragedy" in which Germany and its fellow EU member states could only attempt to limit the resulting damage as much as possible.

"Our key priorities are the unity of the remaining 27 EU members, the integrity of the single market and that we can continue to cooperate with the United Kingdom as closely as possible," he told ZDF.

The SPD politician further highlighted that Berlin would resist any attempt by the United Kingdom to engage in regulatory "cherry-picking" which diluted the EU's four founding freedoms for the movement of people, goods, services and capital across the bloc.

In a recent report, the Federation of German Industries (BDI) warned that while Brexit would harm the EU as a whole, the United Kingdom would itself be most affected by its adverse economic impact.

The country has been the worst performing economy in the EU in terms of gross domestic product (GDP) growth since voting to quit the bloc in 2016 and has since seen a steep drop in foreign direct investment (FDI).

EU officials are meeting in Brussels in the course of Friday to discuss potential solutions to the current impasse.