The European Union is facing further shortfalls in its coronavirus inoculation programme after pharmaceutical giant AstraZeneca said production problems and export restrictions would reduce planned deliveries of its vaccine. 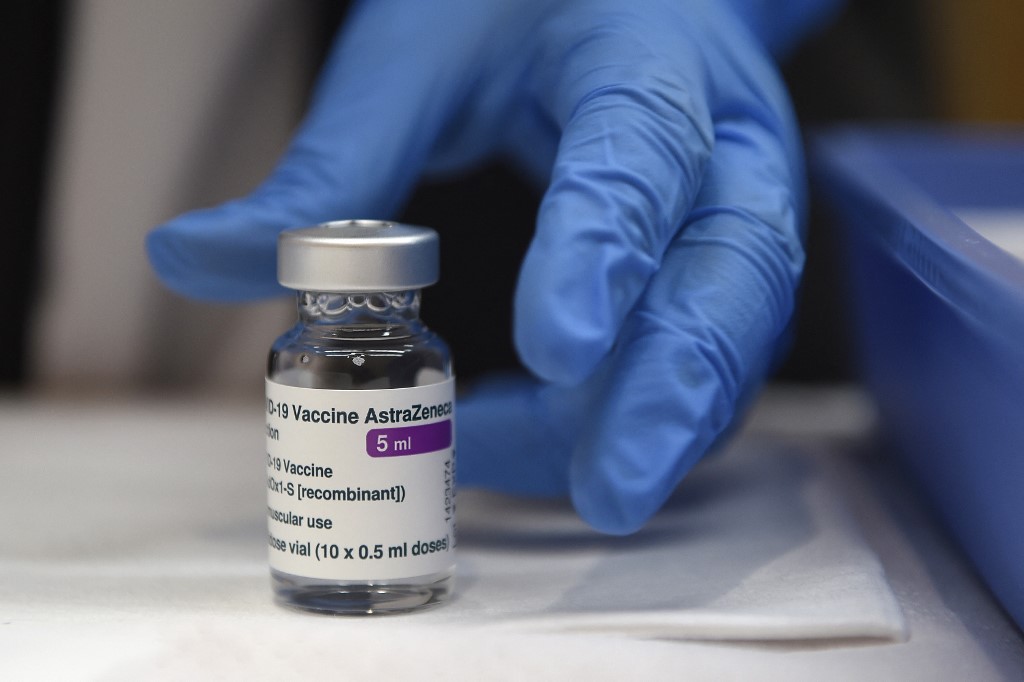 A nurse picks up a bottle of the AstraZeneca Covid-19 vaccine during a mass vaccination campaign for people between ages of 50 to 55 in Vigo, northwestern Spain, on March 13, 2021. (Photo: AFP)

The Anglo/Swedish firm's image has already taken a hit with several countries suspending the rollout of its vaccine over blood clot fears, even as the World Health Organization said there was no reason to stop using it.

It is just the latest blow for the AstraZeneca vaccine, which is the cheapest vaccine aimed at fighting back against a pandemic that has claimed more than 2.6 million lives worldwide.

Germany has already reported adverse effects due to the delay, the state of Thuringia cancelling appointments and suspending a pilot project for general practitioners to administer the vaccine.

Despite the worrying signs, thousands joined protests in German cities on Saturday against anti-Covid measures.

French Prime Minister Jean Castex said his government still expected to exceed its target of 10 million vaccinated by April 15, though he said some labs were not respecting delivery deadlines.

Castex defended the use of the AstraZeneca vaccine despite precautions taken by other nations.

"I would not allow myself to send poison to my fellow citizens," he said during a visit to a vaccination centre.

He also did not rule out a new lockdown in the Ile-de-France region, which is home to the capital Paris, saying he was ready to take "additional measures" if necessary.

"We are on a razor's edge," he told Le Monde newspaper, as the first three intensive care patients were moved from Ile-de-France to nearby regions on Saturday to relieve the pressure on overwhelmed hospitals in the capital.

The United States, the country hit hardest by the pandemic, has ramped up its vaccination programme after a shaky start.

The Centers for Disease Control and Prevention said 100 million doses had been administered so far, just less than a third of the total given worldwide so far.

Tunisia and Ethiopia both launched vaccination campaigns on Saturday, with Ethiopian officials flagging an alarming rise in cases.

There was outrage in Jordan after at least seven Covid-19 patients died on Saturday when a hospital ran out of oxygen.

"I have submitted my resignation to the prime minister," said health minister Nazir Obeidat, adding that he took "full moral responsibility" for what happened.

Several countries suspended the use of AstraZeneca's vaccine this week, with Norway reporting an "unexpected death from a brain haemorrhage" after receiving the shot.

Norwegian officials added on Saturday that the country had "received several adverse event reports about younger vaccinated people with bleeding under the skin" after getting the shot.

It also said it had received "three more reports of severe cases of blood clots or brain haemorrhages in younger people who have received the AstraZeneca vaccine".

The World Health Organization, which said its vaccines advisory committee was examining the safety data coming in, has stressed that no causal link has been established between the AstraZeneca vaccine and blood clotting.

"Yes, we should continue using the AstraZeneca vaccine," WHO spokeswoman Margaret Harris said Friday, stressing that any concerns over safety must be investigated.

AstraZeneca insisted its jab was safe, adding there was "no evidence" of higher blood clot risks.

Italy and Austria have banned the use of jabs from separate batches of AstraZeneca and Thailand and Bulgaria said this week they would delay their rollout.

Austria, the Czech Republic, Slovenia, Bulgaria and Latvia meanwhile called for EU talks to discuss "huge disparities" in vaccine distribution, according to a letter published on Saturday.

"If this system were to carry on, it would continue creating and exacerbating huge disparities among member states by this summer, whereby some would be able to reach herd immunity in a few weeks while others would lag far behind," the letter said.

Italy on Friday announced tough new restrictions, with schools, restaurants, shops and museums were ordered to close across most regions of Italy, including Rome and Milan from next week.