EU fears offer to US 'not enough' to end trade row 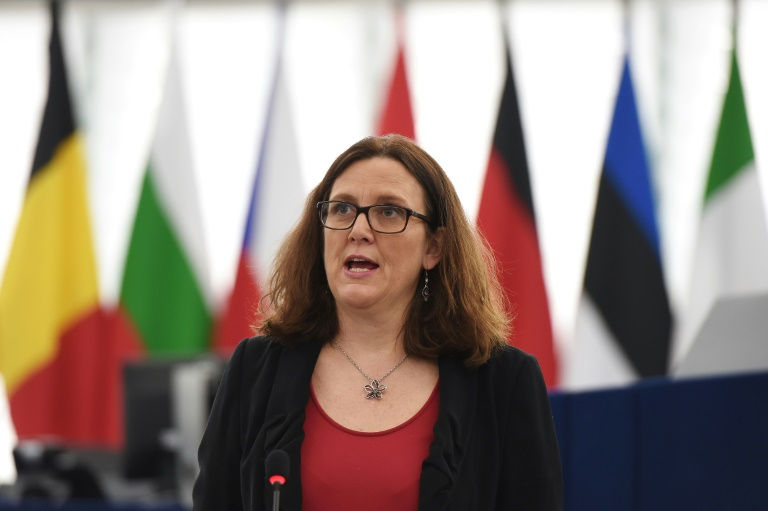 EU Trade Commissioner Cecilia Malmstrom does not think Europe's offer to the US will be enough to stave off the threat of a trade war.(Photo: AFP)

The EU's top trade official warned Tuesday that the bloc's last-ditch bid to persuade US President Donald Trump to back off from stiff tariffs on metals imports from Europe was likely insufficient, as divisions emerged on how to face Washington.

Trade Commissioner Cecilia Malmstrom spoke as the EU's 28 trade ministers met in Brussels to discuss an attempt to win a similar reprieve to the one handed to China, in time for a June 1 deadline.

They discussed a plan laid out by EU leaders last week for concessions including a limited EU-US trade deal as well as opening up the European market to US natural gas -- if the exemption is granted.

"Is this going to be enough? I'm not sure frankly," Malmstrom told a press conference after the talks.

Europe was hit by the shock steel and aluminium tariffs in March, part of the protectionist president's threat of an "America First" trade war with Washington's closest partners, including Canada, Mexico and Japan.

The US has twice suspended the duties of 25 percent on imported steel and 10 percent on aluminium as talks with key allies continued.

"If we are exempted, then we are willing to engage in talks and see how we can facilitate trade relations," said Malmstrom ahead of a closed door session of which very few details emerged.

She has spearheaded a series of talks with US Commerce Secretary Wilbur Ross, a stalwart of Trump's hardball tactics.

Europeans have struggled to align on how to respond to the Trump threat, with export powerhouse Germany calling for patience and France and the Netherlands urging a tougher line.

"We are allies but we are not vassals. Today is a moment of truth for the EU," said French trade minister Jean-Baptiste Lemoyne.

"With an escalation not only on steel, but also other products, and also with regard to problems with Iran, Russia, we risk a lot more then just economic repercussions," said Altmaier, a close ally of German Chancellor Angela Merkel.

To bridge the positions, the European Commission, the EU trade arm, has said it will refuse all trade talks with the United States unless Washington grants a permanent exemption from the tariffs at the end of the month.

But it is also discussing the concessions that the EU leaders agreed at a summit in Sofia last week.

Europe's incentives come with a threat to retaliate against the US with European tariffs on American imports, including iconic items such as Harley-Davidson motorbikes and bourbon whiskey.

These counter-measures will officially become enforceable on June 20, but Germany is urging not to use them as long as talks with the US are ongoing.

Any attempt to negotiate a trade deal, no matter how small, requires a mandate from member states.

The "limited" deal on offer would focus in particular on cars, a strategic sector that Trump has brought sharp attention to in several tweets that specifically targeted Germany -- an auto powerhouse on its own.

EU leaders insist that there is no chance of relaunching the very unpopular TTIP talks, the major EU-US trade agreement torpedoed by Trump when he entered office last year.

At the request of the United States, Europeans are also ready to "deepen relations" in energy matters, in particular in the field of liquefied natural gas.

As a result of the shale gas boom, the US is avidly seeking new export markets and wants to compete with Russia and Norway, the EU's current main gas suppliers.